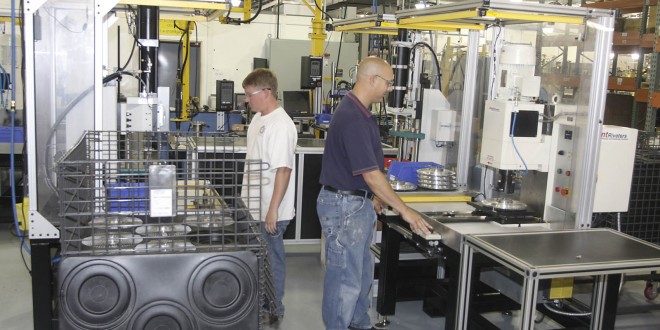 The engine cooling components made at Horton, Inc. are shipped all over the world. Photo courtesy Britton Journal / Horton

Area manufacturers use a variety of recruiting strategies

While the rest of the nation deals with an unemployment rate stubbornly stuck above 8 percent, the Dakotas have a different problem: Jobs that are going unfilled.

The unemployment rate in South Dakota was 4.3 percent in May (the most recent data available from the U.S. Bureau of Labor Statistics). The nation as a whole hasn’t seen an unemployment rate that low since March 2001. 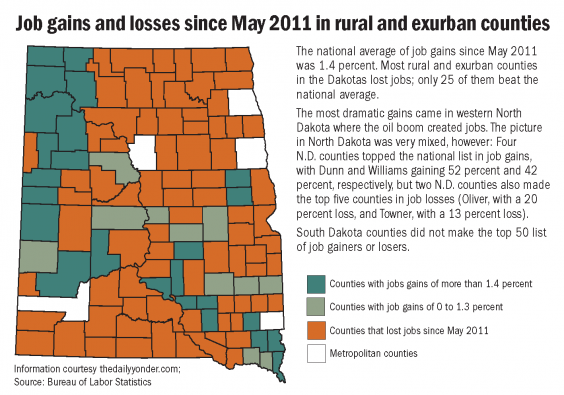 Job Gains and Losses Since May 2011 in Rural and Exurban Dakota Counties. Click on image for a larger version. Compiled by dailyyonder.com from Bureau of Labor Statistics information; graphic by Dakotafire Media / www.dakotafire.net

See more information about the top 50 rural and exurban counties that gained or lost jobs in coverage by the Daily Yonder. 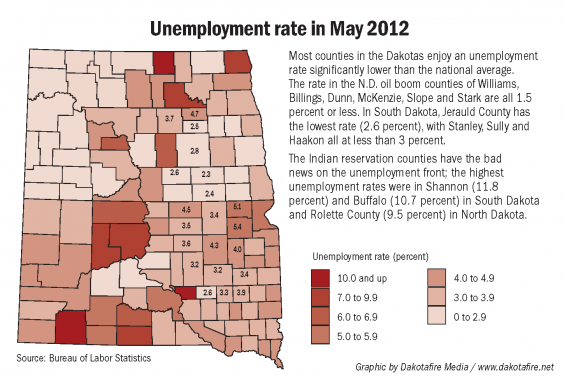 Unemployment Rate in May 2012 in Dakotas. Click on image for a larger version. Information from Bureau of Labor Statistics; graphic by Dakotafire Media / www.dakotafire.net

Dawn Dovre, public affairs director for South Dakota’s Labor and Regulation Department, said North Dakota’s oil boom has had an effect even hundreds of miles away. “We have heard of some workers commuting to the oil fields in North Dakota from the Mobridge, Aberdeen, and Spearfish communities,” Dovre wrote in an e-mail.

The low unemployment rate is visible in the South Dakota Jobs database. The number of job openings logged in the database is up 30 percent from last year—11,381 in July, compared to 8,722 in July 2011. On the other side, the number of workers in the database is on track to be down about 3 percent for the year, if the current situation continues through December.

With fewer people looking for work and more job openings, how are Dakota employers finding the workers they need?

Journalists at Dakotafire partner newspapers talked to two manufacturers to learn about their recruiting practices. 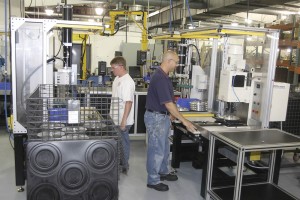 The engine cooling components made at Horton, Inc. are shipped all over the world. Photo courtesy Britton Journal / Horton

Common Sense Manufacturing in Faulkton makes steel farm products such as balefeeders, calf shelters and wire winders. The company focuses on creating products so durable they should never need replacement and will have very low maintenance costs. Their employment varies depending on the time of year, according to Kelly Melius, owner of the company. “In the wintertime, which is our peak production time, we have anywhere from 15 to 16 employees,” he said. “In the summer we have guys that farm or do other things, and we’re happy to let them do that. We’re pretty flexible.”

These two companies have tried a variety of methods for recruiting—some that have worked better for them than others. Here is an overview of some of those strategies.

A strategy that has not worked well

Recruiting from elsewhere.  The high national unemployment rate looked like it might present an opportunity for Horton to find the workers they needed from outside the community. Horton representatives went to a job fair in Michigan, where the unemployment rate had spiked above 14 percent in 2010 (it’s now down to 8.5 percent).

About a dozen people indicated interest, but Horton didn’t end up hiring a single person.

“When it came right down to it, they weren’t moving,” Wieker said. “I think it was about moving to a whole together different type of area, and people still wonder if we actually have running water sometimes. … If they come from a city, it’s tough to swing them over to a small town. They just don’t see the advantages.”

Wieker said they do try to give potential employees an idea of what is great about Britton before they arrive—the company put a video on YouTube that gives a feel for what the community is like.

Melius said even getting someone from just outside the community can be a challenge. “Say I’m on the phone with a prospective employee who’s originally from Aberdeen, and they might not be terribly wild about moving to Faulkton, worrying that there is nothing to do out here,” Melius said.

He added that that’s never been a problem for him. “I’d say that it’s good being in a small community.”

Small communities have additional challenges that have to be overcome to bring workers in from outside the area. Housing can be a significant problem in many rural areas.  Faulkton, for example, doesn’t have much housing available, much less housing that is both affordable and meets the wants and needs of potential employees and their families.

Another sticking point is finding work for a spouse. A small town can provide work for one person, but also finding something that is a good fit for the spouse takes a fair amount of luck.

“If a spouse needs a job in Britton, it’s fairly tough,” Wieker said. “That’s one of the biggest negatives I see in hiring is no place (job) for a spouse.”

All of these factors add up to a significant amount of local hiring. Wieker estimated that the percentage of hires with some sort of local ties is about 70 percent; Melius said most of the people he hires are either local or from neighboring communities.

Strategies with mixed results or some success

Advertising in the newspaper. Melius said sometimes this works really well, and sometimes they have no response.

Starting young and recruiting in high schools. Horton is working on putting together a Power Point presentation to take to high schools in the area in the next school year. They are also planning a machining day, during which they would invite high school students to the plant for a couple of hours to make something. They hope this might spur some interest for a future career.

Horton has also offered scholarships to area students, which would pay for training to become a machinist with the agreement that the student would return for a period of time to work at Horton, but they have had no success with that effort to date.

Participating in state programs. Horton has taken advantage of South Dakota Wins, “a workforce development program that brings together government, education and business leaders to capitalize on South Dakota’s tremendous potential,” according to Gov. Dennis Daugaard’s writing on the SD Wins website.

One aspect of the program helps businesses that are having difficulty filling a position. If a business has a job posted and unfilled for more than 30 days, the job is forwarded to Manpower Inc., which helps the business find someone to fill the position. The State of South Dakota pays half the cost of the recruitment effort. The cost is not assessed unless the job is successfully filled. This has resulted in some job placements for Horton.

Wieker said Horton has also had some success with the Dakota Roots program, which connects people who want to relocate to or return to South Dakota find work in the state. The Dakota Roots program overall, however, has not had as much success in getting people to more rural parts of the state; most of their placements have been to Sioux Falls, Rapid City, Aberdeen, Brookings, Pierre, Watertown, Spearfish, Yankton, Mitchell, and Huron, according to the Department of Labor’s 2011 annual report. Since 2006, nine employees have relocated to Day County through Dakota Roots, nine to Clark County, two to Marshall County and only one to Faulk County, compared with 97 employees to Brown County.

Strategies that have worked

Training current employees for needed jobs. Wieker said Horton has had 25 people who were present employees in positions such as assembler or parts washer train to become machinists so they are ready when positions are available.

Getting referrals from current employees. This strategy has been successful for both Horton and Common Sense Manufacturing. “Mostly we rely on word of mouth,” Melius said. “Our employees have friends or relatives who they can call (when there’s an opening).”

Recruiting in tech schools. “One of the things that really helps us is that we keep going to the schools every year even if we are not really recruiting,” Wieker said. “You start to build a rapport with teachers and students when they see you there year after year.”

Offering monetary incentives. Sometimes the best result comes from just sweetening the pot: Horton has recruited a number of employees through signing bonuses for machinists, and offering to pay for an employee’s moving costs.

Overall, employing a variety of recruitment strategies seems to be doing the trick for both Horton and Common Sense Manufacturing: Neither one is currently hiring. Both companies welcome applications for future needs.