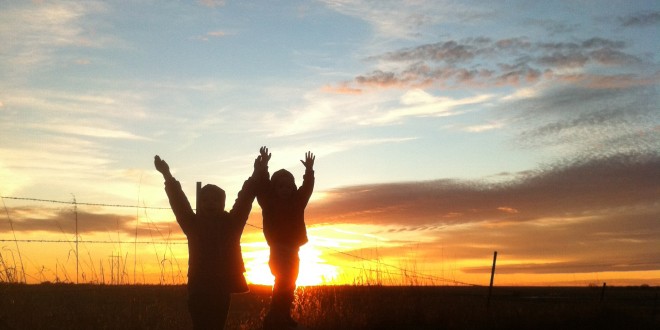 Many rural counties, including in the Dakotas, are seeing a ‘brain gain’ trend

Many young people leave rural communities after high school graduation—but many of them also return. See some of their stories here.

The population statistics for the rural Great Plains, including most of Dakotafire’s territory, present a pretty gloomy picture overall: Some counties have half the population they did in 1950.

Although the overall population trendline is down, there is a bright spot in the data that’s often overlooked: The number of people between the ages of 30 and 49 has increased in many of those same counties.

Ben Winchester, a research fellow at the University of Minnesota Extension Center for Community Vitality, has been working to shine a light on this good-news piece of the rural narrative, particularly in Minnesota but also throughout the nation.

Winchester, a demographer, had read the headlines about the “brain drain” in rural America (as described, for example, in the book Hollowing out the Middle about rural Iowa), but he realized that couldn’t be the entire picture.

“If we’ve been losing our kids (since the 1930s) and nobody ever came back, our small towns would probably have died 50 years ago,” Winchester said in a recent interview. “So there must be something more going on than just losing the kids.”

The trend he found he called the “brain gain.” What happens, he explained, is that rural areas lose young people with a high school education and very low immediate earning prospects. What they are gaining are people with higher education levels (for example, 68 percent of newcomers to rural Minnesota have a bachelor’s degree, according to a 2010 survey), job experience, and networks they can draw upon from their time in the working world. These people can serve as a great asset to the rural communities where they settle, Winchester said.

“We are losing our kids, but if we keep using the term ‘brain drain,’ we are doing a horrible disservice to those people who are moving back,” he said. 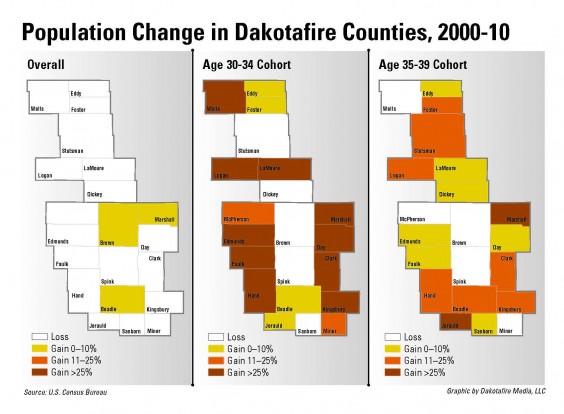 In the Dakotafire region, several of the counties that have had significant population drops overall, such as Faulk, Day and Clark, have also recently seen an influx of people in the 30-39 age group.

Winchester says as he presents this information to different groups around the country, he often hears people say, “Well, that’s not true my town. I haven’t seen them.” He explains that there are several reasons this trend has gone unnoticed.

First, these people don’t have a common profile. Except for their age, their other demographic statistics are all over the board, which makes them less noticeable as a group.

Second, they may not have the same schedule as others in the community. Some commute to other towns for work, and some work from home.

Winchester points out that this trend has been happening, to a greater or lesser extent, since the 1970s—and happening without any real effort by those communities to recruit this demographic.

“What if we did something—anything?” Winchester asks.

Even a small increase in this demographic can have a significant effect on the vitality of the community. When all the numbers are tallied—such as the spending power of the family, the increase in funding for schools, and increase in tax dollars for the community—the addition of one family can bring a $100,000 annual gain to the community, Winchester said.

The nationwide recession and housing crisis that started in 2008 has caused this brain-gain trend to slow down, as people are more likely to stay put when times are uncertain. As the economy improves, however, Winchester says he expects to see more people in their 30s and 40s settling in rural places.

Why are people moving to rural places?

A survey conducted by a group of economic development leaders in central Minnesota in 2010 asked new residents what drew them to the region. The top reasons given for moving to rural Minnesota showed that people are making decisions for quality of life that trump economic factors, according to Ben Winchester, a research fellow at the University of Minnesota Extension Center for Community Vitality.

Jobs were not anywhere in the top 10. Many respondents indicated they were willing to give up some level of pay in exchange for the quality-of-life improvements they were seeking.

Is this a trend mostly about people moving back home?

Many of the 30-49 age group moving to rural places are going home to their roots—but they don’t make up the majority. Only 36 percent of rural newcomers have any previous connection to the community to which they are moving, according to University of Minnesota Extension research.

Many of the newcomers are from rural places—just not the rural places where they grew up.

This means that targeting high school alumni is a good place to start for communities who want to encourage this population trend, but it is reaching just a third of the potential market, Winchester said. One additional idea is looking into what corporations are supportive of the idea of telecommuting (which has the potential to reduce overhead costs and increase productivity) and start marketing to that company and its employees, he suggested.

The University of Minnesota Extension has put together a web page to consolidate its research on the “brain gain” in rural America, including its reports, recruitment strategies for communities and news stories from around the nation about the trend. Find it here: http://www.extension.umn.edu/community/brain-gain/

Send them a link to Dakotafire’s Homecoming Guide.