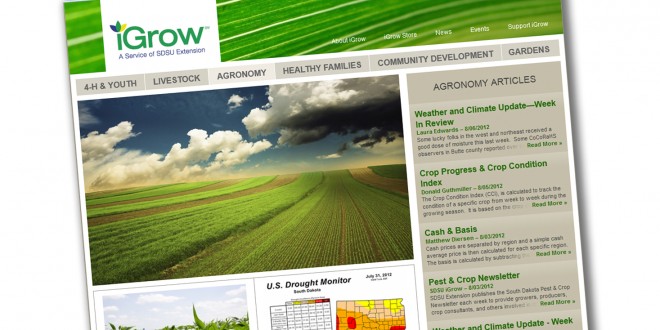 The development of the iGrow website (www.igrow.org) is one of the results of the reorganization of SDSU Extension.

SDSU Extension reorganization is a work in progress

The development of iGrow, an online resource for Extension information, was part of the reorganization plan for SDSU Extension.

About eight months after South Dakota State University Extension went through its biggest reorganization since its founding in 1914, Barry Dunn gives the organization’s efforts a solid B.

“We certainly accomplished a great deal,” said Dunn, dean of the South Dakota State University College of Agriculture and director of SDSU Extension.

But Dunn adds there’s more to be done. Extension leaders hope to improve their results a bit before the reorganization hits a year old, when they plan to give an honest “report card” to the state Legislature on how it’s working.

“It takes time to get a new system up and running,” said Karen Slunecka, who had worked in Faulkton before relocating to Aberdeen as a family resource management field specialist. “It is like starting a new business.”

The Extension program was forced to reorganize last year after the state portion of its budget was cut by 10 percent. This rattled the structure of the organization, which had been little changed for decades.

Having an Extension office in each county was no longer possible with those budget constraints. This is the change that the public is having the hardest time getting used to.

“The county offices were the heartbeat of a lot of those counties,” Dunn said, adding that he’s heard a number of people say they’d like to go back to the old system. “We just don’t have the dollars to be able to do that.”

“They get frustrated by no longer having a local ag educator,” McGraw said. “And they are uncertain as to where they need to go to get their questions answered.”

Dunn agreed that people are still getting used to the regional center concept. “Not everybody knows where those offices are,” he said.

(Regional centers are located in Aberdeen, Lemmon, Mitchell, Pierre, Rapid City, Sioux Falls, Watertown, and Winner. Many 4-H youth advisors are now shared between two or more counties. A map of the new structure can be found at http://igrow.org/up/articles/Extension_Map.pdf.)

Dunn couldn’t be more proud of the people they’ve hired to serve in those offices, however. A new requirement for field specialists is that they must have a master’s degree, or agree to get one in the next five years.

“All our staff are better trained and educated than before,” Dunn said. “They are better able to meet that land grant mission—better able to translate (scientific) information into … the lay language of farmers and ranchers, homemakers, and people involved with youth.”

Karen Mikkelson, an administrative assistant for Extension for 38 years now continuing in the Marshall County office with the Marshall and Day 4-H youth advisor, said people should still feel welcome to come to Extension with their questions—they may just have to relay those questions to a different source. “We are still able to offer the same services,” she said. “We haven’t gone away … It’s still there, just different.”

One of Dunn’s disappointments is that they haven’t yet been able to hire for all field specialist positions, especially those West River. Agronomists are in high demand, and many positions in private industry pay better than what Extension can offer. Dunn added that they are making progress—one position in Winner was recently filled.

They have, however, succeeded in filling all of the newly created 4-H positions across the state, and thanks to those staff members and many volunteers, 4-H programs are going strong, Dunn said. 4-H Achievement Days are going on in many parts of the state right now.

Local Extension agents may not be as close to the public anymore, but the public may not be as likely to travel to their local Extension office anyway. Part of Extension leaders’ thinking during the reorganization was to adapt to the way that people increasingly search for information today: on the Internet, and more specifically, with a search on Google.

With that in mind, Extension leaders developed iGrow, a new online resource for Extension information. “iGrow was designed to remove the factors of time and space from teaching,” Dunn said in an October news release. “It allows SDSU to deliver information and resources to all South Dakotans 24-7. Any time they are interested iGrow connects them to a robust variety of information, in one location—unlike SDSU Extension has been able to offer until this point.”

Dunn said last week that iGrow is living up to those expectations, at least in part.

“It is doing a great job,” Dunn said, “but we still need to get the word out.”

In the online world, getting information to those who are searching for it is a formidable challenge. A Google search for information turns up more information than a person could ever sift through, but not all of it is accurate.

“Google is not an unbiased source,” Dunn said. “If I want unbiased information, iGrow is where I would go.”

One task for Extension is making sure that when South Dakotans search on Google, information from iGrow is near the top of their results. Getting it bookmarked on people’s computers and smart phones is another goal. Thousands are accessing iGrow already, but Dunn expects many thousands more to use the resource once it’s better publicized.

Slunecka, the field specialist in Aberdeen, said iGrow has changed how she does her job. Much of her time consists of producing content—writing articles, publications, programs and podcasts.

“I see fewer people face to face on a daily basis, but have (an effect on) a larger number from the use of technology,” Slunecka said.

Dunn says that the mission of Extension—to bring information from the land-grant universities to the people—is still as strong and as important as ever, even if their methods have changed.

“In this world of information overload, Extension is needed to be the unbiased voice, moving science and technology into the hands of our stakeholders,” Dunn said.

Extension was founded to take the university to the people

The Cooperative Extension Service is a non-formal educational program addressing the needs of citizens and communities in the United States. It receives funding from federal, state and county sources.

Why did the U.S. need an Extension service?

In the nation’s early years, education was for the wealthy. In the mid-1800s, Americans wanted to know more about science and technology, but educational opportunities were hard to come by. A national discussion began on the need for “practical and liberal education for the industrial classes.”

1862 President Lincolns signs the Morril Act, which established the land-grant educational system supporting at least once college in each state. The goal was “to promote the liberal and practical education of the industrial classes in the several pursuits and professions in life.”

1887 The Hatch Act was passed, which provided for an agricultural experimentation station to be created at each of the land-grant colleges.

1890 A Second Morrill Act gives more resources to the land-grant colleges, supports the development of universities, and creates separate institutions for blacks in the South.

1899 All but three states have developed Farmers’ Institutes, where research from the land-grants was demonstrated for farmers.

Early 1900s Boys’ corn clubs are held across the country; boys are offered $1 for the best corn yields.

1914 President Woodrow Wilson signs Smith-Lever Act, which makes the Extension Service the educational arm of the U.S. Department of Agriculture. The goal was to give rural families the education and research generated at the land-grant universities.

After World War II Community and rural development and family living are new areas of emphasis. Extension reaches out to urban areas.

Seaman Knapp believed demonstration was the best way to convince farmers to try a new course of action.

“What a man hears, he may doubt. What he sees, he may possibly doubt. But what a man does himself, he cannot doubt.”