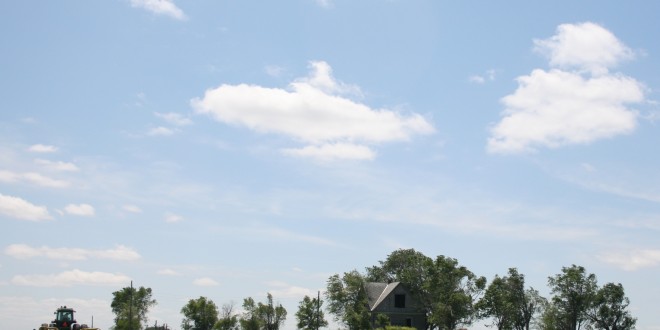 A tractor pulling a land roller drives by an abandoned farmstead in rural Frederick, S.D. Photo by Heidi Marttila-Losure / www.dakotafire.net.

FiredUp: Why rural is not just relevant but vital to our future

What’s the best balance of urban and rural for the healthiest society?

This is an interesting question for me and more than 200 other rural leaders this week  as we kick off the National Rural Assembly in Bethesda, Md. We will hear from U.S. Ag Secretary Tom Vilsack, who made headlines last year when he said rural is no longer relevant to the national political conversation. (In his defense, he was arguing that we need to work to make it more so.) What is our argument for fighting for the vitality of rural places?

Consider that China is involved in the opposing fight. Chinese leaders have decided that at the root of China’s slowing economy is the problem of too many rural people: Farmers don’t spend enough, apparently. They don’t have as much money as their urban counterparts, and people who can supply for some of their own needs don’t do as much as urbanites to keep the economy spinning.

Over the next 12 years, China plans to move 250 million more people from farms to cities. The land will be sold to corporations, and the farmers are being moved into apartments and given small living stipends, in addition to payoffs when their land is sold.

This strikes me as a prescription for disaster.

It’s not as if this idea hasn’t been tried. The New York Times article cites Brazil and Mexico as two other nations that had their own urbanization efforts in the last century. Slums and persistent poverty were the result. China has also pushed urbanizing before, in the Maoist Great Leap Forward of the late 1950s, which turned into the Great Chinese Famine.

The U.S. has of course had its own urbanizing trends, moving us away from our rural roots. The U.S. was shaped in large part by Thomas Jefferson’s vision of a nation of small landowners, which he saw as the best societal structure for democracy: Small landowners have enough power (by way of their own self-sufficiency) so that they are not at the mercy of all government whims, but enough dependency on their neighbors to encourage cooperation.

The move toward urbanization in the U.S. was perhaps not as overtly orchestrated by government as it is now being mandated by China, but few U.S. farmers could fail to feel the push most clearly stated by Ag Secretary Earl Butz with his “Get big or get out” mantra in the 1970s. If they weren’t big enough to “get big,” where else were they to “get out” to but to the cities?

In places where urbanization has been encouraged or forced, unintended consequences have followed. In China now, for example, many of those who moved from the countryside face unemployment–youth kill time in pool halls, and the “old” (one 45-year-old referred to himself as such) play mahjong.

It’s true that these people no longer have to do the work of farming–work that can certainly be both difficult and tedious–but with the loss of that work they also lost their life’s purpose. Uncelebrated as the job may be, producing food is something that has to happen for society to function. Doing that work is an honorable profession, and farmers, though likely tired at the end of the day, could go to sleep knowing they had done necessary work. Can all office workers today say the same? How much paper pushing or widget selling is really necessary, and fulfills that sense of purposefulness that makes life most satisfying? Certainly not all of it. And that assumes that uneducated farmers will be able to make the transition to city living. Some, like the 45-year-old mentioned above, are doubtful they will be able to do so.

They have also lost their connection to the land. With landownership comes rootedness and stability, which can serve something of the same role as marriage as a foundation for society.

Wendell Berry spoke about the “unadapted people” that result when country people move to the city, and the problems for society when there are people who no longer “belong” anywhere. (I’ve mentioned before how meaningful this idea was to me personally in motivating my move back to my family’s farm.) That sense of belonging is one prerequisite to community involvement: If you don’t feel like you belong in a place, why should you make it better? It’s like living in a motel instead of in a home.

I suppose government isn’t required to make sure its citizens live lives with some sense of purpose (even “life, liberty and the pursuit of happiness” doesn’t include a meaningful existence). But one would hope a nation’s leaders would encourage courses of action that are more likely to keep the society functioning far into the future.

Having many people on the land does that; it is in essence a massive insurance policy for the country, in that the means to feed the nation resides in many people with varied skill sets, distributed geographically. If one way of farming doesn’t work anymore, someone else likely has a different method; if pests strike one variety of a crop, another farmer’s variety may prove resistant.

Urbanization goes in the opposite direction. The more that the knowledge of farming is concentrated in fewer hands, the less resilient the farm sector is likely to be in the face of shocks such as weather, war or the end of cheap oil. In this way, holding up efficiency as a goal is a bad long-term strategy, as it eliminates the redundancy that makes the whole system resilient in the face of change.

Ask the Irish who know their history of the potato famine of the 1840s what happens when a nation puts too much faith in one “efficient” solution to feed its population.

There are reasons beyond farming to care about rural places as well: I haven’t even delved into the other good things that happen for a society when its rural places are strong and vibrant (as a small example, the new ideas that can result from a strong connection to the natural world). The importance of recreation and a slower pace of life seem to be getting more attention in current discussions of rural issues, so I’ve focused on the importance of rural places as the source of much of our food, which for some reason isn’t getting as much play in “rural issues” discussions.

So, what ratio of urban to rural makes for the healthiest society? How’s this for a guideline: Rural places need to be strong enough to provide the rootedness of that gives a society some stability, as well as diverse enough in knowledge and skilled livelihoods to insure the nation can survive the shocks we know are coming.