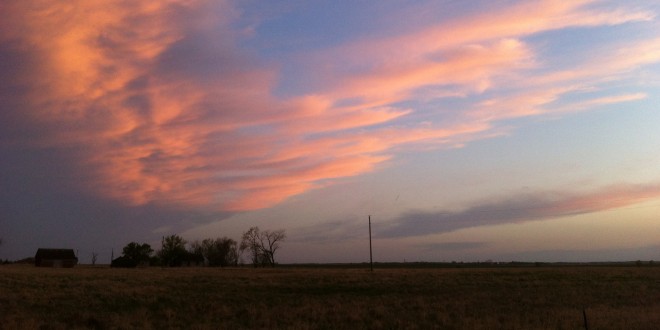 I sent this article off for possible publication in Orion magazine, “a bimonthly, advertising-free magazine devoted to creating a stronger bond between people and nature,” according to the Orion website. It’s topic is timely, so I thought I would also share it here. I welcome your responses! Please comment below.

“Some environments squelch new ideas; some environments seem to breed them effortlessly. The city and the Web have been such engines of innovation because, for complicated historical reasons, they are both environments that are powerfully suited for the creation, diffusion, and adoption of good ideas.”

An energetic male voice spoke this idea from the smartphone I had tucked into my pocket as I walked on a gravel road near my home on a farm in rural South Dakota. I watched the dust rise from the feet of my two old dogs as they walked ahead of me; after two years in which rubber boots were sometimes required to walk my usual routes, the overly wet weather had turned without drama to drought last spring, a drought that had only deepened as the growing season passed. 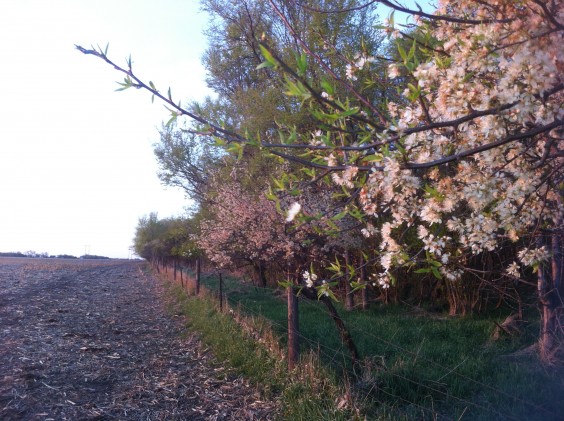 Part of Johnson’s argument resonated with me, as my return to this place after 12 years away was made possible in part by the easy connection of nearly all corners of the world, including this one, via the Internet. When my mother-in-law married a farmer and moved to his family’s farm in Iowa 37 years ago, she knew no one else in her circle of friends had ever read Dostoyevsky; now my college friends and former newspaper co-workers are an easy e-mail away, and I can hear about what they are reading and much more via Facebook. The isolation of winter on the farm that sometimes drove pioneer women insane isn’t likely now—as long as the Internet stays connected. I do my work online, I get most of my news online, and I had in fact connected to this audio book about ideas via the Web—in itself a fine example of the diffusion of ideas. 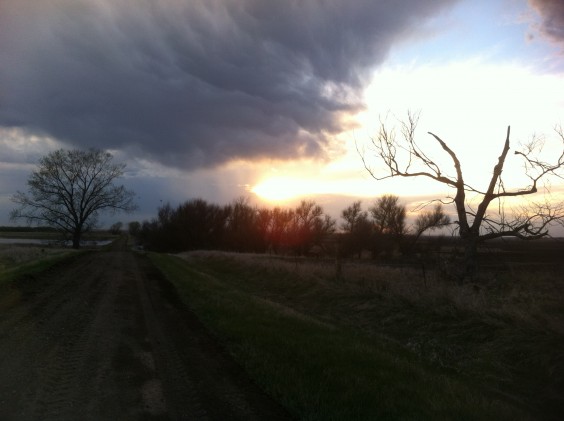 Spring shower on the horizon

But the land I looked over as I walked was far from the urban hotbed of ideas that Johnson described. I am unlikely to see another person on my walks, unless it is planting, harvest, or hunting season, in which case I might get a wave from the driver of a passing pickup. I have two preferred walking routes: One takes me past a grouping of farms, one in each direction of a rural intersection. Today, most farms are a mile or more from one another, but these farms, established in pioneering days, are all within shouting distance. Laughter might have drifted across the pasture between farmsteads; other farmwives would have been within an easy walk for afternoon coffee. Now the farmhouses are all empty. The last farmers left a few years ago to retire in the larger town where their daughter and grandchildren live. 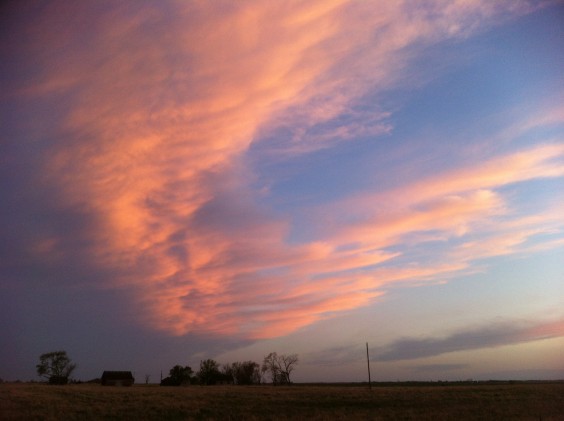 My other walking route takes me to the cemetery where many of my neighbors are buried, as well as my father and many of my aunts and uncles who were raised on the farm where I also grew up, and where I’ve now resettled. There’s not much conversation in either of my walking destinations, and what there is tends to be one-sided. 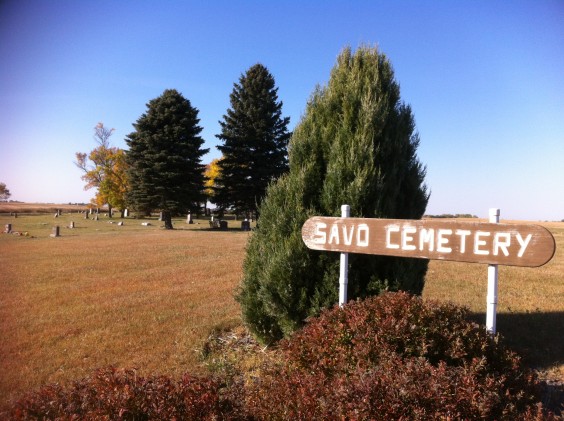 Savo Cemetery, where many relatives and neighbors are buried

So I could see Johnson’s point. He argues that urban coffeehouses are places where people can take their hunches to mingle with other hunches and copulate into truly great ideas; my own hunches have slim pickings for future mates near my rural homeplace.

But I think Johnson has missed a key truth about rural places: If I am unlikely to find any witty repartee on my walk, the land itself provides plenty of serendipitous interactions, and it speaks a truth rooted in the reality, both harsh and beautiful, of the world we inhabit. 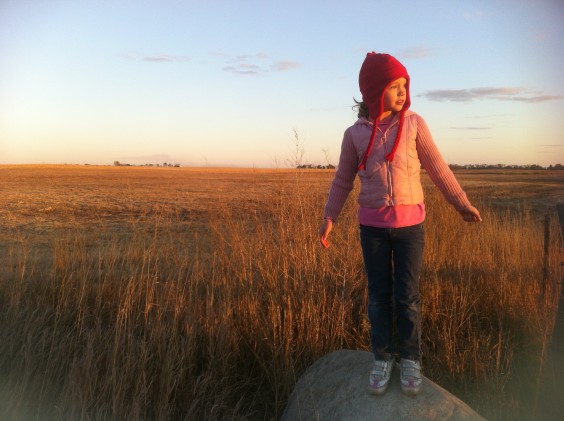 Sofia Losure, age 6, posing on the "big rock" while on a walk with her mom

One day I saw a mink cross the road far ahead of me. I wondered, as I watched it, what a PETA supporter would have said about the sighting. They would have been happy to see it free, I supposed, even if its presence meant that some of the ground-nesting birds in the area would have fewer young making it to adulthood. My thoughts went further: Which was more ethical: Growing mink on a farm, or trapping mink from the wild? Perhaps neither. But these were interesting thoughts that would likely not have come to me in any coffeehouse. Or at least, they would have been abstract, compared to my thoughts as I knew a mink hid in the cattails ahead of me.

One advantage of walking the same ground regularly is that I can see how the land changes as the seasons change, and how it reacts to changes in temperature and rainfall. This fall the grass was parched and near dormant, but trees were green through mid-September. I remember drought years in my childhood when autumn color arrived in mid-August; since it hadn’t, I knew the ground still held a reserve of water from years before. I also know that this is a short-term blessing for trees and crops—the subsoil moisture won’t last without more rain.

I suppose, on walks to and from a coffeehouse over a number of years, a person could observe some similar changes—but it’s more likely that the trees and flowers on the way are watered from a far-off source, and any deviation from the norm is little noticed.

Of course, our rural places have their problems, too. Little by little, the chance for serendipity is being removed. My father and uncle planted corn, but also wheat, oats, barley, flax, and alfalfa. Today, corn and soybeans dominate the landscape. Over the years my father and uncle also raised horses, beef cattle, dairy cattle, hogs, sheep, goats and chickens. Having livestock meant that some land was kept in pasture, which also left room for birds and other wildlife. We are lucky that many farms around us have kept some cattle, which means there’s still pasture left. But the price of corn is just too good. A friend just lost the pasture where she and her husband had kept their sheep for decades—a corner of ground that had never been plowed, where they waited for the native needlegrass to drop its seeds before they hayed in the fall—because the landowner had been talked into making a better return on her investment. 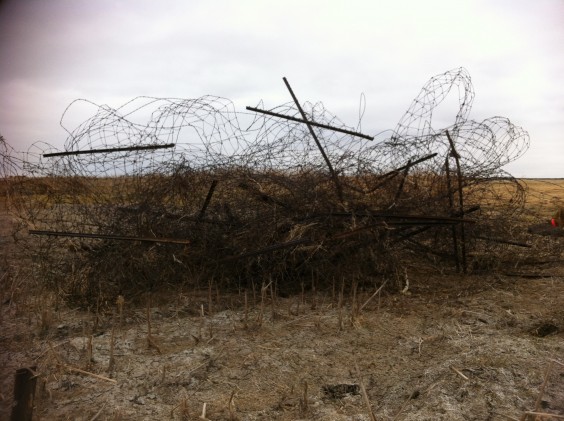 This fall an early harvest means farmers have more time on their hands, so many postponed projects are getting done. Fence is coming out from around many fields; grain farmers no longer need it, since they have no livestock to keep in, and pulling it out means they gain a few more square feet of ground for corn. Shelterbelts, planted to stop wind erosion after the Dust Bowl, are being uprooted and burned; no-till farming does as much to prevent erosion (though with the tradeoff of chemical use to control weeds). The dry summer has done much to dry up the sloughs that took over fields two years ago, but last spring all the talk was about how quickly drain tile could be installed. The price of grain was a motivating factor, but just as significant was the fact that farm equipment has become so large that it is difficult to steer around sloughs extending in uneven shapes across fields. The best field, from a machinery perspective, is one that is uniformly flat and square. 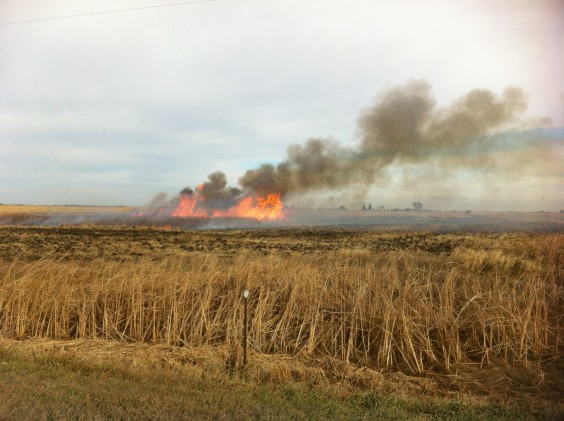 Cattails in dried-up sloughs being burned to reclaim farmland

It’s just too bad that it’s also boring. All of these changes can be argued as being practical or reasonable for the farmer. And as a farmer’s wife I know those arguments. But each of them reduces the chance that something unexpected can happen. The square footage a farmer gains from removing fence and shelterbelts also takes away the little ecosystem that existed where the mower couldn’t reach; draining sloughs eliminates another habitat. Instead of seeing a hawk waiting for prey or a black-crowned night heron taking flight, we’ll see a little more corn.

I can’t argue that we shouldn’t grow corn (too much of our livelihood depends on it). But if we erase all of the natural world that is not profitable, making every inch of land we control as manufactured as the machines we use to plant and harvest, we have erased our seedbed of ideas. We’ve already sent many of our chances for interaction to the cities or to the cemetery; perhaps we could leave a corner of wild here and there just to set the stage for serendipity.

My walk over, I turn the energetic man’s voice off as I start up the driveway. My dusty dogs head for their water dishes, and I think it might just be time for a cup of coffee.

Heidi Marttila-Losure is editor of Dakotafire, which brings together journalists from weekly newspapers in the Dakotas to report on topics of regional interest. Marttila-Losure and her husband, David, live in the granary they converted into their home with their two children, Sofia and Erik. 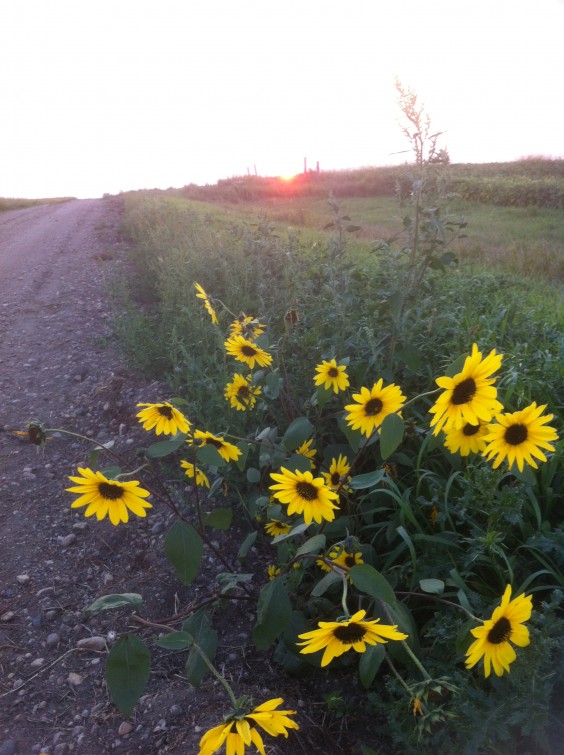