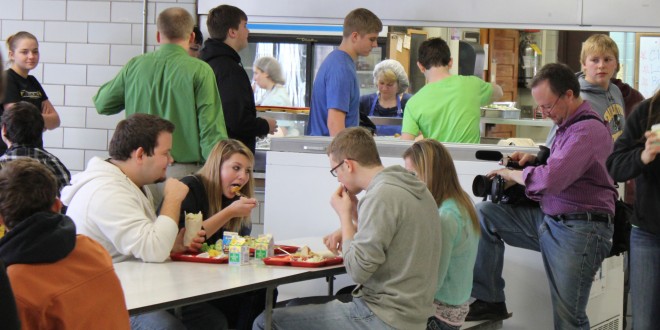 Kyle Ortmeier brought a few guests to school with him on Friday, Jan. 25: a documentary film crew.

“Obviously this goes back to my work on the Youth Advisory Board from the Alliance for a Healthier Generation,” Ortmeier said. “I had no idea that this was coming until about a week before they arrived.”

Ortmeier said that aside from focusing on several case examples of morbidly obese young people, they were looking for people fighting against the trend and people who were finding solutions to the problems.

Investigating the Alliance for a Healthier Generation put them on Ortmeier’s scent.

“I really got a good feeling from Sarah when I talked with her about doing this,” he said. “I wouldn’t have agreed to it otherwise, but I think that this documentary could make a big difference in making this country healthier. This is my home, my community, and I wanted to show it off well, show people why I love it and why I’m proud to be from here, and I think we did that. There are very few schools across the country that have an outright ban on sugary drinks.”

Ortmeier said that the film crew is interviewing him and another youth advisory board member from Oklahoma that has retooled his school’s meal plan.

Ortmeier said that the film crew interviewed him and his mother while they had breakfast (and they wanted them to be eating while they did it). They filmed him walking to school.

“They didn’t follow me around all day, though it kind of felt like they did,” he said.

“They also interviewed Dr. (Joel) Price and Mr. (Craig) Cassens, as well as several other students. They also filmed the whole of my sociology class with Mr. (Randy) Tisher.”

Ortmeier said that it was a little awkward for him, though after hobnobbing with a former president (which he did last year, meeting Bill Clinton after a speech he gave for the Alliance, which is in part funded by the William J. Clinton Foundation) he wasn’t truly nervous.

“I suppose it’s a matter of personal space,” he said. “In this case they’re making a documentary move and though they were personable and professional, and took incredible care not to inconvenience anyone, you still have to open up your life to them as it is, and that can take a lot of you, even if it’s just for one day.”

Except for Andrew Bork, a backup crewman called in from Vermillion, the crew was new to South Dakota winter.

“Sarah is from Hawaii,” Kyle said. “Scott (Sinkler, audio) was from New York and Jeff (Pace, photographer) was from L.A. None of them had ever been any place as rural as Faulkton before and certainly none of them had experienced cold weather. Now, that Friday weather wasn’t so bad, but what we might consider as ‘not so bad’ was very cold for all of them. I did feel bad for them, especially Sarah, since she could have had no idea what she was in for.”

Ortmeier said that they toughed it out and left the school at about 2:45 very pleased.

“Kyle is an amazing example of one kid who makes a difference,” Olson said to the Record on the day of the shoot.

“Now it’s just a matter of waiting to see how it all comes out,” he said. “I know my mom’s impatient to see it, and I’ll admit I’m curious to see it as well.”

Ortmeier said that from what he was told they are hoping to finish production by spring in time for a few of the summer film festivals, and from there to either a movie theater run or a television broadcast or both.

For a related story, see the Hollywood Reporter’s article on the project at this web address: www.hollywoodreporter.com/news/katie-couric-laurie-davidbigpicture-315724.