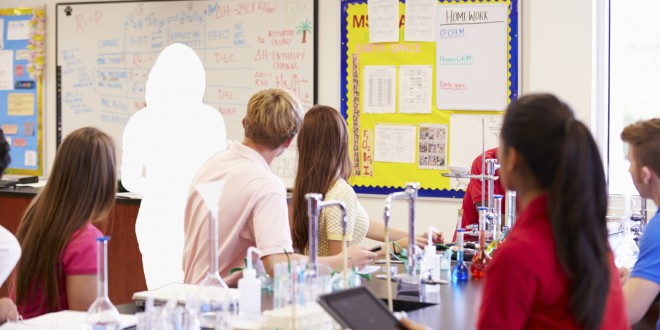 Some classrooms in South Dakota are making due without teachers this year, as approximately half as many teachers came out of college last spring as were needed to fill classrooms this fall.

Some S.D. schools have given up on filling teacher vacancies

With a hope and a prayer, school districts across South Dakota attempted to fill vacant teaching positions this year.

“I must have prayed really hard,” said Monte Nipp, Langford (S.D.) Area School superintendent. “I was really fearing that when our special education teacher left that we were going to have a problem, but the stars and moon aligned.”

Nipp said that special ed teacher moved to Minnesota where he is making $15,000 more than he was in Langford. 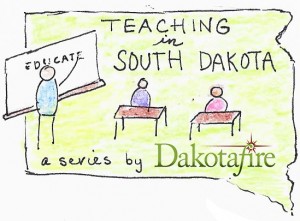 It’s no secret that South Dakota teachers are paid less on average than our neighboring states. Average teacher pay in South Dakota was $40,023 last school year, ranking the state 51st in a nation (including the District of Columbia), according to the National Education Administration. That’s $11,888 less than the regional average (including Nebraska, North Dakota, Montana, Iowa, Minnesota and Wyoming). For years, those who work in education have feared that the South Dakota’s low wages would lead to difficulty in filling teaching vacancies. Now, it appears the prophecy has been fulfilled.

Statewide, there were about 1,000 teacher openings for this school year. About half as many educators graduated from the state’s public universities last year. One-hundred schools started the year with at least one teaching position left vacant, according to Rob Monson, executive director of the School Administrators of South Dakota. Schools had to turn to long-term substitutes or rearrange classrooms to cover the workload.

Now, well into the second quarter of the year, more than a dozen teaching positions are still on the South Dakota Job Service website, and many districts have given up on filling their vacancies.

“With limited numbers coming out of the universities, for one, and us being so low in pay, it’s challenging to for us to get enough people to apply in South Dakota, because they’re attracted out of state and into other industries,” Monson said.

For instance, if five students graduate with degrees in Family and Consumer Sciences Education and five South Dakota school districts have openings, it is possible that few—if any—of the districts will have the opportunity to interview any of them. “When you talk about a pool of candidates, it’s not a pool in each school district. A lot of times, it’s the same pool of applicants looking at all of the positions.”

The lack of teachers has become evident in new ways in recent years, according to some South Dakota educators. Music, agriculture and career-technical teacher vacancies historically have been difficult to fill, according to Faulkton (S.D.) Area Superintendent Joel Price, but now elementary positions, too, have fewer applicants.

Just over a decade ago, one public teacher opening yielded as many as 25 qualified candidates in Faulkton, and each colony position brought in up to 15 applicants. This year, Price said he was “lucky” to have two or three qualified applicants.

“I think that’s more common now, than it is a unique situation,” Monson said. “We’re not just seeing it in rural districts—or frontier districts, you might call them—but we’re seeing it in the larger districts as well.”

The diminishing pool of candidates in nearly all South Dakota school districts proves that more than wishful thinking is needed to fill these openings, according to some officials.

“Thank goodness it’s finally bubbled to the point that the governor has decided to put together the Blue Ribbon Task Force. We’ve known we’re in trouble for quite some time, but we’re at critical mass now,” Monson said. “It’s a challenge for school districts, school boards and school administrators to put quality educators in front of students, because in some cases, they just aren’t there.”

The Blue Ribbon Task Force on Teachers and Students, a collaboration of educators, legislators and others, organized to evaluate the state school funding structure earlier this year. Their final report was issued Nov. 11, following a series of public input sessions and additional analysis and dialog by the task force.

The report includes 30 recommendations, including a $75 million increase in education funding achieved by first reallocating funds as much as possible and then increasing the state sales and use tax as much as needed to make up the rest. With the additional funding, the average teacher salary could increase about $8,000, to $48,000.

The task force only included recommendations in the report on which all 26 members agreed.

“A lot of this was about trying to find themes and messages and issues that a lot of the group could agree on,” Sen. Corey Brown (R-Gettysburg) said. “Since you have have folks from the Legislature and the administration and citizens who represent stakeholder groups, whether it’s superintendents or teacher or businesspeople, to a large degree, I think it was important for that group to find consensus where we could.” 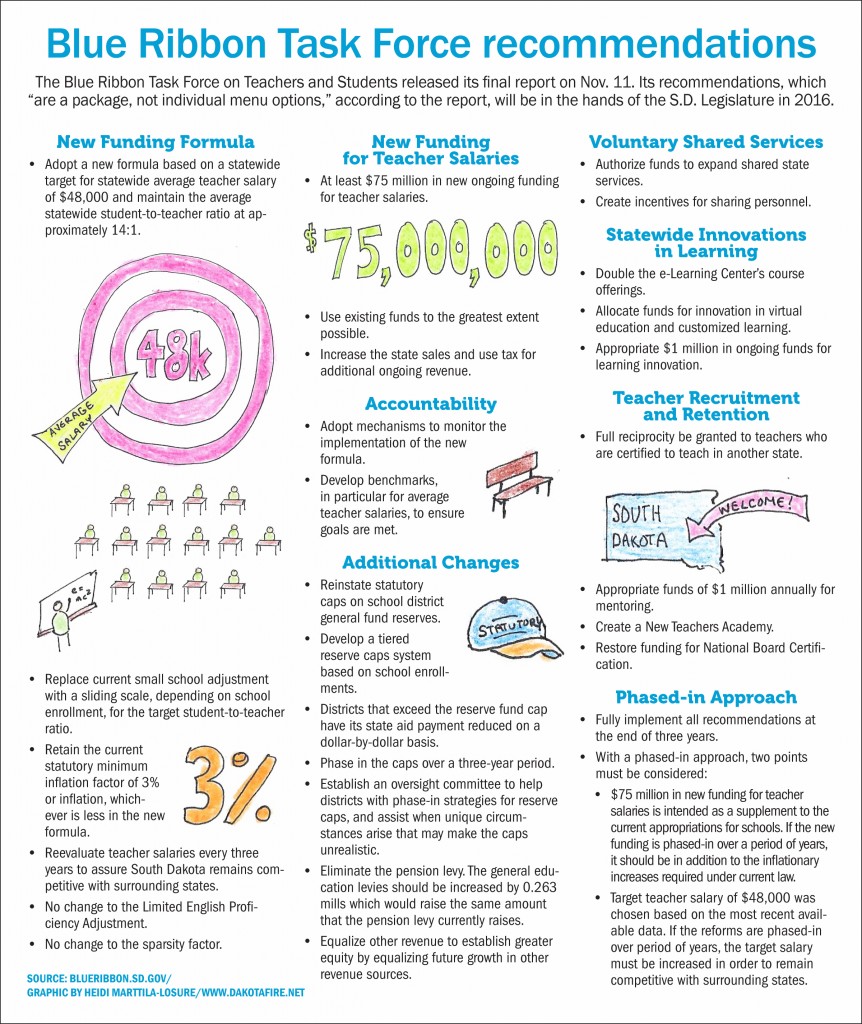 The “what” was the focus, rather than the “how,” which Brown said likely will be debated during the coming Legislative session. But the “how” will determine the likelihood that the recommendations will pass Legislative scrutiny and become law.

“To some degree, this is a partnership with superintendents and school boards across the state,” Brown said. “There need to be assurances to some extent that—if the intent is teacher pay, then that’s where the money’s going to end up.”

If approved by the Legislature, the task force recommends having the strategy in place within three years.

Monson pointed out the fix will not be quick.

“Even if we can get something figured out and get some (future teachers) into the pipeline, we’re looking at probably a five- (or) six-year turnaround before we can see a benefit from some of the actions,” he said.

Editor’s Note: This is the first in a series on South Dakota’s teacher shortage. Read about the following other installments here: