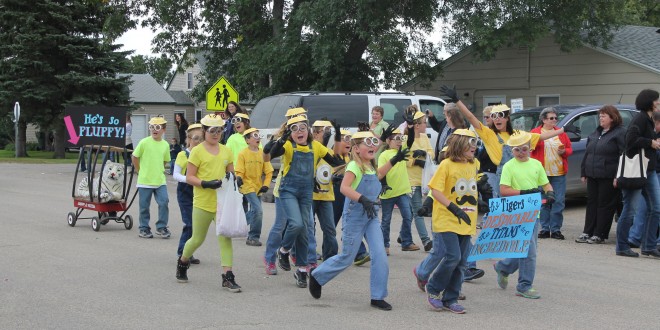 Elementary students march through a homecoming parade in Frederick, S.D. Community-building experts say bringing young adults back into the community starts with events such as homecoming, when alumni are back in town to visit.

Homecoming could have a stronger call to ‘come home,’ expert says

The word “homecoming” suggests the original intent of the fall celebrations was to bring graduates—and the focus of the community—back to the school. In many towns today, that call to come home is no longer the central focus.

One rural expert argues this is a missed opportunity.

“In this part of the country, we’ve had 80 years of out-migration, where a lot of people didn’t think the best opportunities were back in their hometowns, so homecoming did kind of gravitate them” back to those places, said Craig Schroeder, Senior Fellow for New Generation Partnerships with the Center for Rural Entrepreneurship. “It’s a community-based event that brings us back to place.”

Today, as rural living is viewed as a safer, calmer alternative to city life and as telecommunication has brought big business to small towns with the click of a button, Schroeder said, it’s a good time to remind people of their roots and all that rural communities have to offer.

“There’s no denying that the emotional attachment to a place is very powerful, and those memories of growing up in a small town and certainly homecoming and all of the memories that those things bring back are perfect times to connect to that attachment to the community,” he said. “There’s nothing like reconnecting with a classmate who has recently moved back to the community and talking to those people visiting about how great it is to be in a safe community, where I can let my kids ride bike down the street and not have to worry.”

Many invitations required to make an impact

In some communities, alumni still do return for homecoming games.

Ethan, S.D., for example, has not specifically marketed its homecoming game to alumni, but several—especially those who played for the Seahawks—return each year.

“I think people just like getting back and seeing other classmates that maybe they haven’t seen for an extended period of time, and just generally getting back to the community, because a lot of the kids who come back obviously have family that are still here as well,” said Tim Hawkins, Ethan’s high school principal, athletic director and assistant football coach.

Hawkins is hopeful that alumni will attend the game in Bridgewater and then return to Ethan for the remainder of the weekend.

Many communities still have events to reunite alumni and the community, but those reunions now often take place outside of homecoming.

A combined alumni association for the Agar-Blunt-Onida School District, home of Sully Buttes High School in central South Dakota, was created a few years ago, at the urging of the Onida Area Development Corporation. Based on alumni input and community discussion, it also was determined that graduates of the three formerly separate high schools preferred to gather during the summer months, and class reunions now are held during the Sully County Fair.

Many teachers in the ABO School District are graduates of Sully Buttes High School, so additional alumni gatherings during homecoming are “sort of built in,” according to Onida Watchman reporter Sheila Ring.

All of the Dakota towns surveyed for this report primarily gather their alumni in the summer months, when many people say they have more time for reuniting with friends and family.

While summertime alumni events are helpful, Schroeder said the best approach is to make that just one piece of the marketing puzzle when recruiting alumni back to town.

“Communities really need to plan out a progression of engagement opportunities,” he said. “It’s just like advertising. You don’t respond to an ad the first time you hear it. People hear something at least three times before they pay attention to it. It’s the same thing with this work, and you need a marketing strategy. Homecoming can be a big part of that, but it really can’t just stand alone. It won’t have a lot of impact if it’s the only thing you do.”

The key, according to Schroeder, is to continually reach out to alumni, remembering that when the time is right, they will remember the community’s efforts.

Members of the Frederick, S.D., alumni float makes its way through a homecoming parade there.

“There’s nothing like a personal connection,” he said. “You’ve got to have a strategy that once they have come to the community for that event, you follow up promptly with a phone call or email or Facebook post—or whatever it is—to stay connected and invite them to come back again.”

Persistence often pays off, he said, when people are at a time and a place when relocation is possible and advantageous, due to employment and/or family situation.

“With this kind of marketing, it’s kind of like fishing,” he said. “You put your hook in the water, and you never know when they’re going to bite because things happen in people’s lives.”