Print This Post
From a box containing 130 of Robert Cooper’s neckties and an idea, Cherry Frasier, Carol Duncan, Ron Leighty and Kerry Leighty created a very special gift for Robert’s widow, Evelyn Cooper. Most, if not all the ties in question were gifts to Bob from Evelyn or the rest of their family.

It was Kerry Leighty that first had the idea to make a quilt out of Bob’s old neckties. Searching for a quilter who could get the job done was the first challenge. Ron Leighty convinced Carol Duncan to get involved and they got the professional advice and assistance of Cherry Frasier, who The Record has featured a number of times in the past for her quilting skills.

Calling the job a class project (since Ron, Cherry and Carol all graduated from F.H.S. in 1960) together, they worked in secret to prepare the quilt as a surprise gift for Christmas of 2012. Most, if not all the ties in question were gifts to Bob from Evelyn or the rest of their family.

“I couldn’t help but thinking of all the events and places that these ties have been to,” said Carol Duncan in the letter presented with the quilt. “How wise Ron was to realize what these ties meant to both you and Bob. It’s a known fact around the Faulkton area what a special couple the two of you were. You contributed so much over the years to your church and community.

So it’s Ron’s, Cherry’s and my wish for you to wrap yourself up and keep warm in this quilt that represents two lives well lived.” 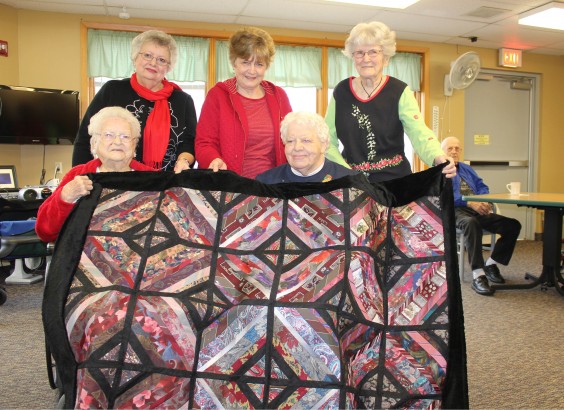