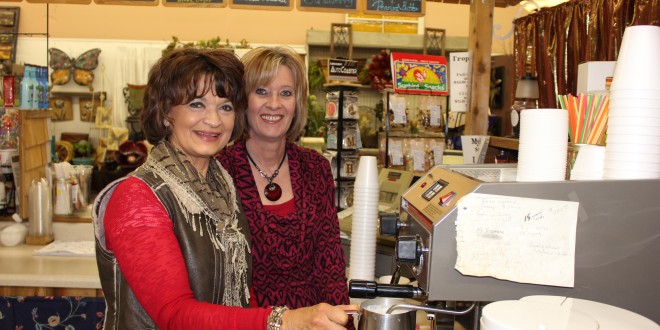 Sharon Huss and JoDee Bryant are retiring and hoping to interest a buyer for their Faulkton business Uniquely Yours.

Wanted: New ownership for a very “unique” Faulkton business. Sharon Huss and JoDee Bryant have decided to retire and are offering their business, Uniquely Yours, for sale.

It was May of 1999, nearly 14 years ago, when JoDee and Jeff Bryant launched a new concept in a Faulkton retail store. JoDee felt there was a way to deliver a wide assortment of services and products to the Faulkton community. They decided to invite a variety of businesses that were too small to make a go of it on their own, and to combine these businesses under one collective roof. JoDee called the store “Uniquely Yours Downtown Mini Mall.” Jeff teased her that no one would be able to spell it, and she responded that is their spelling lesson for the day! “People still ask today how to spell it, so we must still be educating,” JoDee commented.

The business was closed briefly when the building next door burned to the ground on Veteran’s Day, 1999, and Uniquely Yours suffered extensive smoke damage.

Next came the decision, “Can we reopen?” JoDee realized that the business had grown considerably more than she ever thought it would, and she knew she couldn’t continue on her own. She and Sharon Huss joined as partners to reopen Uniquely Yours in February of 2000.

The store’s building was constructed by the late Robert Ketterling as the home of Coast to Coast Hardware. It featured the present stone facade and a spacious interior. That was just what the business partners needed. Eventually as many as 80 vendors were housed in Uniquely Yours.

The biggest challenge was to keep track of what was sold so that the vendors, both renters and consignment stores, got their share of the sales. “We used to do that by hand,” Huss said, “but now a computer keeps tabs on the sales.”

With it’s coffee bar and speciality drinks like smoothies, a regular clientele, from early-morning coffee drinkers to patrons stopping by after work, has made Uniquely into a social center. A bridal registry has also been a big asset for the store, making it possible to pick up that wedding present without leaving town.

“The support and loyalty from the Faulkton area has been wonderful,” Bryant noted.

But more than that the store has built up a regional reputation for its inventory, displays, coffee bar and friendliness. Part of that allure is also the constantly changing displays for which the store is famous. They even won a national contest for a Christmas display.

Another key to the store’s success is long-term and loyal employees. Four of the five present staff were on board from the beginning: Patty Hansen, Diane Hansen, JoDee and Sharon. The fifth, Delilah Cotton, has also been at the store for several years.

Sharon and JoDee said they really want to pass this store on to new owners to continue this service both to their customers and their vendors. “We are willing to work with a new owner during the transition,” Huss said.

But they are serious about closing if that doesn’t happen and have set May 1 as their closing date.