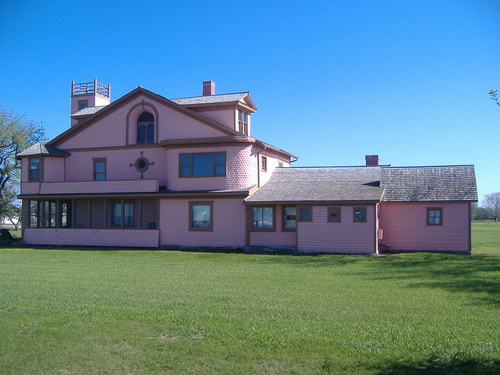 The Pickler Mansion has been a fixture in Faulkton since Major John Pickler first began its construction in 1884. But the will-bequeathed wish of Alice Pickler, that the house be made into a community museum, was not made a reality until 1988.

In 1954, the last locally living family member moved out, and the house drifted into dereliction until 1987. 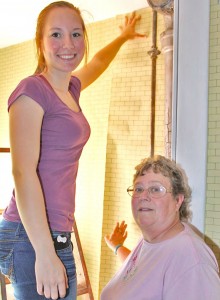 “We went in there in 1987 with the goal of finding Mrs. Pickler’s letters from Susan B. Anthony,” Jody Moritz said. “I want to say that we were just in time to save them, and all the other historical treasures inside. If it had decayed much longer, I’m afraid we might not have been able to save the house, or all the incredibly valuable historical items inside. And I don’t think things would have lasted in the house as long as they did without the watchful eye of Kenneth Wherry, who was first, a deputy, and then the Sheriff of Faulk County. There were break-ins and vandalisms and some small thefts, but I know that because he kept a sharp eye, he prevented anything worse from happening. And since then he’s been a big help to us, and still mows our yard and does a lot of handy man work for us.”

“Anyway, after that first year, the family donated the home to us and we got our first grants to begin restoration work on the house. It was a long process, but we eventually got the mansion into good enough shape that we were able to give tours, and the rest is history. Honestly, it’s hard to believe that 25 years have gone by already,” Moritz continued.

In all, Moritz estimates that the Historical Society has spent about half a million dollars in grants and donated funds to restore the Pickler Mansion and make it what it is today, which is a totally locally funded museum. Work is constant, and ongoing, doing whatever the society can pay for on that particular year. She also noted, that whenever possible, they buy all their materials from local sources.

“We rely on grants and donations for everything,” Moritz said. “This summer we received a grant from the Mary Chilton Daughters of the American Revolution to buy more historically accurate wall paper, and Taylor (Melius) and I are just about ready to put the final sheet in the bathroom. Restoration work is both very expensive and time consuming, but we want it done correctly, to look as closely as it did when the Picklers lived here as possible. Honestly, there is no place like it in South Dakota or perhaps anywhere else. There is the Pettigrew mansion, of course, in Sioux Falls, but they don’t have all of the original furniture like we do, and there is Teddy Roosevelt’s home in North Dakota, but believe it or not our mansion is actually bigger.”

“John Pickler was one of 12 men who truly were the founding fathers of Faulkton,” Moritz said. “He and his wife were very politically active. John was the only member of the US Congress to support women’s rights, and he was ridiculed for it as “Petticoats Pickler.” In the Civil War he commanded black soldiers and believed in equal rights for everyone, man or woman, regardless of the color of their skin. He was a man truly ahead of his time. And he was well matched with a wife just as smart and resourceful as he was. Their house guests included Susan B. Anthony, who stayed here three times, as well as Teddy Roosevelt and Grover Cleveland.”

Moritz said that the go-get it done attitude in the area is in many ways the legacy of the Picklers.

“They believed very strongly in working together to get things done, and planning for the future,” she said. “That attitude has carried through in our town to the modern time, even if people don’t know that is where it came from. We get all sorts of people who drive in to see us,” Taylor Melius said. “Last week it a was a guy from Chicago, who didn’t know a thing about the mansion, but had taken the Route 66 tour and stopped because he thought it looked interesting. He was amazed at the history that was in here, and he isn’t the only one. All kinds of people come here from all walks of life, and they’re amazed by what they find. It’s the kind of thing that makes you proud of your hometown.”

“Taylor has been our tour guide out here for three years now, and our second longest serving summer tour guide after Cathi Keldsen,”Moritz said. “We hope we can have Taylor back again next summer. We have had a lot of interest in the mansion over the years, and tourism is good for business. Even so, I still have to shake my head at some folks who balk at spending five dollars to take the tour even once in their lives. That admission fee helps pay Taylor’s salary, and goes to the restoration work. We rely totally on fundraising, grants and local support. And a lot of us in the Historical Society are getting older too. We always need and welcome community support. We are looking for new members and someone to become a volunteer tour guide for one Sunday a month during our touring season.”