“It was a wonderful feeling knowing that I was helping my grandpa with his cancer and doing what we always wanted to do.” — Devan Collins, student

“I have learned that people really care a lot about the teenagers in their community. They pay attention to what we do.” — Shane McCulloch, student

“I have learned that sometimes you can make all the plans in the world and despite your best efforts, it won’t go the way you planned. … Sometimes you just have to go with the flow and keep getting back up when you get knocked down.”  —Heidi Miller, student

This spring, students in a Lyons, Neb., government class learned an important government lesson: How to be good citizens.

The 17 seniors spent 20 percent of their class time on what they called a “20 Percent” project—something that made a positive impact on the local or global community. The projects ranged from making a neglected basketball court a better place to play to building a boat with a grandfather who had been diagnosed with cancer to making dresses for girls in Haiti.

Having the students work on community projects was the idea of Jamie Horter, editor of the Lyons Mirror-Sun, who approached teacher Derek Lahm about incorporating such projects into his government class. Horter is originally from Bristol, S.D.

The students set some ambitious goals in January—so much so that one of the parents was a little worried about whether they’d be able to complete them.

That parent, who happened to also be Lyons’ mayor, cautioned his son that finding the $2,000 needed for a dock-building project might be difficult in the time allotted.

“Then they started getting some phone calls from community people,” said Mayor Andy Thurston. “’Do they need money for this? We’ll donate.’”

In the dock-building project, what was actually donated was the dock itself. One woman in the community had a dock that her husband had built some years before, and she thought donating it to the class would be a great use for it.

Another community member who read about the project in the newspaper donated a trailer to the boat-building project.

And another reader from across the state donated paint for the students who were renovating the gazebo.

“I don’t think I’ve ever been prouder as mayor, of my kids or community,” Thurston said at a capstone event that showed the community what had been completed by the students in one semester. “This is how communities get better—one idea at a time.”

Lahm told the students they would be missed.

“We’re hoping you’ll be back in our communities continuing the cool things you’ve been doing,” he said. 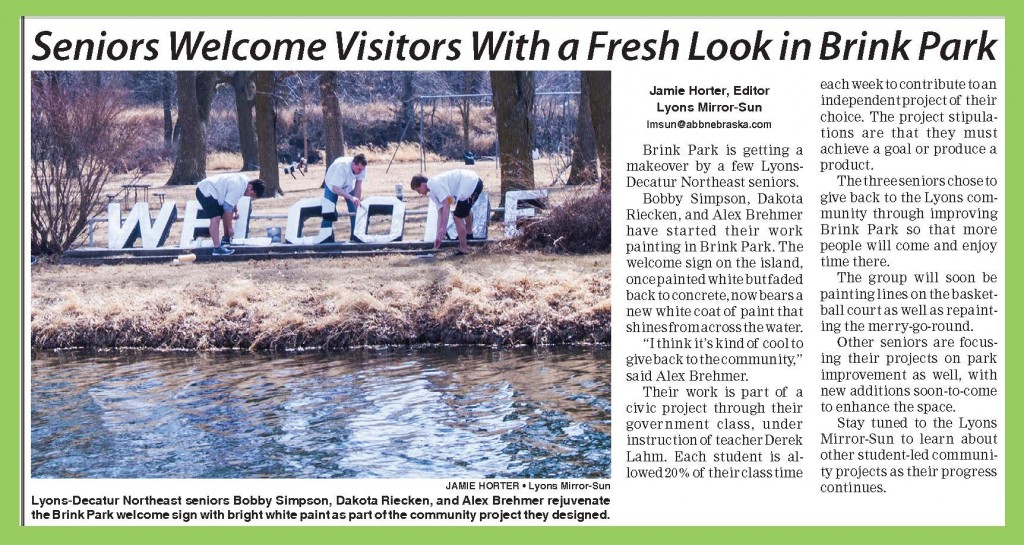 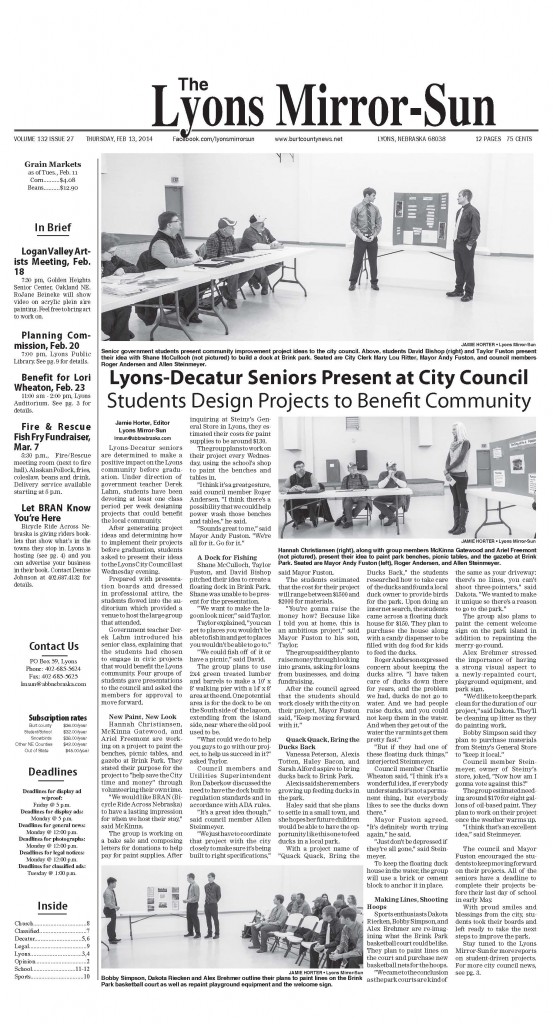 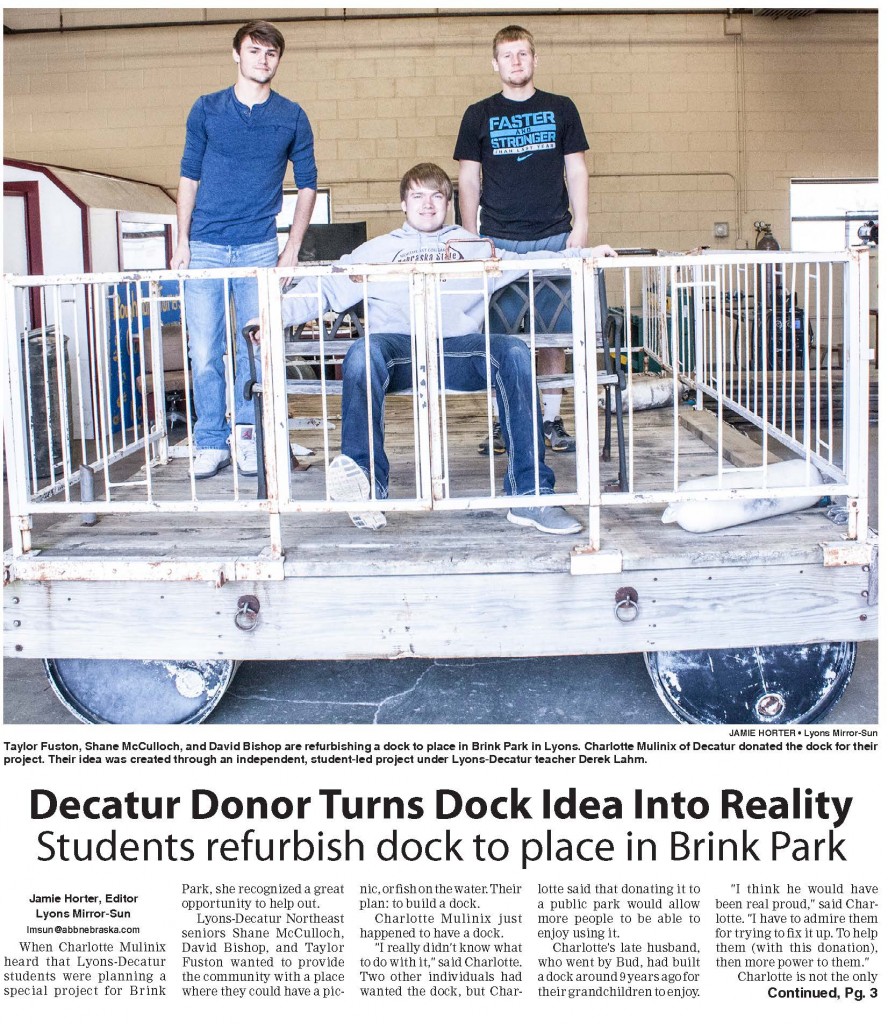 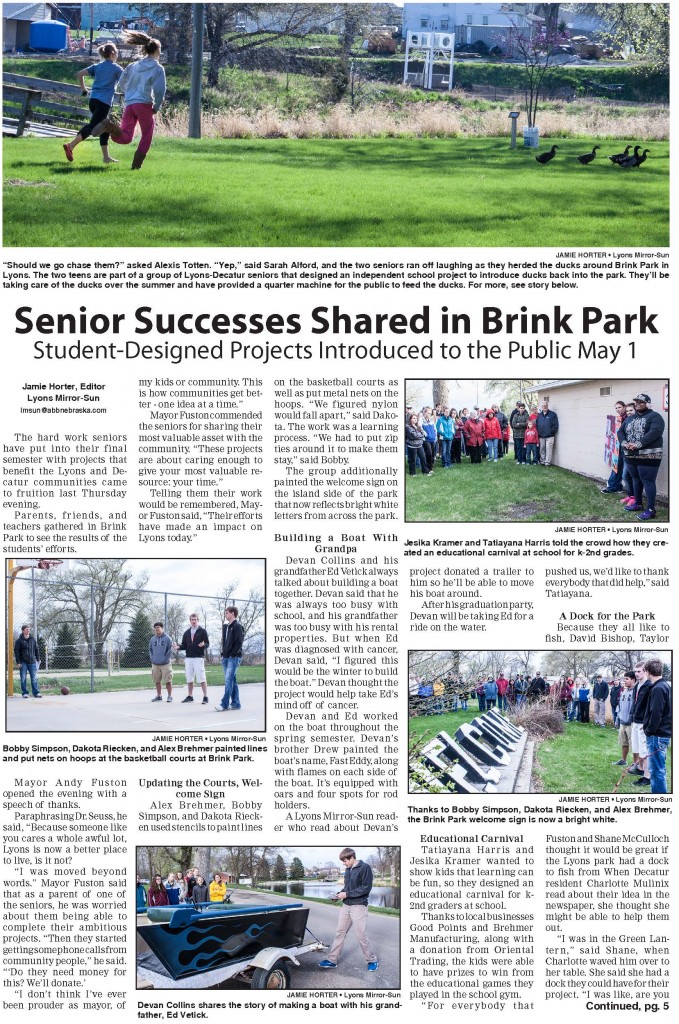 Thanks to Jamie Horter for providing the information for this article from her coverage of the projects in the Lyons Mirror-Sun.