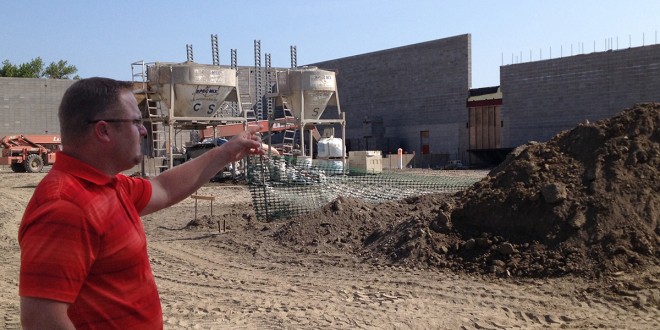 Superintendent Trent Osborne points to a feature on the addition to the Ipswich school. Photo by Laura Ptacek

The talk in many areas of rural education is of declining enrollments and strained resources—maybe not where you’d expect to see capital improvement projects. But some schools in the Dakotas are building. With enrollments no better than the typical Dakota school, they’ve found the resources to invest through community generosity and local ingenuity.

The Tripp-Delmont School District—situated in southern Hutchinson County in the southeastern portion of South Dakota—faced a unique situation a couple of years ago, when a 1939 Tripp High School alumnus Dr. Helmuth Hoff gifted the now-consolidated district with $1.1 million. The funds were earmarked for capital improvement, with an emphasis on educational and physical fitness opportunities for the community at large.

Because the gift came with such a specific purpose, district officials had no choice but to use it to build on to the nearly-100-year-old building in Tripp, despite a 35 percent decline in enrollment over the decade preceding the addition.

But, in case the school ever did close, the school board was diligent in using the funds in a way that would still benefit the community.

“In order to meet the standards of (his) will, this needs to benefit the public,” said then-board president Verlin Buchholz, as quoted by The Tripp Star-Ledger in 2010. “In my mind, the addition needs to be free-standing, at least to some extent, so that, in the event that this building no longer houses a school, the pubic still has access to the library and the wellness center.”

In designing the addition, school officials were careful to ensure that utilities to the old and new portions of the building be kept separate.

The closing of the Delmont facility, which had housed all of the elementary grades from the time the Tripp and Delmont school districts consolidated in 1991 until it was condemned in 2005, caused the kindergarten through third-grade students to hold classes in outlying buildings, including a “governor’s house” behind the high school building and a building two blocks away, which previously had been used as a day care center.

In an attempt to be proactive, the board held several meetings.

“We tried to inform them as much as possible,” former board member Carolyn Peters said. “Everybody was pretty supportive of it (the building project), and I think everybody was happy that we did try to build it independently, so that if the school does eventually close, the community could use it.”

Just the fact that the new building has opened has freed other community entities to improve their situations, too.

Since the addition was completed in 2012, the city of Tripp has moved its offices from the original City Hall building, which had had a leaky roof and other problems in recent years and was noncompliant with the Americans with Disabilities Act, due to the finance office and council chambers being housed on the second floor—has moved into the building that once housed a daycare center, and later a portion of Tripp-Delmont Elementary. And the City’s small library building, which also had had some structural issues, also has since closed, and the City now helps subsidize services offered through the joint city/school library housed within the school.

“The decision for us to build was maybe a little bit easier than it is for some schools, since (the alumnus) did leave us that money,” Peters said. “When he left the money, it was very specific what we could use it for: It had to be for buildings; it couldn’t be for everyday expenses, so it was probably a little easier. At the same time, with declining enrollment (you wonder if you should) invest that money into a building.

“But you do so, hoping that that will attract more families, and you make your building as attractive as you can.”

The addition to the Tripp-Delmont school includes a library and wellness center, both available to the public. Photo by Wendy Royston

Two hundred miles away, the objectives for renovation and addition were similar to those in Tripp, but the decision was more difficult.

“The project was being discussed back when I started teaching here in 2000,” said Trent Osborne, Ipswich (S.D.) Public School superintendent.

Now, 14 years later, the first phases of the project are nearing completion, and students are excited to get into the new building later this year.

“We believe we have the best students and staff, and we wanted to have the best facility to match that,” Osborne said. “It is sad to see the old building go, but people understand that progress is a good thing. They understand that this facility will help to bring new families to town. We have received overwhelming support from the community.”

After several planning sessions, spurred mostly by the fact that new educational strategies require more space for students to interact, larger classrooms, separate commons areas for middle and high school students and added security measures were identified as priorities. Middle school renovations and the high school administration area are scheduled for completion early this fall, with the auxiliary gym, special education area and theater to follow in January. After that, planning will begin for the last phase, to include a renovated kitchen and lunchroom area, lobby and locker rooms. Most of the work has been scheduled for the summer months, in order to interrupt the educational process as little as possible.

Although the Ipswich School District saw a slight increase in enrollment from fall 2012 to fall 2013, Osborne said the improvements themselves cannot be credited with the good news. Most of those students attend schools outside the district due to their parents’ jobs in other communities, he said.

The increase probably won’t be as significant this fall, but families are moving to the area, because of jobs, relatives in the area or taking over the family farm and coming back “home.” Osborne said he really would like to see open enrollment into the district increase as a result of the community’s investments, which include theater and meeting spaces, made available to host professional development conferences, concerts and other events for students and adults alike. 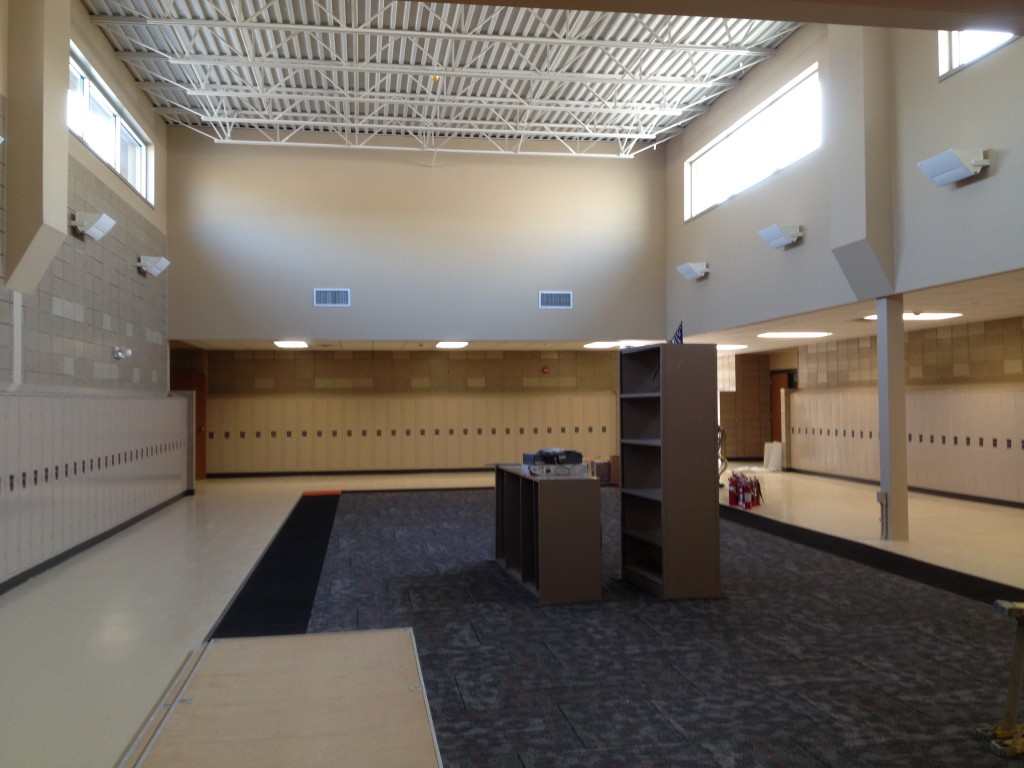 Across the border 80 miles, in Kulm, N.D., perhaps the most unique school building decision of all has happened.

In March, nearly 250 patrons of the Kulm School District gathered in the gymnasium to view building plans that had been initiated by members of the community, not the school board.

“This is your project,” Superintendent Tom Nitschke had said at the meeting, according to The Kulm Messenger, “which is why I’m not here to convince you how to vote. I’m just here to give you the information, so you can make the choice that’s right for you.”

During the meeting, Nitschke listed several areas of structural concern within the district’s buildings, which could more economically be handled with new construction than renovation, according to the Messenger article.

Athletic Director Derrick Bopp said failure to make improvements likely would lead the district to lose the opportunity for any home games.

“We can disagree about the degree of safety in our gym, but the fact is a number of teams already refuse to play us here, and that will only continue. Our annual B-squad tournament is getting harder and harder to fill, and we have already lost the wrestling tournament that was so popular,” Bopp said, adding that those events benefit not only the school, but also community businesses.

“Ultimately,” Nitschke agreed, “we are a small school operating two buildings. There’s no question that time and funds would be used more efficiently if we were to combine buildings.”

At the March meeting, constituents viewed a $5.5 million plan that included a 41,665-square-foot addition with a 5,500-square-foot renovation.

During the meeting, one constituent pointed out that enrollment was expected to increase through 2020, as Nitschke’s projections had accounted for all children already born within the Kulm School District, but that no speculation could be made beyond that point, when the building only would be halfway paid for.

However, Nitschke said the district has been recognized as “small, but necessary” by the state, which will be advantageous in securing funding—particularly if enrollment were to drop—and the idea and decision to build are not based solely on enrollment, but also on structural need.

The project that started with community initiative passed with solid community support—84 percent “yes” on the first vote. Now the community is looking forward to breaking ground.

The school is currently seeking new bids for a winter/spring start date for construction.

Hoven will be looking for new life from school’s ashes

Back in South Dakota, the Hoven School District knows the meaning of “structural necessity” better than most districts, however.

In May, Hoven Junior/Senior High School—which only recently had consolidated athletic teams with the Gettysburg School District—was ravaged by a nonsuspicious fire that started in the building’s attic over the gymnasium.

In a June editorial about the school’s plight, The Aberdeen American News pointed out Hoven’s population slide from 615 residents in 1980 to 406 in 2010 and said, “The Hoven fire felt like a speeding-up of that seemingly inevitable (school consolidation) process.”

To the contrary, however, the school will be rebuilt, thanks in part to its insurance policy, as well as to private contributions.

“In the devastation and loss, Hoven has a unique opportunity to revitalize its town in a way other rural communities do not,” the American News said in the same editorial. “Hoven’s Holy Infant Hospital closed a few years ago. Historic St. Anthony’s Church is going through its own evolution as several area Catholic churches merge parishes. A new Hoven High School could be that centerpiece that breathes new life into the town.”

Since that June article, officials in Hoven have announced that the former hospital, which is situated just across the street from the elementary school, temporarily will house the community’s educational hub until the new school can be built.

Hoven Superintendent Pat Jones said, “The building’s location was a factor in the decision, along with the fact that little work has to be done to get it ready,” according to a report by The Aberdeen American News. “The other option was to bring in portable classrooms. Jones says that would have required more work, including installing water and sewer lines.