Print This Post
South Dakota, and much of the country, is experiencing one of the driest summers in recent years, but water is still the source of frustration for many area producers.

South Dakota, and much of the country, is experiencing one of the driest summers in recent years, but water is still the source of frustration for many area producers.

About 50 people attended a meeting in Britton Monday evening hosted by South Dakota Farmers Union to address the problem of water management in the region and state.

“Water management is really something that touches the lives of everyone in South Dakota,” said SD Farmers Union President Doug Sombke.  “Based on the numbers of acres that were taken out of production, it’s had a major impact on our state’s economy over the past few years and cost the federal government millions of dollars.” 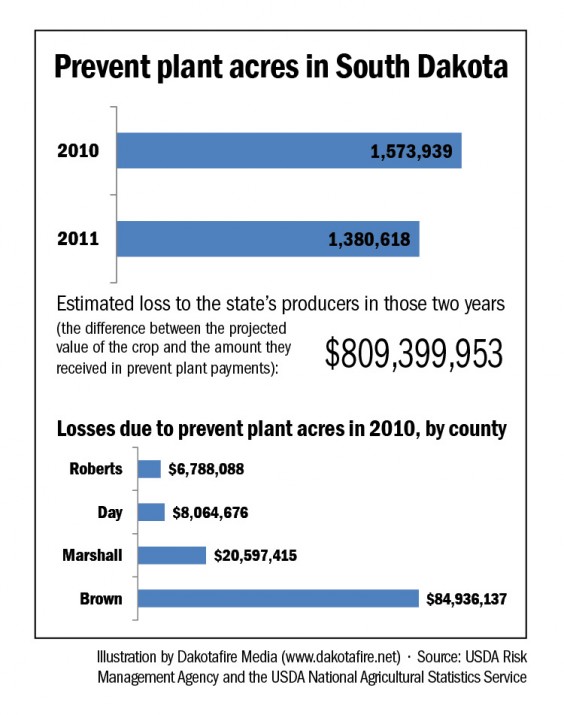 It’s also not just farmers that are affected by the water problems.  Seed, fertilizer, and chemical companies feel the trickle-down effect, as do grain elevators, fuel companies, equipment dealers, and Main Street businesses.

The resounding message coming from attendees at Monday’s meeting was that there really is not a plan to manage the water, and state statutes are confusing and difficult to navigate when it comes to organizing watershed districts.  There are also very few coordinated efforts, even between townships or counties, to try and improve the flow of water.

That’s one of the reasons that the South Dakota Legislature set up a water management task force during the 2012 session.  The group held its first meeting last month and District 1 State Senator and task force member Jason Frerichs addressed the meeting Monday.

“Our main goal is to make some sort of progress in managing water, and we have a lot of work to do,” said Frerichs.  “There’s also a lot of education that needs to take place and public input will guide this discussion.  My hope down the road is that we can set up a regional watershed, but in the meantime we need to look at baby steps to try and get our arms around the issue.”

Roger Rix of Groton, who has spearheaded the recent organization of the Mud Creek Watershed, which includes nine townships and 640 landowners, said the process is difficult due to confusing and difficult state statutes.

“What we envision getting done isn’t a big deal, but it looks like it will be a big deal to get it done,” said Rix.

He appealed to Frerichs and the state legislature to take a look at streamlining the process of establishing watershed districts.

In addition, federal rules are making it increasingly difficult for producers to qualify for prevent planting monies, making it even more imperative to have a water management plan.

“The rules that are set are very difficult to live with for producers,” noted Somke. “Just look at the impact we’re talking about.  This is a big deal.”

Frerichs urged area producers to stay involved in the process.

“One of the unfortunate things is that change is really slow.  But your input is very important, and if people stay involved I think we can move the ball.”