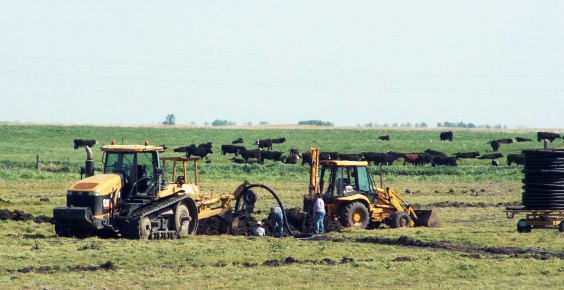 As farmers in the eastern Dakotas worked around the wet areas in their fields this spring—something that’s increasingly difficult to do as machinery gets bigger and as sloughs have spread in recent wet years—they were likely doing a fair amount of math in their heads. How much is that slough worth now, and how much would it be worth if it were drained?

The sight of big rolls of drain tile sitting on the edge of fields waiting for installation shows the answer of that bit of figuring. And the way the farm bill is written could make tiling even more common.

Most agricultural land in Iowa and Minnesota was tiled decades ago, but at that point it was not worthwhile for land in the Dakotas to be tiled. Then in 1985, Swampbuster provisions in the Food Security Act effectively stopped new drainage projects.

But since then, corn can be grown more easily in the Dakotas, and potential profits on corn and other crops are much higher.

“Crop prices have increased dramatically, and producers want to make efficient use of every acre,” said Tom Martin, Natural Research Conservation Service District Conservationist for Marshall County. “That’s what’s driving it. It makes it more economically feasible to invest money in tile, and it probably still would be at $2 corn.”

The 2010 Small Business Jobs Act also inadvertently spurred more installation of tile by speeding up the amortization of improvements, according to Brett Lorenzen, a researcher at the Environmental Working Group who has been studying drainage issues. The IRS interpreted “small business” as applying to farms, so some farmers took advantage of the program to install drain tile.

The farmer’s investment in tile has spurred investments from companies who make and install it. One drain tile manufacturer, Advanced Drainage Systems, Inc., from Ohio, will open a new facility in Watertown, S.D., late this summer, after opening a facility in Buxton, N.D., last year.

“The demand for our products in South Dakota, North Dakota and northern Minnesota has been incredible,” said ADS chairman and CEO Joe Chlapaty in a news release.

The Swampbuster provisions still apply, which means that wetlands cannot be drained if farmers want to stay in compliance. However, water that is pooling in fields but that is not an official wetland can be drained.

So what’s the difference?

Just looking at the water won’t tell you. The NRCS has special teams that travel around to do wetland determinations by examining the plant life and testing the soil.

Martin said the Marshall County office generally receives five or six tiling requests a year. Last year, they had 50. Every one of those requests requires a wetland certification first; multiply that by all the counties where corn and soybeans can be grown profitably, and it’s easy to see where the holdup is. Last fall, the expected wait to get a wetland certification done in eastern North Dakota was three to four years.

More staff has been hired in eastern South Dakota to deal with the increased caseload, Martin said.

If farmers don’t get a wetland certification done before they install drain tile, or if they tile without one, there isn’t a whole lot the NRCS can do about it. NRCS employees don’t carry handcuffs, after all, and even if they did, draining a wetland isn’t a crime.

According to Jake Stich, an NRCS employee in Day County, the agency does not approve or deny projects. “We don’t tell a landowner if they can do the project or not,” he said. “We give them the information they need to stay in compliance, which is the producer’s responsibility.”

The only “stick” the NRCS has is to not allow those farmers to participate in federal farm programs. With crop prices as high as they are, that’s not much of a threat. Many farmers aren’t getting support from direct payments or counter-cyclical payments anyway.

Gary Leistico, an attorney from St. Cloud, Minn., who specializes in drainage issues, said many of his clients are opting to get out of federal farm programs so they don’t have to deal with federal regulations (such as waiting for wetland certifications) when they want to drain.

Leistico, who was quoted in a September 2011 article in the ag publication Tri-State Neighbor, says he urges his clients to think twice about that, because some years down the road they may wish they were still eligible for farm programs.

Depending on how the 2012 farm bill is written, they may not have to choose. The direct and counter-cyclical payments (which farmers hadn’t been receiving anyway in times of high crop prices) are likely to be discontinued, and in their place would be an additional crop insurance program that would help farmers in times of low prices. In the current crop insurance program, which covers yield losses, the government pays an average of 62 percent of the premiums, and payments are likely to be similar for the additional coverage.

The farm bill that came out of the Senate ag committee in May does have a provision that ties crop insurance to conservation compliance, including wetland regulations. But many ag groups are lobbying hard against it.

In an open letter to Sen. Debbie Stabenow in April, a coalition of ag groups said that linking crop insurance to conservation compliance would have “numerous unintended consequences.”

But if crop insurance doesn’t require compliance, farmers who don’t participate in any other farm program will have little incentive to wait potentially years to find out whether they have permission to farm the land hidden under that water.

See related story: What good is a wetland? Putting that value in numbers takes some doing