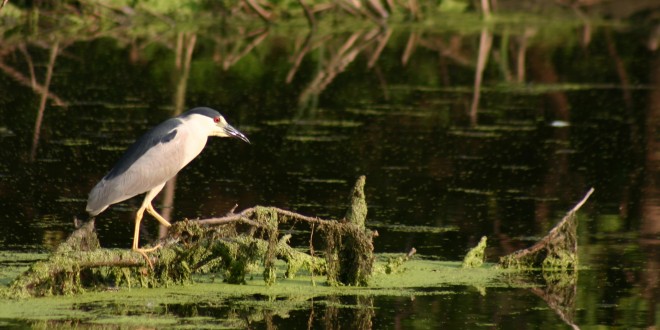 What good is a wetland? Putting that value in numbers takes some doing

A black-capped night heron looks for lunch in a Dakota wetland. Photo by Bert Klipfel of Aberdeen.

A 2001 Environmental Protection Agency paper called “Functions and Values of Wetlands” lists several functions that affect the worth of the land:

Tiling land can also cause potentially costly problems. For example, drainage in one area could cause increased flooding damage in another, which can cause (and has caused) disputes between neighbors.

“It gets real ugly when residents take matters into their own hands,” said S.D. Rep. Brock Greenfield at a presentation about drainage in Bradley this spring.

The fact that drainage is not mapped also presents a potential problem, said Lorenzen of the Environmental Working Group. “(The system of drains) is essentially a sewer system,” Lorenzen said. When a problem appears downstream (such as the widening dead zone in the Gulf of Mexico), no one has a map to try to trace the problem back to its source.

The people who benefit from these functions of wetlands (or who are harmed when they are no longer there) for the most part do not own the land that benefits them, and they also are not benefitting from any one wetland any more than another. They may not even know they are benefiting.

This makes wetland drainage a case of “the tragedy of the commons”: The benefit for one person to drain the land is a much more powerful incentive than the benefits that go to many people if that person leaves the land as a wetland.

The easiest way to stop such a tragedy from happening is to use the force of an outside agent—government laws or regulations, for example, suggests a paper by Raymond de Young from the University of Michigan. However, that approach often backfires, as people don’t like to be told what to do and look for ways around the rules.

A better way to approach the problem, de Young suggests, is for people who are stakeholders in how a certain resource is used to organize themselves into a self-managed institution that works together to define boundaries for the use of that resource. (See de Young’s suggestions for forming these groups here.)

A new organization called the S.D. Regional Watershed Advisory Task Force might serve this purpose, even if it was created by the “outside agent” known as the S.D. Legislature. Organizers hope the 14-member task force will bring together and streamline local water districts to create a unified approach to water issues, including the installation of drainage.

The task force will hold its first meeting sometime after July 1.