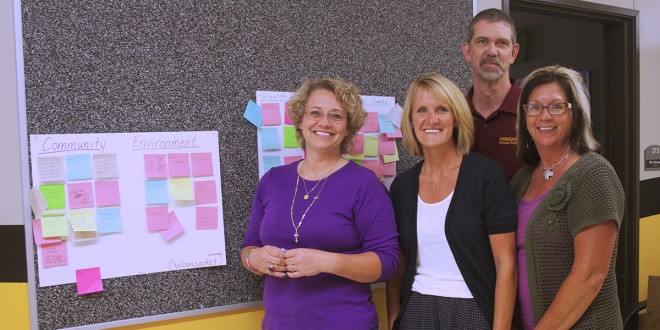 On a Tuesday afternoon in July, when some of their colleagues were probably enjoying a deserved break from the intensity of the last school year, about 60 teachers were in Wolsey, S.D., working on plans for the next one.

And, by all outward appearances, they were having fun.

So much fun, in fact, that Mari Biehl, one of the organizers of the teachers workshop, didn’t have the heart to make them stop when the schedule called for them to move on.

“What a great afternoon!” Biehl said when they finally got back together, which was followed by a “woo-hoo!” from one of the teachers.

It’s a new way of teaching that’s really an old way of teaching, and it goes by different descriptors that may not mean much to those outside of education. But the basic idea is this: Content is taught in a way that’s real, relevant and meaningful to the students.

And when it’s done well, a whole string of impressive things happen: Students are motivated to learn, and they learn more and better. Schools and communities are better-connected, and communities improve in noticeable ways.

This teaching strategy, called transdisciplinary problem-based learning, is catching on in pockets of rural areas across the country. In South Dakota, the best place to find it is through the work of the South Dakota Innovation Lab.

Mari Biehl is now a coordinator for the South Dakota Innovation Lab (SDIL). But before that, she was a second-grade teacher at Platte-Geddes Elementary. She was one of the first teachers to implement the learning model that SDIL promotes, and that experience with it left a lasting impression on her. She decided to do a project on monarch butterflies, and she was planning on implementing the model for only one quarter. But the kids had other ideas.

“My project grew into something much larger than I thought it would be,” she said.

The students learned about the monarch migration, and covered the geography of where the monarchs fly. Then they discussed the kind of plants that monarchs depend on and where they grow. And then they learned that these plants are not as common as they used to be, which is making the monarchs’ numbers decline.

The kids wanted to do something about this. They learned that they could help butterflies by providing them with the plants they need, and so they wanted to plant a garden. They had to determine where the garden should be and who should take care of it. They had a local greenhouse owner come into the classroom to talk about how to plant the garden. And when it came time to present their ideas to the community, all those second-graders went to a city council meeting to present what they’d learned and ask the council to allow them to plant a butterfly garden in a public park.

The difference between this and more traditional classroom lessons is that students are working on real-world problems, and knowing that changes how they approach their work, explained some of the other teachers involved in the workshop in Wolsey.

“(They know) that they are making a difference,” said Cindy Nagel, a former middle school teacher who is now an education consultant for ESA 3. “They are not just doing an assignment.”

“There’s a reason,” added Slim Schneider, science teacher at Armour High School. “It’s not just ‘pleasing my teacher.’ It’s not just ‘what we have to do.’ It’s something they can see.”

Some students get really good at “the game”—figuring out how to take tests, or how to write for certain teachers—but still aren’t successful at life, Nagel explained. “This allows (students) to think and to learn, and to actually apply skills and not just play the ‘school game.’”

The South Dakota Innovation Lab started about four years ago through a partnership involving the Mid-Central Educational Cooperative, Sanford Research, the S.D. Department of Education and the PAST Foundation (based in Ohio).

When it started, four schools decided to participate: South Central, Wessington Springs, Platte-Geddes and Armour. This year, there are 20, Biehl said, including Wolsey-Wessington, where the workshop was held.

What the SDIL actually does is support schools in adopting this new learning model, mostly through training and coaching teachers.

The monarch project has in it the three tiers of transdisciplinary problem-based learning that SDIL works to promote: It cut across disciplines (including geography, biology, math, writing and more). It was relevant to the students where they are (connecting them to their community and their environment). And the children learned the content through the design cycle: identifying a problem, coming up with a solution, trying the solution, evaluating the solution, sharing their ideas and learning from the whole process.

But the monarch project is just one example. The implementation depends on the interests of the teachers and the students, so it looks different in every classroom.

In Wolsey-Wessington, high school students looked at how to ensure good ambulance service in their rural community. In Woonsocket, teachers are planning to have their elementary students learn why their town’s swans aren’t having any nesting success. And in Platte-Geddes, a “Fall Fling” in which students build catapults and trebuchets to throw water balloons at the administration has become an annual community tradition.

It sounds like the polar opposite of “teaching to the test.” (And this may well be the source of that teacher’s “woo-hoo.”)

But what about all the standards? What about Common Core?

And, as Wolsey-Wessington Superintendent Jim Cutshaw sees it, teachers today are actually free from one obligation.

“It used to be that the teacher had to be the content master,” Cutshaw said. “They had to know the information, because if the kids had questions, the teachers had to answer it. Now, with the technology and information available, the teacher being the master of the content is somewhat of an obsolete idea.

“The teacher now has to be the master facilitator—getting kids to find a way to learn the information, understand it and use it.” 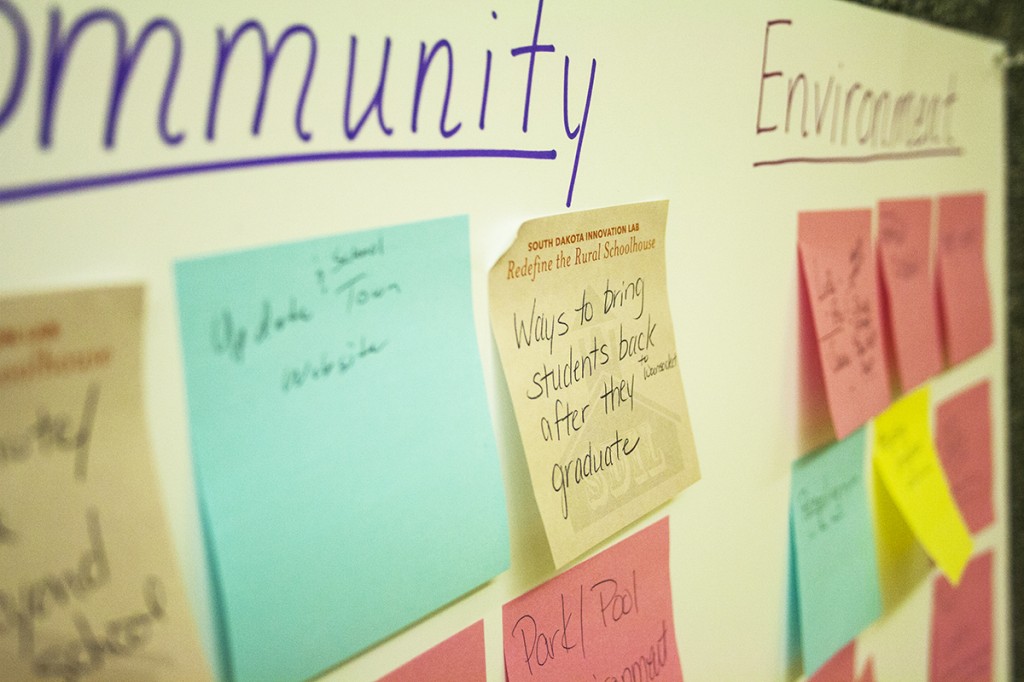 Teachers started their training with a brainstorming session of the needs in their communities.
They organized their sticky notes on a wall. Photo by Heidi Marttila-Losure

Even if teachers are not focusing directly on influencing test scores, the students still need to take them, and those test scores still have consequences for students, teachers and schools alike.

How do kids do on tests after this kind of project-based learning? Better than kids who did not, according to David Sobel, a professor at Antioch University in New Hampshire and an author who has written extensively about place-based education. He cites studies that suggest that test scores start to improve very soon after the program is implemented—and, interestingly, they continue to improve as the students continue through their schooling years. This has happened even in schools where achievement gaps were significant due to poverty or other factors.

The way Sobel thinks this works is that teachers who teach from subject matter they are passionate about invigorate students. And these enthusiastic students are more curious and motivated to learn, which increases their test scores.

Transdisciplinary problem-based learning typically has some aspect of place-based education within it: The problem that the students are trying to solve is made more important to them by the fact that it affects the community in which they live.

“Place-based education is a response to the Berlin Wall that’s been built between schools and the nearby environments and communities,” said Sobel, speaking at a 2012 event. He cited a West Virginia school principal who said that after  implementing place-based education efforts, “We have really opened up the school and taken the walls down so the whole community becomes the school.”

This connection to a place brings with it a whole list of benefits.

One of the first benefits is getting people from that place connected, or reconnected, with the school.

“One of the best things that happened in our district was people who hadn’t stepped foot in the school for 15 years because their kids had graduated … were coming back into the building to help with student learning, serving in that role as industry expert,” Biehl said.

Schneider said the best example of a content expert for his classes was a trip to see Larry Wold, a renowned taxidermist in Armour. His discussion with Schneider’s students was impressive in how many disciplines it covered.

“He told us about his process,” Schneider said. “‘The first thing I have to do is smile when I greet him. And I have to sit and BS as long as they want to BS. I know I have 600 things over here to do, but I have to talk to this guy about this animal he’s shot.’”

From this start in sociology and public relations, he continued into finances, anatomy, art, manufacturing, and more.

“Larry was great,” Schneider said. “We’re going back to Larry with video cameras.”

Making more connections to people in the community means that if or when the school needs funding, there will be that many fewer people who need convincing that supporting the school is worthwhile.

Sometimes the teachers also benefit from a stronger community connection.

“We don’t have a lot of staff that lives in their communities,” Nagel said. “Some of our staff drive hours and hours to get to a school. (Community members) don’t see teachers in their community … When you start doing problem-based learning, that brings those teachers back to the communities, too. (Community members) can see them as people who care about the community. It’s a win-win.”

Sandra Jones, a teacher at Lower Brule Tribal School, said a teacher who connects to the community will also have a better connection with his or her students.

“You’ve got to be a part of them and their community if you want them to participate for you,” Jones said.

But perhaps the best aspect of these enhanced connections with community is the way it changes how kids see the places where they live.

When the students see those community members showing what they actually do for a living, they learn that the community does have opportunities available, and if they have a passion for whatever they are working on, someday they could maybe do it and get paid for it, Biehl said.

It also gets kids to more thoroughly explore their own communities. Jones said she’d been to some conferences where students thought there wasn’t anything of interest in their small towns for a project and went to, for example, Sioux Falls instead. Students, and often adults as well, think that “out there” is better than their community.

“Instead, we’re trying to promote that you may be in a small town, but they have a lot to offer,” Jones said. “We want them to understand that.”

“If you give students the opportunity to practice civic engagement in school settings—working on local issues and local problems—you can actually develop a disposition to be civically engaged later in life,” Sobel said.

Pretty impressive. It might be enough to make all of us give up a “woo-hoo!”

Want to give this learning model a try in your school or community?

Mari Biehl and others at the S.D. Innovation Lab have been working to get the word about about their efforts, but they haven’t gotten to every school or region yet. She’s found that often the best way to get this into a school or community is to start with one administrator or a few early-adopter teachers who are interested and willing to try something different. Convincing others to get on board gets easier when there’s a sign that this can work in this school and community.

Read more about the S.D. Innovation Lab at www.sdinnovationlab.org, or e-mail the SDIL at SDIL@pastfoundation.org.

Thanks to Mike Knutson and Jamie Horter for their assistance in planning for this story.