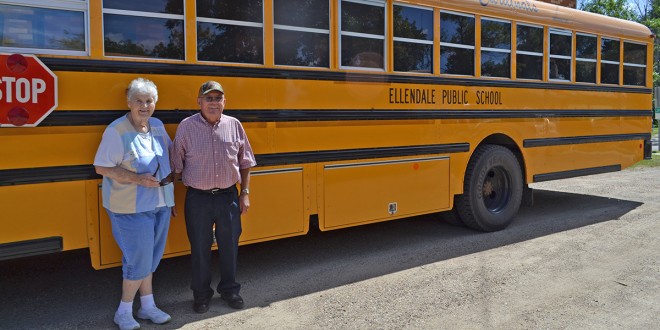 Rita and Calvin Dathe were school bus drivers for the Ellendale (N.D.) Public School District from the early 1970s until Calvin retired this year. Besides his regular route, Calvin loved to drive the bus to school activities because he would get to see his grandchildren play. Because of school consolidations, some of the activity bus trips are now over 200 miles. “Kids have changed a lot over the years,” said Calvin. “Back in the seventies, the kids all did hard farm work such as milking cows and feeding the livestock before school. By the time they got on the bus, they would be tired out. Today, they … immediately start playing games on their phones or iPads or texting their friends.” “Drivers who have a quick temper and do not have a lot of patience will probably not last as drivers,” added Calvin. “I used to bring (the students) Valentine cards, give them gum, and during Halloween, I would wear a funny hat.” Photo by Ken Schmierer

Look around in Bristol, S.D., on a school morning and you might spot three school buses with three different district names on their sides, all in town at the same time. The kids on those buses ride for quite a while before they start their school day.

When the Bristol school closed in 2005, the district officially became part of Groton Area, but students could choose which of the surrounding districts they wished to attend. Some students in the former Bristol district go to Langford Area or Webster Area instead, according to Monte Nipp, Langford Area superintendent.

As part of open enrollment agreements, the nonresident school district often agrees to provide transportation (though this isn’t mandatory—the responsibility for transporting open-enrolled students is the parents’, according to the 1997 law that established open enrollment in South Dakota. In North Dakota, the Century Code states transportation may be provided by either the resident district or the admitting district).

Nipp says that student and family choice through open enrollment has affected the length of bus routes even more than the reorganizations did.

“Back in the ’70s and early ’80s the routes were probably as long or longer because there were more kids. The biggest change is that we didn’t use to drive buses into other school districts,” Nipp said. “You go where the kids are. That’s the sign of the times. We wouldn’t be going to all these other places if not for open enrollment.”

These long distances can lead to long bus rides for some children, which can have a significant effect on the rest of a child’s day. Superintendents in the Dakotas say they do their best to keep the bus routes as short as possible, but open enrollment and school district reorganizations can make this challenging.

One hour is the goal

Many of the superintendents reach for this story said they had the same goal: Kids should be on the bus for no longer than one hour each way. Not all routes achieve it.

“We try to keep the routes to no more than an hour, but they sometimes do get a little longer,” said Brian Jandahl, superintendent at Elkton (S.D.) Public School. “7:00 or 7:06 is about as early as we want to be picking up, and they’re being dropped off here at the school around 8:05 or 8:15, and that allows them time to eat breakfast if they’ve signed up for it. School starts at 8:30.”

Britton-Hecla (S.D.) school buses drive a total of about 600 miles a day, according to Dan Yelkin, Britton-Hecla bus manager.

All buses arrive at Britton-Hecla at 8 a.m., which allows time for breakfast.

The earliest bus headed toward the Deuel (S.D.) School District picks up its first rider at 6:50 a.m., but most start pickups at 7 a.m., according to Dean Christensen, Deuel’s superintendent. “Our goal is that the longest rider would not be on the bus for more than an hour.”

“We don’t have as many bus students as we did 10 years ago,” said Luanne Warren, Clark superintendent, “but our district boundaries seem to grow. Many of our buses go farther distances to pick up students.”

Students traveling on the bus toward the Ellendale (N.D.) School District had the shortest ride of the schools we surveyed: Kids don’t have to get on the bus until 8 or 8:15 a.m., and in the afternoon, “drop-offs will occur right after school is dismissed and should be done within 15 minutes, or 3:45 p.m.,” according to Superintendent Jeff Fastnacht.

Gackle-Streeter (N.D.) students were somewhere in the middle, with 30- to 45-minute rides for the students on the bus the longest, according to Superintendent Duke Larson. “The route miles have remained basically the same over the past 10 years, but the number of stops may have decreased,” Larson said.

The longest bus rides of the districts we surveyed are in Webster Area (S.D.) School District, where some students get on the bus at 6:45 a.m.

“When all scheduled bus stops are made, the longest travel time is approximately 1 hour and 15 minutes,” according to Webster Area Superintendent James Block.

Webster’s distances have been affected by district reorganizations, Block said. “We consolidated with the Roslyn School District in 2010. Our district now spans from south of Wallace to north of Eden (approximately 44 miles) and from east of Pierpont to east of Pickerel Lake (approximately 31 miles). We also transport students from the Groton Area School District that came to our school when the Bristol School District closed in the early 2000s. We attained nearly half the students from the Bristol school at that time.” 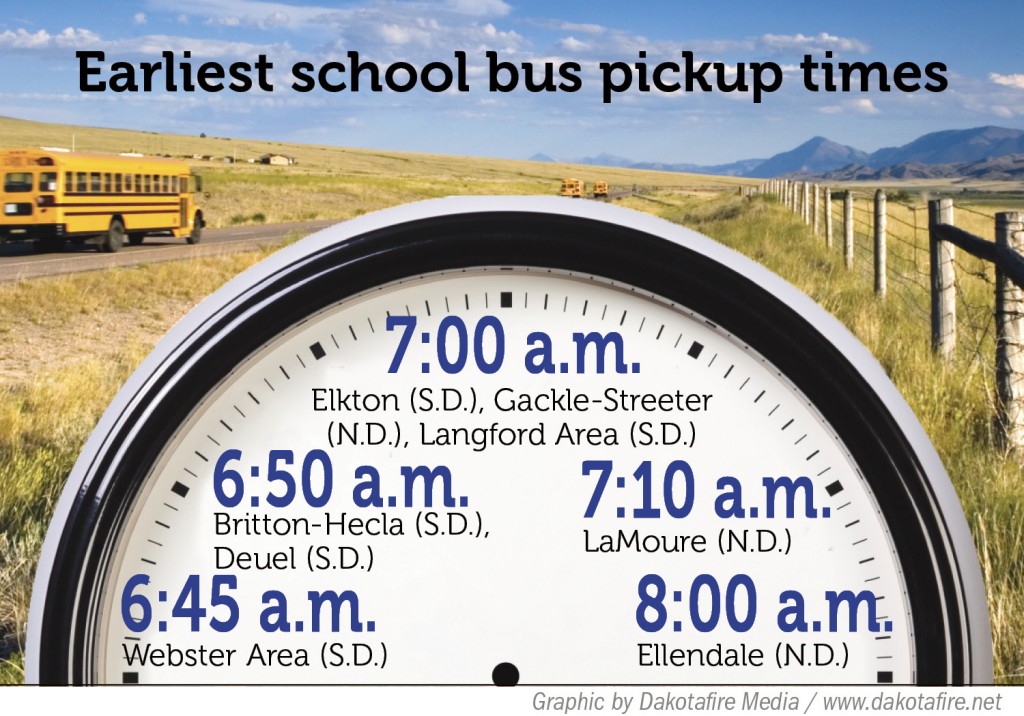 The superintendents said that the duration of the route is affected by weather, and whether parents choose to have their children ride the bus that day.

“They may not want their kids on the bus that long,” said Elkton Superintendent Jandahl. “The percentage of those opting out varies from day to day.”

When students reach driving age, they often opt to drive. “Very few high school kids ride the bus, mostly, I would guess, because they have the freedom to drive and they are involved in many after school activities so they need to drive,” said Deuel Superintendent Christensen. “If they have younger brothers or sisters, they usually ride with them in the morning and may ride home on the bus.”

If fewer kids are on the bus, the route goes faster. Though having fewer students won’t help in the morning unless the bus driver knows ahead of time. At Britton-Hecla, Yelkin now has parents text their plans to him.

“One thing I have done that has really helped is to have all of the families whose kids are not riding the next day text me the night before,” Yelkin said. “I used to have to sit in the bus barn and answer the telephone all day, but now parents text me all the time to let me know if kids are sick, and then I know in advance when we need to send buses out.”

Superintendents do the same kind of figuring as they plan their routes at the beginning of the year, trying to balance efficiency with the length of the routes.

Britton-Hecla consolidated their routes from seven to six this year, according to bus manager Yelkin. LaMoure (N.D.) added a route, going from four routes to five.

“Not because of an increase in kids, but to cut down on the transit time,” LaMoure Superintendent Mitch Carlson said, “especially in the morning.”

What happens on the bus

The length of time that a student rides the bus can affect the rest of the students’ day—both positively and negatively.

Sometimes family life is hurried because students have to get up early and get home with less time before bed. Early mornings can also make it harder for students to get enough sleep (though students can try to catch as many winks as the bumpy bus ride will let them).

A 2009 study called “The School Bus: A Neglected Children’s Environment” published in the Journal of Rural Community Psychology found that some parents surveyed were concerned that time on the bus would allow their children to “mature too quickly” as they watched or listened to older students. This was cited as a reason for some parents to choose to drive their children to school instead.

Researchers cited in the study also talked to former bus riders, who said their time on the bus was a place for social interaction—both good and bad. Many used that time to talk with friends, but others said they witnessed bullying or were picked on themselves.

(Though some did report an upside: “While recognizing the unpleasant quality of some interactions on the bus, a number of our respondents indicated that they used instances of being teased as opportunities to learn self-defense,” according to the study.)

If the student has a bad day on the bus, it can influence their behavior in school, their ability to learn and their sense of security.

“Discipline can be an issue on any bus, just as it can be in a classroom,” said Ellendale Superintendent Fastnacht.

He said Ellendale doesn’t have much trouble with this (“we have good kids and exceptional parents,” he said), but in case, drivers are trained on how to properly deal with behavior issues. This starts with good communication between the driver, parents and principals.

“The best discipline is often just pulling the bus over and waiting for behavior to improve,” Fastnacht said. “Kids want to get home just as quickly as they can, so when the bus is stopped, it tends to motivate all on the bus to behave.”