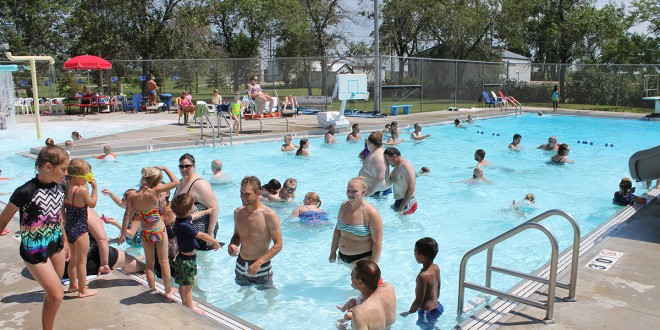 Officials in Kulm, N.D., were worried that they wouldn’t be able to find enough workers for the community pool, but they were pleased to get many new applicants. Photo by Sara Gackle

The Dakotas’ business climate booms in the summer months, with both tourism and agriculture in high gear. Those bustling businesses need more hands to get the work done. Since an increased demand for entry-level workers coincides with a break in the school calendar, hiring for these positions should be easy, right?

While teens and young adults stay busy with academic, social and athletic engagements, traditionally student-occupied jobs such as fast food, pool and nursing home aide positions are often unfilled in the Dakotafire region.

“I saw lots of ‘help wanted’ signs all over the place,” Britton-Hecla school guidance counselor Sheila Anderson said after a recent trip to Aberdeen, S.D. “It looks like people can’t find employees.”

Increasing demands for student attention for academics and extracurricular activities has left young adults with much less time—even in the summer months—to work.

That change has seemed to happen in conjunction with a move away from reliance upon young laborers to keep the family farm or business afloat.

“The kids were expected to work” in generations past, said Craig Schroeder with the Center for Rural Entrepreneurship, citing that 90 percent of Americans were farmers or otherwise self-employed, and relied on the labors of their children. “In fact, getting our kids to school was the problem back then. Now, we’ve had to develop ‘bring your child to work’ days to give our kids exposure to being someplace on a schedule and putting in a full day’s work.”

Student workers are a hot commodity

“We had to extend the application deadline by two weeks, and we still only have 11 lifeguards,” she said. “(We) would like 12.  …  I feel like I’m almost begging people to come.”

In an effort to recruit higher numbers of employees, the City of Britton has increased lifeguard pay twice in the past three years. The starting wage now is $9 per hour, and incentive bonus programs have been developed, in addition to wage increases based on tenure. Six of this year’s lifeguards are returning from last year.

“When I worked as a lifeguard in high school we would have 16 or 17.  Now it seems like the kids have so much going or don’t feel like they have to work,” Sasker said.

Rae Jean Flora, deputy finance officer for the City of Clark, agreed that the young people that traditionally staff the city-managed pool are busy.

“Kids have a lot of things going on these days in the summer time with 4-H, summer sports camps and church camps and various trips,” Flora said. “We’re getting by with the (pool staff) we have. Some just have to work more hours. I’ve got a great group of kids—five lifeguards and three counter people. … Some area pools aren’t as lucky and have more trouble than we do, finding workers.”

Fawn Malone, manager of the Kulm, N.D., park board, said teen employees are essential to seasonal industries, because adults cannot commit to such short-term employment. This year, the board had worried it wouldn’t get enough employees to run its pool, because it faced employing almost no returners, but after a stack of applications was left with the local school, the pool is running with a handful of newly certified lifeguards.

John Hartman, manager of Dakota Butcher in Clark, S.D., said students are an asset to his business, too.

“They are a huge necessity to us and save us a lot of time, vacuum sealing and packing up meat and stocking shelves,” he said.

In general, he said, hiring students from technical schools is easier than hiring high school students, although with the help of adult employees and the local school, he has been successful in filling his staffing vacancies.

“They seem to be eager to work to help pay for their college,” he said. “We have more of them apply for jobs than the high school students.”

“When I was in school, you could be in everything, but I think kids are … spread too thin and having to make some choices, and being a little more selective about what they take (and do),” she said. “Even kids who are well-rounded just can’t fit everything into their schedules.”

Additionally, the state offers dual-credit options for certain high school classes for $40, rather than the $1,000 on-campus fee. Few students take advantage of either opportunity, according to Mittleider.

“Maybe the kids are more involved, and they don’t have time for extra classes,” he speculated.

Anderson said activities have their place in shaping youth into successful contributors to society, too.

“I’m a big proponent of activities for kids. I think they’re important for them to try, because I think they teach you how to work with other people and on a team, and I think it kind of gets kids involved and gives them a sense of comradery,” she said.

During the 2014-15 school year, the Britton-Hecla School District publicly showed its support of student activities through Rachel’s Challenge, a traveling organization created in memory of Rachel Scott, a student killed in the 1999 Columbine (Colo.) High School shooting. The organization aims to create a chain reaction of kindness. An assembly was held with current and former students, who discussed the importance of student involvement.

“Most of those (speakers) were the kids who, when they graduated, or as seniors, were the ones getting scholarships and getting lots of opportunities and being involved in college,” she said.

“One of the great things about summer jobs is that it’s the opportunity to learn about a variety of careers available locally. … Young people … typically aren’t aware that there are a lot of interesting, rewarding jobs available in rural communities,” Schroeder said. “They also get to work on learning the work ethic … notorious for our part of the country, as well as the ‘soft skills’ of coming to work on time, putting in a full day’s work. I think it’s really important to start at a young age with that.”

“Having a summer or part-time job … teaches (students) responsibility, and it teaches them that they have to plan and think a little bit into the future,” Anderson agreed.

Cyrus Albright will be a high school senior in Vermillion, S.D., but already has secured college scholarships that give him the freedom of creativity in selecting his summer employment. He works at Café Brule in Vermillion, but he will spend three weeks this summer working with family in a Vancouver, Canada, movie theater.

“I like to do new things and travel,” he said. “I try to get a new job about every six months so I can grow and change.”

“Technically, it’s my own business,” he said. “I don’t have a boss, and I can work directly with the customer.”

Kandace Kolden of Clark, S.D., said her combination of working at a local senior living center and as a lifeguard helps broaden her interpersonal skills.

In the end, decisions of involvement in either employment or extracurricular activities lie with students and their families, and Anderson said teens and their parents must weigh the pros and cons of adding employment to the mix of student responsibilities.

“Just graduating from college isn’t always what they look at. If you can write down on your resume that you had some jobs in high school, I think that’s helpful, because … it shows those transferable skills that employers are looking for … someone who shows up and is reliable,” she said, but “if it isn’t a necessity, you do … have your whole life to work, and I don’t know that getting a job when you’re 14 is maybe as important as when you’re 17 or 18, because you aren’t going to get to do some of those things again that you can now..”

“It’s kind of a catch-22,” he said. “When you graduate, you might have a pretty clean résumé, you’ve got references from some of the professors for being a good student, the first thing they want to know is where is your experience, and what have you done? … The (potential employer) won’t give you a job unless you have experience. … I think it’s a benefit to have a job during school. … A lot of time that (job or internship) leads to a job.”

Schroeder said schools and communities can work together to foster early job opportunities that benefit student and community alike.

“I think it’s really vital that we supplement the public education in our schools with community-based learning about careers and work ethic and values,” he said, and the investment will return to town.

Building early business relationships, according to Schroeder, can provide smooth transitions from part-time work into internships, into full-time employment, into—eventually—transitioning a business smoothly into new ownership.

“The only way we’re going to get (them) back is to reach out to their generation and create opportunities for them to get exposed to different businesses and careers,” so they know what areas to study if they’d like to return to the area, he said.

Employment also can help ease the transition into adulthood during college, according to Mittleider.

“When you get to campus, having … a job definitely helps you make friends and gives you people to talk to … in a situation where you might not have friends yet and the connections you need,” he said. “Sometimes jobs can help support you and get you going in the right direction.”