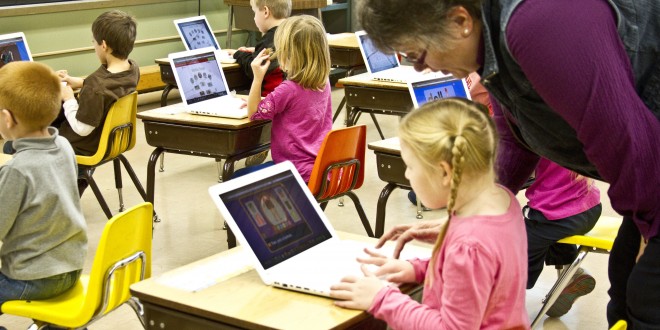 Schools try to take advantage of technology’s benefits, and avoid its downside

When did you start learning to type?

How you answer that question may well show your age. When Baby Boomers were in school, often only business students were encouraged to take typing classes. Generation Xers learned to type perhaps in sixth grade, or maybe not until their freshman year.

With the newly implemented Common Core State Standards, which have been adopted in both North and South Dakota, students in third grade will be expected to be able to type a paragraph in new online assessment tests. To get students familiar with the technology, keyboarding lessons have to start early.

At Gackle-Streeter Public School, for example, kindergartners use Mac laptops for keyboarding lessons. And even before that, the pre-kindergarten class uses iPads for some learning. The computer access extends through the elementary years, to junior high, when students can check out computers for their use, and high school, when students are issued laptops for their use at school and at home. Most schools in the region have a similar structure, in which access to and responsibility for technology increase as students get older.

The Common Core Standards expect that students use technology as part of the learning process. Students will be expected to use the Internet for research, and some of their reports will be in the form of audio and video.

Some parents might wonder what this means for their kids. Haven’t the headlines been saying that too much screen time is bad for children? If that’s true, then why is technology such a key part of the new standards?

The answer isn’t black and white. Experts and local educators suggest that with this technology, as with most new technology that humans have encountered over the centuries, whether it’s good or bad depends on how it’s used.

Digital natives, for good and ill

No matter when children encounter technology in school, it will be a first-time experience for very few of them. In a recent survey, 90 percent of parents said their children had used or watched a screen before the age of two, even though the American Academy of Pediatrics (AAP) recommends no screen time at all for children that young.

And the time children spend with screens has increased dramatically even from just a few years ago. A Oct. 28 report from the AAP found that an average 8- to 10-year-old spends nearly eight hours a day using or viewing a screen of some kind. Older children and teenagers spend 11 hours a day with such media.

“Young people now spend more time with media than they do in school—it is the leading activity for children and teenagers other than sleeping,” according to the report.

This is no small change in the way children spend their time, and the use of technology is changing how they think.

“The ubiquitous use of Internet search engines is causing children to become less adept at remembering things and more skilled at remembering where to find things,” writes psychologist Jim Taylor in Psychology Today. “(K)nowing where to look is becoming more important for children than actually knowing something.”

Emery Lindgren, a technology in education instructor who teaches a class called Invention and Innovation in Kulm, recognizes that change and integrates it in his lessons.

“It is less important to me that kids know when D-Day happened than that they understand if or how it could ever happen again,” Lindgren said. “They can plug the when question into Google and get the answer, but know the why question is what’s really applicable down the road.”

But technology use may also take a toll on students’ ability to focus. Johnson said there may be a connection between screen time and decreased attention span.

“With computers, everything is fast-paced compared to the slower pace of a teacher talking in the classroom,” Johnson said.

Most discussions about children and technology have this on-one-hand, on-the-other-hand feel to them. Here are some of the negatives that researchers have recently connected to excessive screen time:

Problems such as these are why the AAP advises parents to limit screen time to one or two hours per day, to establish “screen-free zones” in the home (such as the dinner table and children’s bedrooms), and to help children evaluate the messages they receive through technology.

But there are also significant positives associated with technology, especially in the classroom. Many local educators are working to take advantage of the benefits that screens can provide.

One new idea that has local educators excited is the flipped classroom model.

Instead of teachers giving a lecture and students doing exercises at home, the teacher records a lecture that students can watch either at home or in the classroom, but at their own pace—the video, or parts of it, can be watched as many times as needed for full understanding. Then the students work on exercises in class, when the teacher is available to answer questions.

Leola is adopting this model in some classrooms, and Frederick Area is exploring the option, according to Justin Downes, Frederick Area principal. Many studies have shown that students learn better when they are more in control of their own learning, and the flipped classroom model facilitates that, Downes said.

Using technology in the classroom also recognizes that we live in a digital world now, explained Joel Price, superintendent of the Faulkton School District.

“Our students are digital natives, having never known a time when a computer was not available for their use,” Price said. “It provides a window to the world that a textbook or worksheet never can.”

A consortium of schools in North Dakota can take advantage of the technology available through a tech center in Oakes, which supplies the schools with various technologies on a rotation. Kulm Public School recently had the use of a flight simulator.

Technology can also make teachers better by providing more immediate feedback about how students are learning. Tami Kramlich, elementary principal at Kulm Public School, said a program called Discourse allowed teachers to ask students a question, and they replied at once via their devices, which gave the teacher a picture of how the lesson had been received by the students. He or she could then adjust teaching accordingly. The program is no longer used at the school, though Kramlich said she wishes they still had it. Similar programs are in use and being promoted for use nationwide, and in fact are part of the argument that educational leaders are making for increased use of technology in classrooms.

Some critics have questioned whether all this use of technology will lead to problems down the road. For example, neuroscientist Jay Giedd worries looking at screens might take the place of interacting with teachers and other students.

“(A)n enormous amount of the change in the adolescent brain is about socialization. What if we’re inadvertently interfering with development in ways that will show up in 20 years in ways we didn’t expect?” he asks in a September New York Times article.

Other experts, however, such as the Fred Rogers Center for Early Learning and Children’s Media, suggest that learning through technology can be beneficial to children, but that educators need to think carefully about how that technology is used. 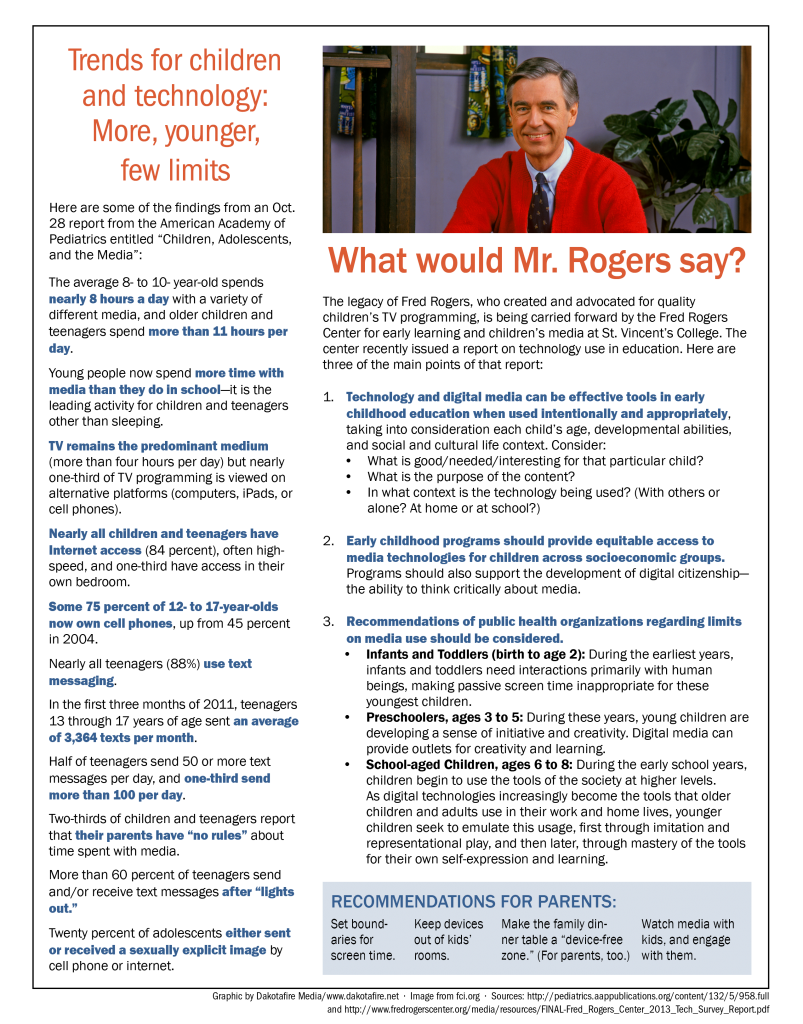 Children and Technology: Trends and Advice from Mr. Rogers

The educators interviewed for this article weren’t concerned about the use of screens in classrooms leading to too much screen time.

“It is extremely supplemental,” Kramlich said. “As a parent of four Kulm students, two already graduated, I know they’re not getting an overabundance.”

In Kulm, “there are no apps on the devices except educational apps,” explained Jill Gunther, technology coordinator for Kulm Public School. “Only the teacher or an administrator can upload to the device.”

The AAP advises schools to include technology as part of the subject matter: Children need to learn how to use technology responsibly, and how to evaluate the messages they receive through it.

Lindgren said his lessons include thinking critically about technology.

“One of the things I constantly go over with the kids is the question, ‘Technology is good, but how is it bad? What’s the downside of every piece of new technology?’” Lindgren said.

Recognizing that technology can have a bad side is important, but not using technology at all would be even worse, leaving students unprepared for the fast-changing world they are going to live in, according to Lindgren.

The jobs that his students will get don’t even exist yet, he said.

“How do you prepare them for something that no one has imagined yet?” Lindgren said. “I think the answer is to embrace the technology, expose them to what it is, and hope that they are then able to catch on quickly to whatever new technology their future job uses.”

What do you think about the use of screens in the classroom?
Please comment below!