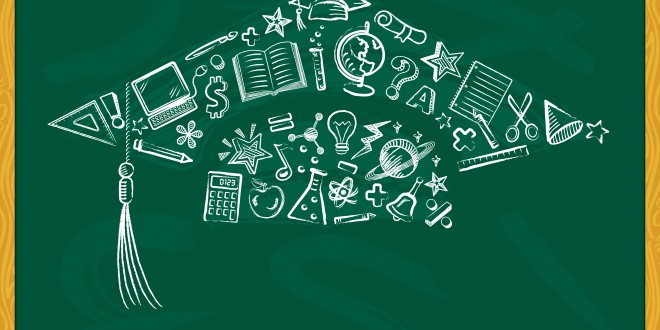 As spring finally approaches, high school seniors are making serious plans about their next step after graduation.

A growing number of those students from rural places will be attending post-secondary education this September, studies show. However, they will still be greatly outnumbered on campus by their urban counterparts.

Both North and South Dakota perform well above the national average when it comes to high school graduation rates, but nationwide, graduation rates between rural and urban students are almost too close to call, accepting a margin of error: 83 percent and 86 percent, respectively. However, the discrepancy between rural and urban residents who have any amount of post-secondary education is a full 13 percentage points: 46 percent and 59 percent, respectively. So, why doesn’t that high graduation rate translate to post-secondary education the way it does for the urban population? 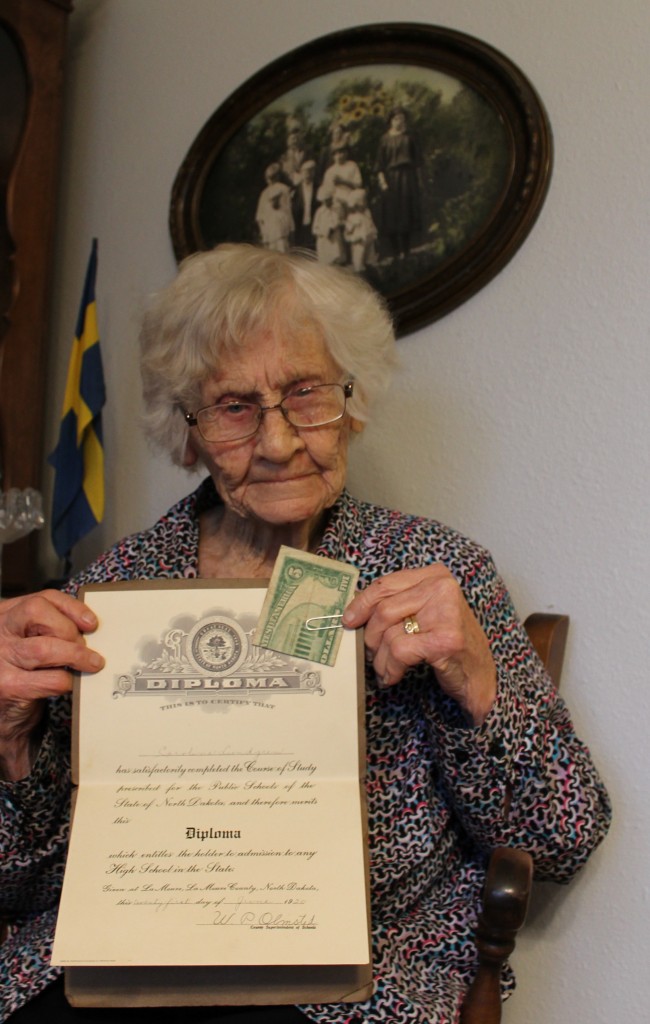 “When I graduated the eighth grade, Papa gave me $5 because he said I did such a good job,” Caroline Lindgren said. “Then he said, ‘But don’t spend it.’” True to her nature, she followed his advice. Photo by Sarah Gackle

It’s possible that the rural attitude toward further education stems from a long history of prioritizing hands-on experience. Ninety-six-year-old Kulm native Caroline Lindgren was the middle child in a family of seven kids. Only the youngest three (all girls) finished high school.

“Even high school was sort of unnecessary,” says Lindgren, who only finished the eighth grade. “I stayed home and worked at my dad’s farm until I got married. Papa would always say in Swedish, ‘You that are light on your feet, will you do this, do that, do that.’ We milked a lot of cows.”

Replace “high school” with “college” and you find Lindgren’s perspective on the importance of education reflected in current statistics. A study conducted by the USDA’s Economic Research Service compared rural and urban residents who graduated high school and those who received any post-secondary education. Although percentages are higher in N.D. and S.D. than the national average, the discrepancy between rural and urban education is similar.

Linda Seefeldt, who taught at Bradley High School before pursuing her current career as co-owner of Clark Flower & Gift Shop, said other factors might be at play in students’ decisions.

“They probably don’t get the information on scholarships and opportunities as much … as the urban kids,” Seefeldt said. “Many may be help­ing on the family farm or business and can’t go. Or, they may plan to go to college later and then never do.”

The good news is that rural education gets off to a fairly good start in many Dakotafire schools.

Kulm High School Principal Derrick Bopp estimated 90 percent to 95 percent of KHS graduates begin post-secondary education, and Faulkton Area Schools Superintendent Dr. Joel Price estimated 80 percent. However, both men said many students who begin four-year degrees tend to transfer back to a two-year program. Bopp said their reasoning is often good: “Why accrue more debt, when they can get the job they want?”

So, at least for many rural schools in our area, the question isn’t, Why aren’t our students reaching for higher education? The questions is, Why doesn’t the rural life attract those educated students back?

The USDA study’s authors applaud rural communities for their investment in their young population, but point out where their strategy falls short:

“Rural communities view increased investment in the knowledge and skills of their youth as an important part of a long-term economic development strategy. Yet … improving education without simultaneously improving job prospects in the local labor market is likely to have limited impact.”

Rural residents know this to be all too true. Young people who leave for college are far less likely to move back into their rural communities after finishing their education—sometimes because their new skills aren’t usable in their hometowns, rural jobs don’t pay as well as urban jobs, or they have just been won over by the experience of the big city.

“The sad thing is that most college graduates don’t come back to their home towns,” Seefeldt said. “Part of it is the lack of opportunity, and part of it is probably the lack of excitement for them.”

Kirsten Berntson is one example of students who turn that perspective on its head, and she’s a sign that attitudes may be changing. Berntson is a 2012 graduate of Kulm High School and a second year student in Wahpeton, N.D., working on a three-year degree in business and culinary arts.

Would she ever consider returning to Kulm to run a local café?

“I definitely think about it,” Bernston said.

“I’ve always thought about coming back to Kulm after college, but I also always saw myself going to college. So I went after my education, found what I wanted to do, and then, if I come back, I’ll figure out how to put it to work where I am. I never approached it from the perspective of ‘where are the jobs’ or even ‘what are the jobs in Kulm.’”

Bopp believes the increase in telecommuting may also help Berntson’s attitude become more of a trend.

“As more and more jobs can be done from home, we may see more students come back with higher education and be able to put their degrees to work here,” he says.

He also sees students interested in jobs that traditionally required no formal education, such as farm work, now benefiting immensely from a college degree.

“I can think of one of our students in particular who has always planned to take over the family farm,” says Bopp. “Knowing that, he went on to pursue a four-year ag degree, so he could do it right.”

Price says he hopes that students who return will bring back more than a college degree.

“I feel it is critical that every graduate receive some sort of post-secondary training,” Price said. “However, habits of the mind, work ethic, personal attitude, an ability to communicate effectively, and time management skills are as important as the degree that a person earns after graduation from high school.”