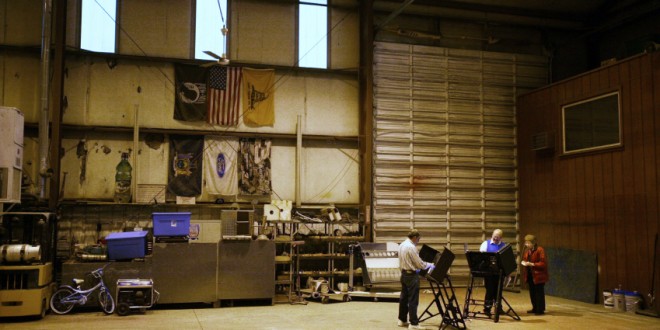 A volunteer helps a voter cast her ballot at one of the two polling machines in a warehouse serving as a polling station on November 4, 2008 in Burgaw, North Carolina. (Photo by Logan Mock-Bunting/Getty Images)

Mitt Romney is running behind in many of the major polls making headlines in the latter part of September, but one demographic is providing good news for the Romney campaign: rural voters in battleground states. 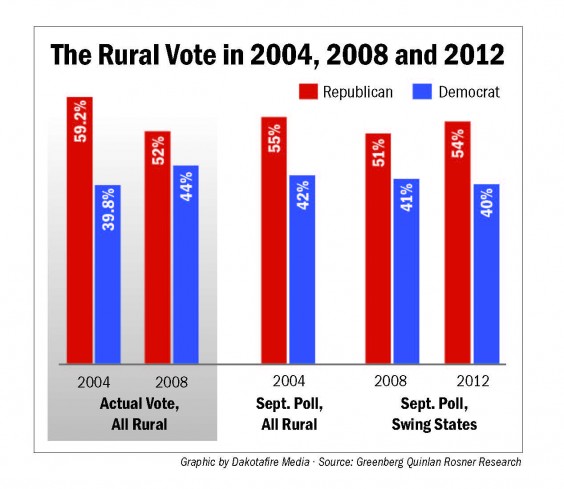 President Obama made inroads among this population in 2008, when 47 percent voted for him—which was still less than the 49.4 percent who voted for Republican John McCain, but was a significant advance from the 39.8 percent that Democrat John Kerry had in 2004. The poll conducted Sept. 15-18 for the National Rural Assembly found that support had eroded: 40 percent of rural voters in swing states said they would vote for Obama, while 54 percent said they would vote for Romney.

The poll was conducted by Greenberg Quinlan Rosner Research, which does polling for Democratic candidates, with input from Glen Bolger of Public Opinion Strategies, which works with Republican candidates and advocacy groups.

According to Bolger, the rural areas of swing states “are not much of a battleground,” Bolger said. “The challenge for the President is just not to get beat too badly in the rural areas…. This presages a very close election, because as well as Obama did in the rural areas in 2008, he’s clearly not replicating that.”

“Rural areas in this country are very tough for President Obama,” said Democratic pollster Anna Greenberg. “It was tough four years ago, and they’re even tougher now. I think that that is obviously important in a very close presidential race because it’s really Mitt Romney’s geographic base.”

The poll, as reported by The Daily Yonder blog, shows Romney’s advantage among the rural demographic goes deep:

The one area where Obama held an advantage was “addressing the needs and concerns of women.”

The poll also showed that these voting preferences are not likely to be swayed by much: Just 4 percent of respondents said they were undecided or considering third-party candidates.

The caveat for Romney, however, is that the percentage of the population that is rural in these battleground states is not a majority. The share of the population that is rural ranges from 39.7 percent in New Hampshire down to just 5.8 percent in Nevada. Romney is going to have to pull in many urban voters as well to get over 50 percent in these states—and while statewide poll results in battleground states have varied, Obama currently seems to have a lead in all but North Carolina and Florida.

The rural part of the population has been decreasing in battleground states right along with the percentage of the rural population nationwide. The national rural population dropped from 24.8 percent to 19.3 percent from 1990 to 2010, according to U.S. Census data.

(The rural population dropped from 47 percent to 40 percent of the total population of North Dakota, and from 50 percent to 43 percent of the population of South Dakota, from 1990 to 2010. That move toward urbanization hasn’t made the Dakotas any less red on electoral maps: According to FiveThirtyEight, a column written by statistician Nate Silver that analyzes electoral probabilities using advanced statistics, as of Sept. 24, Romney’s chances of taking North and South Dakota are 98.8 and 98.4 percent, respectively.)

*FiveThirtyEight (Nate Silver’s Political Calculus) uses statistical modeling to make educated guesses about the outcome of political races. Poll results and the trends in and results of previous elections are part of the equation. The results vary daily, based on available polling. Learn more at http://fivethirtyeight.blogs.nytimes.com/.
Daily Yonder National Rural Assembly Obama Romney rural slider vote 2012-09-24
Heidi Marttila-Losure
Share !
Previous: FiredUp: Should the use of antibiotics in farming operations get more scrutiny?
Next: S.D. ag secretary will speak on rural improvement in Faulkton
Scroll To Top