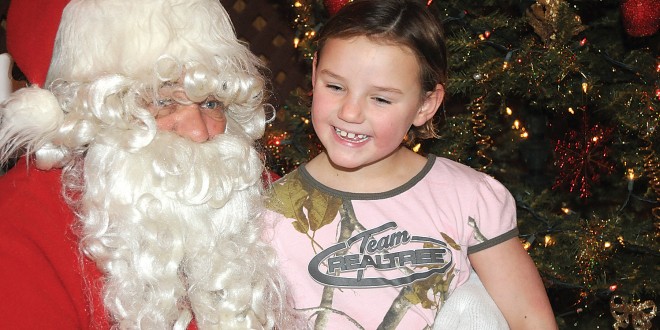 SANTA MADE AN early stop in Bristol on Dec. 1 as the community held their annual stop and shop day. Santa listened to children’s requests for Christmas and handed out treats to the good little boys and girls. Ali Kretzschmar tells Santa what she wants for Christmas. Photo by John Suhr/Reporter & Farmer

Longtime Webster Santa is hanging up his suit

By Webster Reporter and Farmer December 18, 2012

SANTA MADE AN early stop in Bristol on Dec. 1 as the community held their annual stop and shop day. Santa listened to children’s requests for Christmas and handed out treats to the good little boys and girls. Ali Kretzschmar tells Santa what she wants for Christmas. Photo by John Suhr

This year is Larry aka “Santa Claus” Baumgarn’s last Christmas in his jolly red attire. The longtime Webster insurance agent and Santa will hang up his suit after close to 30 years making holiday visits that have meant so much to so many.

“It all started years ago in Wallace when they needed a Santa Claus to ride on the fire truck, and my body was the perfect fit for the suit. I had just moved back from Minneapolis,” Larry related from his insurance agency office a few weeks ago. “I used to help my older brother Earl with his Santa routes. I don’t remember how old I was then, but I needed a pillow to fill out the suit. For the last 20 years or so a pillow hasn’t been needed.”

Baumgarn built up quite a clientele making stops at businesses, churches, nursing homes, youth groups and families from Watertown to Aberdeen. 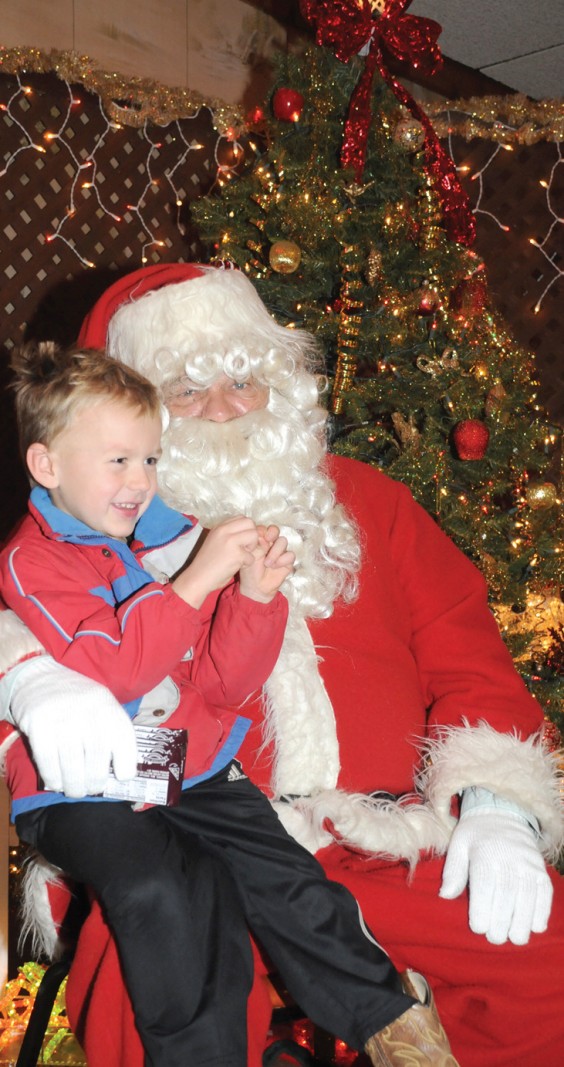 SANTA MADE AN early stop in Bristol on Dec. 1 as the community held their annual stop and shop day. Santa listened to children’s requests for Christmas and handed out treats to the good little boys and girls. Henry Witt tells Santa what she wants for Christmas. Photo by John Suhr/Reporter & Farmer

“I have literally worn out two suits and countless wigs and beards,” he said. “My current suit was handmade by my mother. She bought Dacotah Polar Fleece and some fake fur, took my measurements and in three days had it done. It was absolutely perfect.”

With a new suit Larry was compelled to update the hair and beard and found a store in Aberdeen who sold him a pricey new facial disguise made of  human hair.

Baumgarn says Christmas Eve and Day were always the busiest time. “My route usually started around 5 or 6 p.m. and often I wouldn’t get home until 10-10:30,” he said. “A typical stop at a house was scheduled every 15-20 minutes. A lot of  homes were visited by good old St. Nick.”

If  he ran ahead of  schedule Baumgarn would often make some unscheduled stops which he admits got interesting. “If  I started running ahead of schedule I’d just find a house with a lot of  cars and lights and pop in,” he admitted. “They would all be asking each other who is he?”

“Duh, the red suit and beard should have told it was Santa. A lot of  parents would think grandma and grandpa had me stop and the grandma and grandpa thought their kids had me stop,” he continued. “Sometimes if  the gifts were already handed out I’d just ask if  they (kids) got everything they ordered. Then let them know the next time they should leave me a note telling me they went to grandma and grandpa’s. Parents usually got in trouble for that.”

Baumgarn admits dealing with kids is one of  the rewards to this job.  Mrs. Claus, aka Kristi (Larry’s wife), runs Little Rascals DayCare. One year some of  the kids who had seen Santa the Saturday before at the movie theater got wind it was Larry. So Larry turned the tables on them and got friend Jim Kading to wear the suit to the day care center visit while he hid in the kitchen waiting to spring his surprise.  When the kids started claiming Santa was really Larry, in walked Baumgarn to greet Santa.

“They sure scattered once they all knew there he was – the real Santa.”

Larry is grateful fellow insurance agent Tim Breske has helped out in this caper after Kading died.

“There are always some kids who want to believe in Santa but aren’t quite sure,” Larry continued. “Kalissa Pereboom (now a sophomore) was one of  them.” When she was four or five years old parents Jay and Janice filled Larry in on Kalissa’s skepticism.

Larry had the perfect solution: Have the kid call Santa’s cell phone at the North Pole. “Thanks to caller ID I knew when she called,” Larry chuckled. “I answered ‘North Pole, Santa speaking. What can I do for you?’”

A not-so-skeptical Kalissa told Santa what she wanted for Christmas. But Santa, using a few tips from the youngster’s parents, told her there wouldn’t be any presents coming if  she didn’t clean up her room. Larry reinforced his good behavior spiel by pointing out he especially wanted a blue shirt now lying on her bedroom floor to be put away by the time he arrived on Christmas Eve. “I think she became a believer real fast,” Larry said.

Little kids aren’t the only ones to experience this local Santa’s visits. “A local floral shop owner told some gals at the bank that once when he was young he wanted a train set. Santa came and he got a dump truck. A cousin got the train. Bob (Dosch) thought Santa made a mistake,” Larry said.  “The bank gals got together and bought a train set and I got a call about Santa to deliver it.”

Larry said he caught up with Dosch on Christmas Eve as he parked in the garage. “I walked up and scared Bob stiff, I think. Santa informed him that since he was upset about not getting his train that he shouldn’t have quit writing to me. That’s why he never got one. But after 45 years of  carrying this package from the North Pole, I finally found you. Of  course Bob wanted to know who I was…The guy in the red suit should have given it away.  It took Bob about two weeks to figure out who bought the train and he coerced the girls into tattling on who Santa was… Gotcha’ Bob.”

Larry has made the rounds in almost every type of  vehicle imaginable. “I’ve gone out in just about an form of  transportation—snowmobiles, ATVs, Humvees, tractors, even a horse,” he said. Larry has even delivered racy green and gold women’s undergarments to an avid Green Packer fan.

But trip to a rural Waubay family, who were down out their luck, is one of  his most memorable visits. “Sergeant John Mahlen found a Day County name on a needs Christmas tree at the Watertown Mall and the local guard felt they should help,” Larry said.

The parents weren’t unable to get the kids to see Santa as dad was ill and mom was down for bed rest after a tough birth.  Mahlen asked fellow guardsmen if  they knew of anyone who could be Santa. Two of  Larry’s boys, Matt and Casey, volunteered his help and after filling a Humvee with duffle bags of presents, new clothes and food, the guardsmen made the trip to the family’s home on the Saturday before Christmas.

“The boys had on their dress uniforms, and we arrived in a brand new Humvee. It was pretty impressive,” Larry explained. “I remember it was about 9 a.m. and the kids had just finished breakfast and were still in their PJs.  The 8-year-old girl opened a new dress in just her size and some Barbie dolls. The 4- or 5-year-old boy found a John Deere toy combine and tractor and all kinds of  equipment to go with it in his duffle. The baby got new diapers, sleepers and formula.

“The two older kids, after opening their first gift, said that was all they needed when informed that the entire contents of  the bag was for each of  them.  The girl asked if  I could just make dad better, that was all she wanted for Christmas. I wished I had the power to do that. The boy wondered where my reindeer were. I had to inform him that Rudolph had gotten sick and he was at the local veterinarian getting better. The hug I got from the mom telling I’d made their Christmas, but their reaction also made mine.”

Last year Baumgarn told his regulars it would be his last visit although he agreed to several community visits this season.

“My family has put up with me missing Christmas meals with my in-laws for way too long,” he said. “Now with grandkids, Mrs. Claus and I decided it was time before it was too late and I missed all of  the family fun.”

“I have so many memories, too many to mention, but they were all special to me to have been able to share the joy of  Christmas as Old Saint Nick with friends and family,” Larry concluded. “I’d like to give a special thanks to a very understanding Mrs. Claus for letting me take the time to do this. Merry Christmas to all and be merry all year long.”