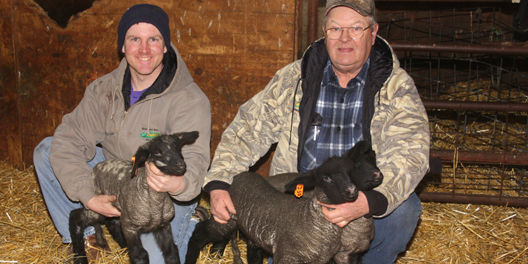 Spring scene: Lambing and calving is ‘most fun part of the year’ for Clark breeder

Dusty Fuller and his uncle Wayne Fuller are shown with three Hampshire lambs born around the middle of February on Dusty’s farm southeast of Clark along U.S. Highway 25. Dusty is the third generation farming on the farm his grandparents, Leonard and Pearl Fuller, moved to in 1941.

“I don’t know if it was the dry weather last year or what, but in talking to other breeders at the farm show this year, we’ve all noticed a lot more single births this year with our herds. We usually have about 50 percent of our births being twins, but this year only about one third of them are twin births,” stated Wayne Fuller of Clark.

A sheep’s gestation is five months, so the rams are usually put out with the ewes starting in September. The first of February was when lambing started on the Fuller farm. There are usually about 15-20 ewes on the homestead farm where Fuller’s nephew, Dusty Fuller, resides.

After the lambs are born, they spend two days in a pen with just their mother. Then they are moved to a little bigger pen with just a few other ewes and their lambs. One week’s time finds the lambs in one pen and the mothers in another.

“They will gain about a pound a day,” Fuller said. “We’ll keep back a few for replacement ewes, but the rest will go to market, or the bucks will be sold for breeding stock. We used to have about 100 ewes but have cut it down over the years to about 15, which were my kids and Terry’s kids’ 4-H projects.”

Dusty Fuller is one of the kids whose 4-H projects are now the breeding stock.

Registered Hampshire sheep under the name “Fuller Brothers” goes back to the 1950’s when the sons of Leonard and Pearl Fuller started in sheep.

“My parents were very instrumental in why we are farming today, I believe,” Fuller noted. “We were in 4-H and FFA and started taking care of our own sheep and registering them under Fuller Brothers when my older brother Dick was in high school. Dad gave us a real good deal. He provided the feed and we did all the work and got the profits. In turn, I did that for my own kids,” Fuller continued.

He and wife Linda (Maynard) have two children, Justin and Laura, and are expecting their first grandchildren this spring.

The Fuller Brothers, Wayne, Terry, Dick, Lee and Bill, all live within four miles of the farm they grew up on and farm close by one another. Wayne, Dick and Terry continue to farm together under the Fuller Brothers name. They have one sister, Laraine.

Fuller’s history with sheep goes back to when he was 10 years old and showed his first sheep. He’s continued to show sheep at the South Dakota State Fair going on 57 years. He only missed one year while serving in the U.S. Army.

Over the years, the Fuller Brothers have shown their sheep in Chicago, Kansas City, Sedalia, Mo., Crookston, Minn. and even Salt Lake City, to name a few. More recently, it’s mainly the South Dakota State Fair and the Watertown Winter Farm Show for Wayne Fuller.

One year the Winter Farm Show was dedicated to the Fuller Brothers for being the longest and continuous exhibitors at the farm show.

Fuller has also helped organize the SD Hampshire Association, and he and his brothers have served as president and director on the board. While serving on the National Hampshire Sheep director board, Fuller’s main goal was to figure out ways to get more young people involved in sheep showing.

Hampshires are the breed his father Leonard first purchased in 1949 from Jim Coleman at Garden City. From there, the Hampshire herd started and continued with the elder Fuller supporting his sons, physically and financially, over their young years getting into the sheep business.

Herefords are also a family business as is grain farming.

Dusty Fuller also has Herefords on the farm now, and the end of January was surprised with a new calf.  “The rest of the calves will be born after April first. This heifer has had pretty nice living so far in the warm barn,” D. Fuller said.

“This is the most fun part of the year—coming out to the barn and seeing new lambs and calves arrive and then watching them grow,” W. Fuller said.