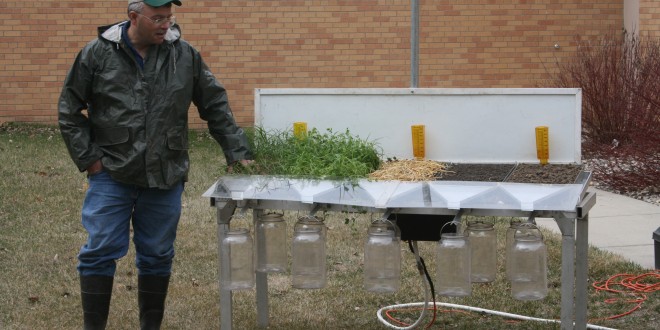 Jeff Hemenway, soil quality specialist for the NRCS, explains how the rain simulator works at an event in Brookings in April 2012. Photo by Heidi Marttila-Losure

The closer land is to a grassland system, the happier producers are to see rain

Is the abundance of rain the Dakotas have seen in the past few weeks a blessing or too much of a good thing?

The answer to that question probably depends on where live—but how you farm also matters, area scientists say.

What kind of soil makes a better sponge? 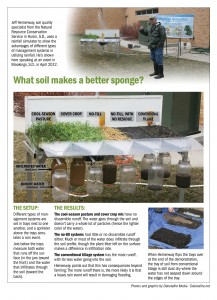 See this infographic of the rain simulator demonstration. (Click on image for a larger version.)

“How much moisture received and whether it brought damage or relief to agriculture producers really depended on which South Dakota county their land is in,” according to Laura Edwards, SDSU Extension climate field specialist. “Some farmers will need to replant, others have to wait to plant while their field sits several inches under water, and at the same time many ranchers couldn’t be happier because now forage and range conditions are looking better than they have in a long time.”

Some in southeast South Dakota would have reason to grumble about getting too much at once. Some areas of Turner, Lincoln and Minnehaha counties received 10 inches from a single storm system May 25-26.

“I believe the spring rain has affected some growers into delayed planting,” said Terry Schultz, president of Mustang Seeds. “Eroded soil can be a problem in some places. In some areas, it’s bad enough that they might have to end up replanting.”

Schultz said that the area that his company covers—the Dakotas, Iowa and Minnesota—has all received amounts that are considered excessive.

In Dakotafire counties, people are taking care not to complain, considering that drought was still a significant worry even a month ago, and could still be a problem later in the season.

“It’s been a great week,” said farmer Rex Young of Orient, in Faulk County, on May 27. “We got 1.05 inches of rain over the weekend, and since last Wednesday we’ve had 1.30. … I did seem some guys trying to get some crops in the field, still plugging away at it, but in the low spots it’s too wet to plant. We’ve got time, though. And we sure can’t complain about the rain.”

Kelly Stevens of Miranda said much the same. “I’ve heard some guys saying we’re getting too much rain, but I’m not complaining one bit,” Stevens said. “I said to them, ‘Remember, this is South Dakota. The weather can change 180 degrees with high winds to bake us dry real quick.’ We’ll take as much of this water as we can get right now.”

The rain has continued to fall since then, and now, for some farmers, the ticking clock of insurability dates is likely pounding as loudly in their heads as the rain is pounding on the roof. The last date for full insurability of soybeans in much of the area is June 10.

Jeff Hemenway, soil quality specialist for the Natural Resources Conservation Service in Huron, S.D., says that from conversations he’s had with climatologists and other scientists, he thinks the weather that led to this spring’s stressful situation is likely to become the norm going forward.

“The window for planting is getting shorter,” he said.

This would result in part from winter weather happening unpredictably into the spring. Rain events are also more likely to be intense.

“That creates more of a problem, because to utilize it, the soil would have to infiltrate that rain more quickly,” Hemenway said.

Hemenway said some ways of farming that have worked until now are not going to work so well in these changing conditions. “We need to put together management systems that can tolerate (intense rain events),” he said. “Our weather has changed.”

So what kind of management system manages rain the best? Hemenway has been traveling through South Dakota giving a demonstration with a rainfall simulator to answer that question.

He’s measured many different types of management systems, and one rule holds: Grasslands make the best use of water.

This is perhaps why ranchers have more reason to smile when the rain comes: Too much rain can cause some problems of mud and compaction when moving cattle, which can be a concern—“but they know it’s going to grow some grass for them,” Hemenway said.

Recent rains have significantly improved pasture and range conditions, according to Darrell Mark of SDSU Extension: As of June 3, the percentage of rangeland rated good or excellent went from 14 percent to 30 percent since May 26. It’s still not as good as it was last year at this time, and it’s not as good as the five-year average—but it’s headed in the right direction.

For those farmers that are not growing grass, there’s a second rule: The closer they can get to mimicking a grassland situation, the better off they are going to be.

That means, in part, doing as little tillage as possible—which goes against conventional wisdom of previous generations.

“In the past, we’ve been taught that tillage is something we need to do to increase intake and infiltration of water. And that’s just completely opposite of what really is the fact,” Hemenway said.

The rainfall simulator shows this clearly: At the end of a simulated 2-inch rainfall, the runoff containers for the grassland areas are nearly empty—but the container measuring runoff from the conventionally tilled field is nearly full with black water.

In between those two extremes are the fields where no-till is practiced. The residue on the top of the soil helps keep the rain from disturbing the surface, which helps prevent soil crusts, and the fact that the soil structure has not been disturbed with tillage means the wormholes and other passageways through the soil are still intact, helping the water to infiltrate more deeply into the soil profile. The demonstration generally shows no-till management has runoff rates more comparable to the grassland areas than to the conventionally tilled soil.

Getting into the field sooner

Farmers looking at the looming insurance planting deadlines on the calendar might be tempted to get into the field when it’s really too wet to do so. Hemenway cautions against that.

“Under wet conditions, people are creating a lot of compaction issues,” he said. “It’s eventually very detrimental to future cropping, and it can be hard to alleviate in just one year. Sometimes it takes three or four years.”

Most farmers seem to know that “mudding in” corn just doesn’t work, but they might try it with other crops—“but you better pray it continues to rain, because if it dries up, it can lead to really compacted conditions,” Hemenway said.

Hemenway said no-till management also offers a benefit when trying to get crops in the ground in the spring: Because the no-till soil absorbs the water much more quickly, it also is “trafficable” more quickly—so they have to wait less for the field to dry out enough to plant. In contrast, heavy rain can leave a tilled field “a mucky mess” because the water takes so much longer to infiltrate.

Hemenway said last year he did an experiment with two adjoining fields: He poured water on a no-till field, and the water was absorbed in 45 seconds. On the adjoining field, absorbing the same amount of water took 18 minutes.

That can be a difference measured in days, depending on the rain event, he said.

David Christenson, crop insurance agent with Simon Insurance and Auction Service in Britton, said we’re still behind in terms of planting, but that farmers can get a lot of acres planted in a day—in part because of increased use of no-till.

“Not too many years ago, you could work from 6 a.m. to dusk and get 120-125 acres planted,” Christensen said. “Today you can plant 200-250 acres a day in less time because of bigger equipment and today’s farming practices—no-till requires less fuel and a lot less manpower.”

Thinking about the whole-farm system

The way land absorbs rainfall is just one factor in the farming system, but adjusting farming to work well in this one area can mean benefits in other ways, Hemenway said.

For example, if farmers think of planting more than just corn and soybeans—winter wheat or alfalfa, for example—then not all of the planting needs to be done in the spring. Having a smaller window for spring planting would not be as much of a factor.

Losing diversity in the farm operation is also something to think about when breaking up grassland for cropping, which is happening all over the Dakotas. Keeping some land in pasture for livestock would mean that for at least that part of the operation, almost any amount of rain is good news.

More diverse farming systems would also keep the workload spread out over the year.

Hemenway said he and other ag advisers are trying to get producers to think of all these factors when making farming decisions. “It all fits together,” he said.