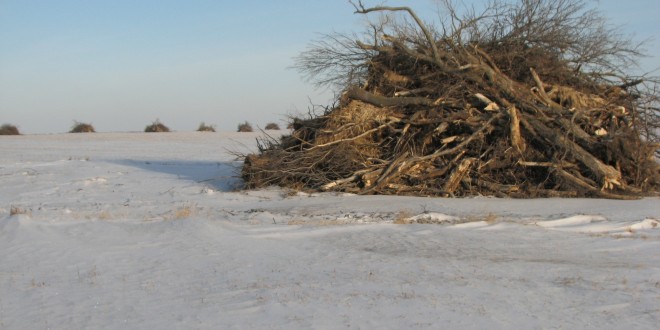 Trees removed from a windbreak in LaMoure County are piled up to dry. The wood will likely be burned later. Aging shelterbelts and windbreaks are being removed all over the eastern Dakotas. Photo by the LaMoure Chronicle

Shelterbelts, one of the great soil conservation measures of the 1930s, are being removed

About 75 years ago, farmers from Texas to North Dakota were at work on a significant project: planting trees to stop the prairie wind from carrying off their topsoil.

Excerpt from Paul H. Roberts’ introduction to “Trees, Plains and People: A History of Tree Planting in the Plains States” by William Henry Droze, 1977:

“The Prairie States Forestry Project is the official name of the tree-planting work conducted by the Forest Service, United States Department of Agriculture, in the Great Plains during the great drought and depression of the 1930s. … The Project was better known though to the public simply as “The Shelterbelt” …

“The idea of a tree-planting project in the Great Plains Region, at the time, originated with Franklin D. Roosevelt when he was a candidate for President. … The Shelterbelt Project, soon after the work was inaugurated, became a veritable crusade by Project personnel. … No forestry project was ever closer to the hearts of those who were dedicated to its conduct, or to the farmers and others whom it directly benefited.

“To Project personnel the task presented a great and immediate technical challenge due to the prevailing drastic drought; and there was an added zeal because the initial direct benefits of the belts to the farmers became apparent as soon as trees became high enough within a year or two after planting to break the wind. To the farmers and business people dependent on the farming industry who had watched crop after crop wither in searing heat and disappear in blinding ‘Black Blizzards’ of dust, the thrifty belts, often the only green things in a countryside, brought a renewed faith in the land and hope for the future.”

Those farmers had watched, helpless, as the dust storms of the 1930s gave dramatic evidence to the damage that 50 years of short-sighted farming practices had wrought. President Franklin Roosevelt is credited with putting forward the plan to plant shelterbelts all along the drought-stricken Great Plains to slow down the wind. Some criticized the plan to plant trees in the “Great American Desert,” but others—especially as the first successes were reported—took to it with the zeal of a crusade.

“No forestry project was ever closer to the hearts of those who were dedicated to its conduct, or to the farmers and others whom it directly benefited,” writes Paul H. Roberts, former director of the Prairie States Forestry Project, in the 1977 book “Trees, Prairies and People” by Wilmon Henry Droze.

In recent years, and especially last fall when an early harvest left farmers time to work on side projects, many of those trees so eagerly planted in the 1930s are being uprooted. No one keeps track of exactly how many shelterbelts or windbreaks have been removed, but several Natural Resource Conservation Service employees said they would guess significantly more are being taken out than planted.

“Almost every time there is a sale or land auction, one of the first things they do seems to be to clear that land in the name of efficiency,” said Grady Heitmann, district conservationist for Faulk County, S.D.

Even though many of those shelterbelt projects were financed in large part with government funding, those trees aren’t accounted for once the farmer or landowner is no longer in the program. After the shelterbelts have been established, they are completely the landowners’ property, Heitmann explained.

Farmers say they don’t need these shelterbelts anymore for wind erosion, but many NRCS employees caution that shelterbelts still have important roles to play on the Dakota landscape.

Many of the trees planted in the Dakotas in the 1930s were what people here call Chinese elm but what is actually Siberian elm (Ulmus pumila), a fast-growing but somewhat short-lived tree. This means, as the years and various storms have taken their toll, farmers and landowners must decide: Do they maintain or replant an ailing or dying shelterbelt, or just remove it?

From a farmer’s perspective, there are many reasons to take out a shelterbelt or windbreak, and not nearly as many to maintain them or plant new ones.

One reason is that with modern no-till farming practices, the need for erosion control from tree rows is significantly reduced.

“At the time they (windbreaks) were put in, the technology wasn’t there, the equipment wasn’t there” to do no-till, explained one Dickey County, N.D., farmer who asked that his name not be used. “(Field windbreaks) had a purpose then.”

Today, the farmer said, managing wind erosion using various farming techniques is entirely possible—though that doesn’t mean it always happens. The farmer said he’s been concerned looking around the county at all the black soil as farmers till their fields to deal with cold, wet ground.

Heitmann said a look around the county last spring showed that additional wind erosion control is still needed. “Even with no-till farming being a long accepted practice, there was still plenty of dirt being blown around all spring and summer,” he said.

“All you have to do is look at the snow in the road ditches and see how dirty it is to notice that there is still a lot of wind erosion happening,” Hirschkorn said.

Another reason farmers have wanted to take out windbreaks is to make it easier to turn equipment. In the wet years two and three years ago, when sloughs took over parts of fields, tree rows made it harder to navigate tractors and combines—especially since equipment is all larger than it was years ago. The Dickey County farmer said he had removed several windbreaks for this reason—not only because it was difficult to navigate around where they were planted, but because dying trees and branches frequently flopped into crop ground.

But in recent years the most persuasive argument for removing tree rows is the little bit of land underneath that could be growing $7 corn or $15 soybeans.

“It’s hard to leave a tree belt sit there, when land, like in Brown County, sells for $13,000 an acre,” the Dickey County farmer said.

Several NRCS employees said there are nevertheless good reasons to maintain shelterbelts or plant new ones.

“Our biggest planting reason now is for farmstead and livestock protection,” explained Wanda Franzen, Marshall County Conservation district manager. Trees around farmsteads can reduce energy bills by blunting the cooling force of the winter wind or providing shade from the summer sun, and trees in pasture areas can do the same for livestock.

Tree rows can provide living snow fences if they are planted in strategic locations, which can reduce the amount of snow removal required to clear roads and driveways.

Trees have been used to reduce odor from livestock production facilities. In recent years, trees have also been planted along creeks or streams to help filter water.

Trees can also provide an important refuge for wildlife. Two years ago, with the snow was very deep, wildlife suffered when their grass and food plots were buried, Erickson explained.

“Deer and pheasant loss was high,” Erickson said. “Shelterbelts or thick tree plantings are their main source of shelter and even a good food source. Wildlife needs habitat, and tree belts are the best winter habitats.”

The Dickey County farmer said he has done some tree plantings on his land to support wildlife, which he hopes his children and grandchildren will be able to enjoy.

It does, however, depend somewhat on what type of wildlife a person wants to support: “Numerous wildlife studies have shown the native wildlife species prefer open grassed areas over wooded areas,” explained Hirschkorn, “which makes sense, as that is the way most North Dakota species started.”

But high crop prices are putting pressure on grassed areas as well, since more money can be made from cropping land than leaving it as pasture. Shelterbelts can therefore provide even native species a place to nest or den up undisturbed.

Still, for some farmers, the return on the investment of removing shelterbelts is high enough that they are willing to do that work, even if they lose the benefits listed above.

Heitmann cautions farmers to make sure they are thinking about long-term effects as well as short-term benefits.

“It does bother me when shelterbelts in our records, planted by the taxpayer, are cleared away, and those thousands of dollars that were spent are simply gone,” Heitmann said. “But I don’t put the blame on the individual making a business decision. They’re trying to make a buck, trying to make a living. … I want them to make money—but I don’t want them to make that money just for one or two harvests, but for as long as they are in business.”

If farmers or landowners do decide they want to add tree plantings on their property, several government programs are available and could foot the lion’s share of the bill—though they are in limbo until the next farm bill is decided.

The No. 1 program for shelterbelts right now is the Continuous CRP program, Franzen explained. Trees must be planted on land that has a cropping history, but the cost share for planting and fabric is 90 percent, and producers receive a land payment on those acres for 15 years.

Another option is including tree planting as part of a plan through the Environmental Quality Incentive Program, in which the farm is rated on its conservation practices, and some parts of those practices could receive 75 percent funding. EQIP does not have an annual payment, however.

Heitmann said he would recommend planting trees as an important part of keeping agriculture viable for the future, and also to preserve wildlife and hunting traditions in South Dakota that depend on shelterbelts deeply.