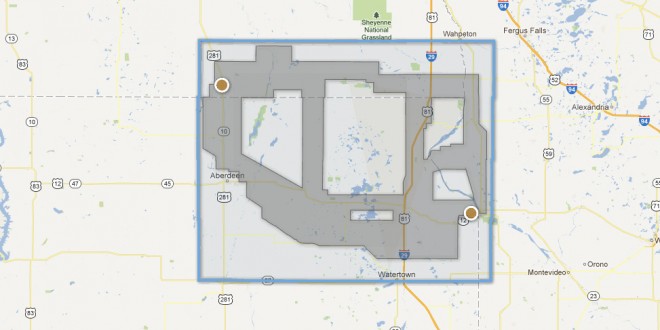 Areas that are being studied for a potential transmission line are indicated in gray. The map is searchable, so addresses can be looked up, at this link: http://www.bssetransmissionline.com/maps/

Sending wind energy back east is one reason for proposed transmission line through northeastern S.D.

Areas that are being studied for a potential transmission line are indicated in gray. The map is searchable, so addresses can be looked up, here.

Utility companies are studying and taking comments on routes for a proposed transmission line that would run about 150 to 175 miles between proposed substations in Big Stone City, S.D., and Ellendale, N.D.

Are you a landowner wondering about the effect of a transmission line crossing your land? This report from the Public Service Commission of Wisconsin discusses some of the potential effects of transmission lines, and some ideas on how to mitigate possible problems.

As part of that study process, four community meetings have been held in the potential area, including one at the Community Building in Britton on Oct. 18. About 25 area residents attended.

Montana-Dakota Utilities Company and Otter Tail Power Company will jointly manage the permitting, construction and operation of the Big Stone South to Ellendale (BSSE) Transmission Line. The project is anticipated to cost approximately $300 million to $340 million and be in service by 2019.

Currently the companies are studying four different routes for the line.  One of those routes would go north through the Britton area along Highway 27.  The other three would be in western Minnesota, Roberts County east of Sisseton, and the western edge of Brown County.

Criteria being evaluated to determine the route include existing rights-of-way, populated areas, high densities of natural features, river crossing locations, public and private airports, and length of the line.

“We want to design the line to best minimize impacts,” said Montana-Dakota Utilities environmental scientist Chad Miller.  “At this point we don’t have a preference on which route we will use.

“Transmission infrastructure hasn’t changed since the 1970s, and this 345 KV line, along with the other 16 projects, will help ease some of the pressure of transmission,” added Miller.  “It could also potentially be part of a system that would allow us to transmit wind-generated power to Midwest areas like Chicago, Iowa, and Indiana.”

Many of the meeting attendees were local landowners with questions on where the line would be located and what would be required of landowners if the line went over their land.

The project is one of 17 transmission projects approved by the Midwest Independent Transmission System Operator (MISO) to improve the capacity and reliability of the regional transmission system.  It would also have the capability of transmitting wind-generated electricity.

Plans are to make a route determination by next year with construction to begin in 2015-16.

Information on the line may be found at www.BSSEtransmissionline.com or by calling 1-888-283-4678. Comments may be submitted on the website. 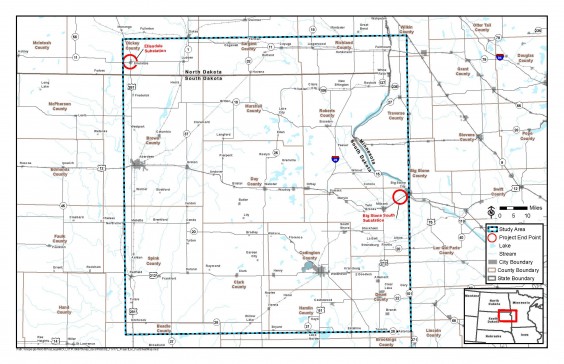 This map indicates the area being studied for a potential transmission line from Big Stone City, S.D., to Ellendale, N.D. Click on the image to go to a larger version.