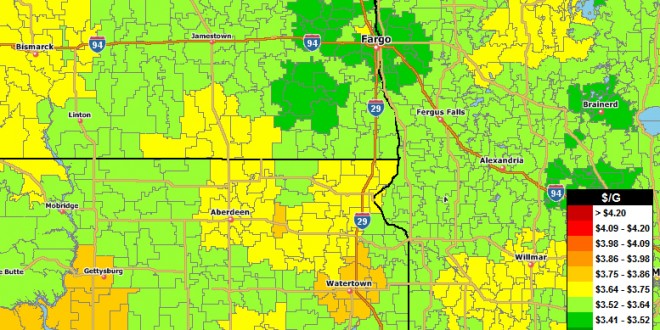 The answer to that question is not as intuitive as you might think.

According to a recent report on MSNBC (via The Rural Blog), right now the Midwest is experiencing what amounts to a discount at the pump because much of the oil produced here (namely, in western North Dakota) can’t be shipped out because of the lack of a pipeline. That glut of product keeps prices lower in the Midwest than they would be otherwise.

Dan Yergin, chairman of Cambridge Energy Research Associates, explained that prices are rising everywhere because of increasing sanctions on Iran, but they are not rising everywhere in the United States equally:

“We lack infrastructure to catch up with the fact that there’s been this big change in oil production,” said Yergin. “Eight years ago, North Dakota was not the fourth-largest oil producing state in the country. So we need new pipelines, and the lack of those pipelines — the lack of catching up — is reflected in the disparity (in prices).”

So, if the Keystone pipeline is approved, oil produced in Canada as well as in North Dakota will flow toward Houston and enter global markets — which will be great for the companies moving the oil, but it will in effect eliminate the discount enjoyed by the Midwest currently.

But, Keystone or no, the discount is likely to be fleeting anyway — one pipeline that had been flowing north from Houston is planning to reverse the flow in June to help ease the backlog in the Midwest, according to the MSNBC article.

See where the low prices are

Gasbuddy.com has an interactive map of gas prices by ZIP code nationwide. The image at the top of the post is a closeup of prices in the Dakotafire region. Head toward Fargo for a gas discount! Or at least, that’s where the lower prices were as of March 7. You can download a mobile app to keep up on the latest info — check out the full map here.