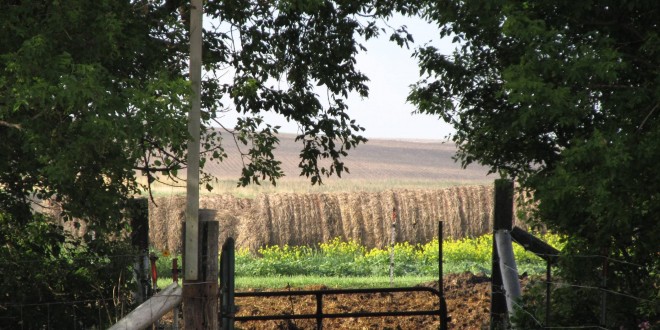 The view from the Johnson Farms farmyard. Photo by Becky Froehlich

Some agriculture groups are saying new crops resistant to herbicides 2,4-D and dicamba could lead to just those sorts of problems.

In January, the U.S. Department of Agriculture released a draft of an environmental impact statement (EIS) that gives the go-ahead to Dow Agri Science to product corn that is resistant to 2,4-D. Comments on the draft EIS are being accepted through Feb. 24.

Advocates of the new technology say the new crops provide a vital weapon in the war against weed resistance to glyphosate, sold under the brand name RoundUp, which is becoming a stubborn and costly problem for farmers across the country.

Unfortunately, stubborn weeds aren’t the only thing that 2,4-D kills, and gardeners, vineyard owners and even farmers of commodities who don’t switch to the new technology could potentially be affected.

RoundUp technology is suffering from its own success. After it was introduced in the mid 1990s, it became so easy to use RoundUp, in combination with RoundUp Ready seeds, that now about 90 percent of soybeans and 70 percent of corn grown in the United States uses the technology.

As fewer other herbicides were used, however, weeds started to develop resistance to RoundUp.

“We’re noticing more and more happening with resistance (in) certain weed varieties,” according to Paul Johnson, agronomy field specialist at the Watertown office of SDSU Extension.

Weed resistance has not been documented as a significant problem in the Dakotas yet. Joe Gustafson, agronomist with Full Circle Ag Co-op in Britton, said that a weed called kochia found around Britton and Aberdeen was believed to be resistant to glyphosate, but testing did not confirm that.

But for farmers in other parts of the country, weed resistance is becoming more than a nuisance. In a statement quoted in a New York Times story, Dow said that 25 states are now affected by glyphosate-resistant weeds, and the number of new acres affected in 2012 increased 50 percent over acres affected in 2011. Without a change in weed management strategies, the weed resistance problems are likely to spread to the Dakotas eventually, if they are not already here.

Which is what made ag scientists search their playbook for new weapons.

Dow’s new 2,4-D-resistant crop is called Enlist. The USDA says that the use of 2,4-D could increase as much as six-fold when Enlist crops are introduced.

The herbicide 2,4-D was first used in the 1940s, and later was included as part of the defoliation chemical used in Vietnam called Agent Orange. Although some critics of these new crops have called 2,4-D the “Agent Orange” herbicide, most studies have determined that 2,4-D was not the part of the Agent Orange formula that later caused severe health problems for Vietnam veterans.

Dicamba has also been around for decades. Neither dicamba nor 2,4-D are considered especially toxic compared to other pesticides. Many Americans have likely used them in lawn care products, for example.

They have two characteristics that may cause problems, however. First, they are really good at killing broadleaf plants—basically, most plants that aren’t trees or grasses. And some of those broadleaf plants, such as tomatoes or grapes, or even commodity crops that don’t have that specific herbicide-resistant technology, we’d prefer not to kill.

Second, both 2,4-D and dicamba have a tendency to be volatile, or to turn to vapor. This vapor can then be carried far from where the herbicide was first applied. 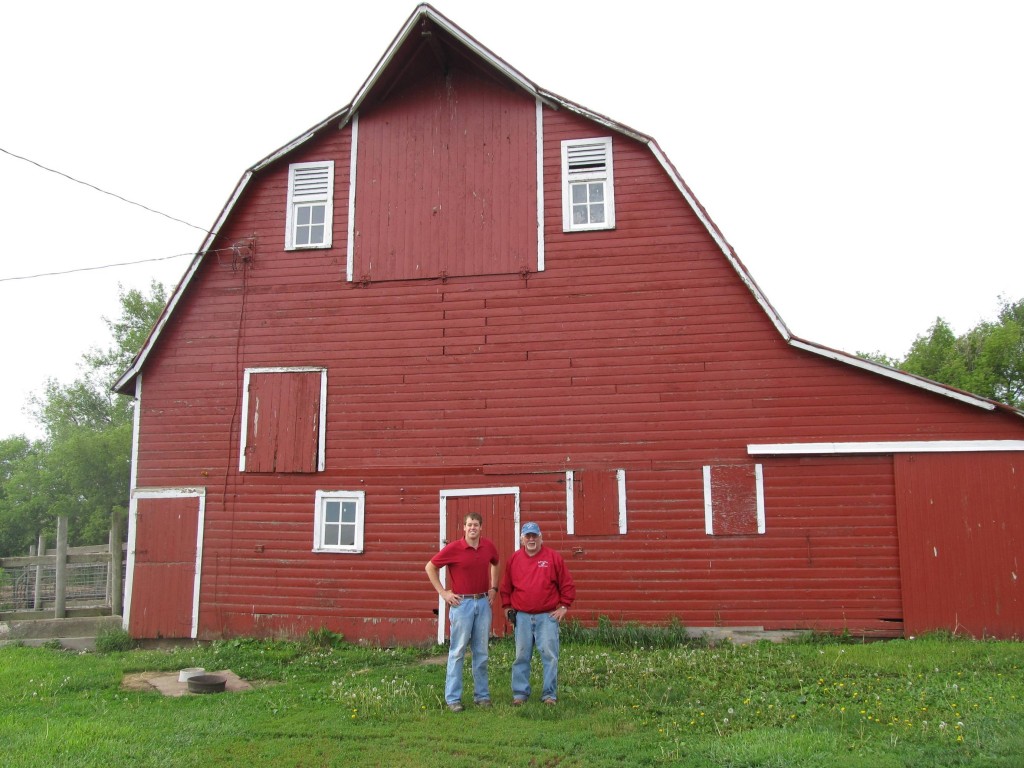 It’s not a theoretical problem, as 2,4-D drift has had a hand in wiping out an entire industry before. In 1919, Iowa was sixth in the nation in grape-growing, producing more than 12 million pounds that year.  The most important factor in killing Iowa’s grape industry was the use of 2,4-D, writes Michael White in a history of Iowa’s viticulture: “By 1954, no vineyard in the state was free of 2,4-D injury.”

Once, a neighbor applied Banvel, which is a trade name for dicamba, on his pasture in the late afternoon. The herbicide was applied in good conditions—no wind to speak of—but it was a dewy evening, Johnson explained, and the herbicide just hung with the mist in a gully overnight.

“The next morning, the wind picked up,” Johnson said. “It blew (the herbicide) more than a mile and a half and totally wiped out my wheat field.”

He’s also been affected twice by RoundUp drifting onto his fields.

In all cases, Johnson was able to settle with the other farmers’ insurance companies. But he says that for him, the problem is not limited to one-time crop loss. To sell his crops as organic, Johnson must go through a certification process that no chemical has been used. In cases of drift, he’s had to make a subfield out of a regular field, add a boundary, and farm it separately. That in itself is a hassle, but Johnson worries about what might happen if herbicide drift happens too often.

“If the certification agency starts to see a pattern that’s not favorable, I could lose certification on not just a couple acres, but the whole farm,” he said. “My livelihood depends on the paper trail I am able to provide.”

Johnson is president of the Northern Plains Sustainable Agriculture Society, which passed a resolution to oppose the new 2,4-D- and dicamba-resistant crops at its annual meeting in January.

Drift may well lead to more lawsuits than when RoundUp Ready technology was introduced, according to Gustafson.

“You’re going to have your drift complaints, and we live in such a litigious society that I think we will be really careful about it this time around,” he said. “The rules back in the ’90s versus the rules now nationwide, as there is more suburban sprawl and things like that, are different.”

Charlie Johnson, however, says lawsuits may not work for those whose crops are damaged.

One special concern for the growers of the NPSAS was the fact that with increased use, it may not be easy to tell whose spray has caused the problem on your field.

“If more than one producer is using it, how specifically do you pin the blame on someone?” Johnson said.

And without that, it may be difficult to get a legal remedy.

“This not just concerning for organic farmers,” Johnson said. Anybody that grows non-GMO crops, or even those that use different GMO crops, could be affected. Gardeners and the Dakotas’ fledgling wine industry could also be affected.

“You’re almost going to have to get on the bandwagon to make sure you aren’t going to be affected,” Charlie Johnson said.

In any case, more proactive conversations between neighbors are going to be necessary, according to Paul Johnson, from SDSU Extension.

Dow scientists recognized the potential drift problem, and they say they have addressed it by developing a new formulation of 2,4-D that’s ultra-low volatility.

After complaints that just offering a new variety wasn’t enough—especially since it would be more expensive than generic 2,4-D, which is relatively cheap—Dow said they would urge farmers to use the new formulation when they purchased the new Enlist seeds. They also said they’d try to price the new formulation competitively. Whether that’s enough to get farmers to use the more expensive product remains to be seen.

Charlie Johnson, who said he depends on a six-year crop rotation (including oats, alfalfa, a winter rye cover crop, corn and soybeans) to be the farm’s best agronomy program, sees herbicide resistance as a signal of a failed technology: After weeds develop resistance to Enlist, scientists will have to come up with something else.

“Haven’t we learned from what RoundUp-resistant weeds have done in 20 short years?” he said. “To depend on a chemical resistant crop to totally flush out weeds year in, year out, for all of eternity isn’t going to work.”

“Our best weed control is to bring more farmers back on the land, and not have technology replacing farmers from ever coming back to the farm,” he said. “If we would enlist more farmers back into agricultural production, we could handle the weed problem with people and not technology. And we could handle it with stewardship and soil health and care rather than using input products.”

Johnson’s way of thinking is not likely to figure into the USDA’s approval process. The USDA has indicated that it will base its approval of Enlist crops on whether the plant itself causes problems in the environment. Because drift problems are not relevant to that question, the crops will likely be approved.

To make comments on the USDA’s draft environmental impact statement, go to this link: http://www.aphis.usda.gov/APHISVirtualMeetings/ (The public meeting has passed, but the USDA is still accepting comments at the link through Feb. 24.)

Note: Through her family’s farm, the writer is a member of the Northern Plains Sustainable Agriculture Society.