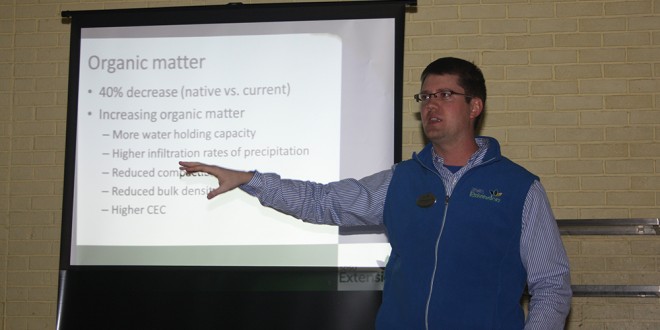 Nathan Mueller of Brookings, the SDSU state agronomist, gave a program on Saturday going over how residue management, crop rotation and hybrid selection can help manage your fields during weather extremes. Photo by Clark County Courier

This past season, SDSU state agronomist Nathan Mueller did not put cows out to graze in his corn field near Hooper, Neb.  He wanted the extra residue left to help with next year’s crop.  “Residue in a dry year helps retain moisture,” stated Mueller, “that’s why it’s good to leave those corn stalks in the field.”

“Given the rainfall we received this year, people were surprised at the results in yields.  That’s because the crops’ roots were using stored soil moisture from previous years.  Next year may be a different story,” stated Mueller.

Having a diverse crop rotation mitigates risk, he went on to say.  The rank of soil water depletion from the previous year is topped by alfalfa, then corn, soybeans and spring wheat.

Corn uses more water at a deeper depth.  After silking there are 38,100 miles of root length in an acre of corn.  A corn root can grow six to eight feet deep.  Alfalfa can grow down to 20 feet deep.  Mueller mentioned on a corn after alfalfa field, this one dried up first.  Corn after soybeans out-performed corn after corn.  Corn after corn the previous year will be your higher risk as you have less water to go with.

On the Aqua Max Hybrids, the root is deeper.  Unfortunately, the new data comes out on the newer hybrids after the deadline for the 15% discount on early sales, so one needs to weigh the benefit-cost ratio.

As the conversation turned to compaction from cattle on the cornfields, Mueller said in a study done in Nebraska, the top three inches were affected, but in the samples taken three to six inches down, they were not affected when cows were on the field.  A tractor compacts more, measuring six to 10 inches down.

“The best time for cattle out in the corn is when the ground is dry or frozen,” continued Mueller.  “April, May and June are our bigger rainfall months, so in the spring more compaction will occur more likely than in the fall with a wetter soil.”

According to a 15-year Nebraska study on grazing, one cow on one acre for one month will take about 20% of residue off of your field.

In a study done on leaving stubble in the field to increase snow capture, the results were 2.36 more on ridge tops, 1.14 more on south slopes and .5 inch more in the valleys.

“Looking at some of these studies may help one make the best decisions in their farming operation,” ended Mueller.