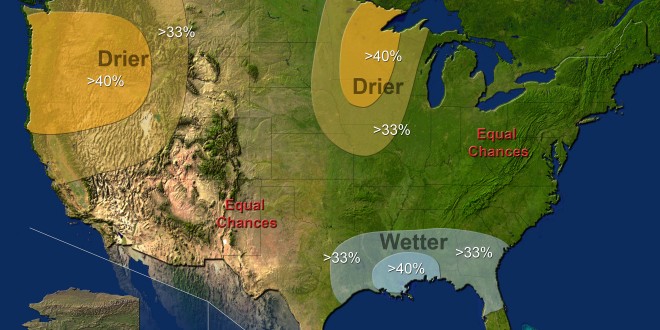 Part of the eastern Dakotas can expect drier conditions this winter, according to the NOAA’s annual Winter Outlook. Image from http://www.noaanews.noaa.gov/stories2012/20121018_winteroutlook.html

Part of the eastern Dakotas can expect drier conditions this winter, according to the  NOAA’s annual Winter Outlook. Image from http://www.noaanews.noaa.gov/stories2012/20121018_winteroutlook.html

The South Dakota Extension sent out this news release today:

Brookings, S.D. — The chance of reducing South Dakota’s nagging drought does not appear likely in the next few months based on the Oct. 18 Climate Prediction Center’s long-range outlook.

“Drought appears to be getting worse rather than better,” said Laura Edwards, SDSU Extension Climate Field Specialist. “We have been hoping for improving our situation this fall, but the state is getting drier instead of wetter.”

Edwards adds that the long-range drought outlook depicts persisting drought into the winter season. This week’s U.S. Seasonal Drought Outlook shows the same forecast for most of the surrounding states of North Dakota, Montana, Wyoming, Nebraska, Iowa and southern Minnesota. 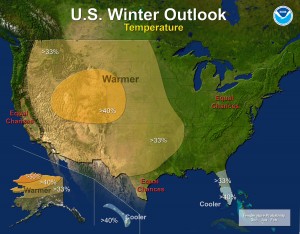 Warmer-than-normal temperatures are expected for much of the western United States, including the Dakotas. Image from http://www.noaanews.noaa.gov/stories2012/20121018_winteroutlook.html

Edwards says according to the outlooks, there is a higher probability of above average temperatures through January.

“This is combined with equal chances of above, below or near normal precipitation for November through January. One exception is the southeastern part of the state, which currently has higher probability of being drier than average through January,” Edwards said.

Because the winter months are generally the driest of the year, Dennis Todey, SDSU State Climatologist says it will be difficult to get much drought relief during the winter months, even in a normal year.

“We may see some short-term drought relief on and off throughout the winter, but folks should be prepared for this drought to carry into the spring,” Todey said.

He adds that last spring’s soil moisture carried the crops in many areas of the state through the first several weeks of drought this year.

“South Dakota farmers won’t have the same soil conditions going into the next planting season.  Winter wheat growers have already been impacted by the dry conditions, as emergence of that crop is currently far below the five year average,” Todey said.

Edwards noted that only 13 percent of winter wheat has emerged so far this year, compared to 80 percent in the five-year average.

A related story on the National Oceanic and Atmospheric Administration website shows that El Niño, which would normally alter weather patterns in the United States, has not yet arrived as expected, which affects climate predictions.