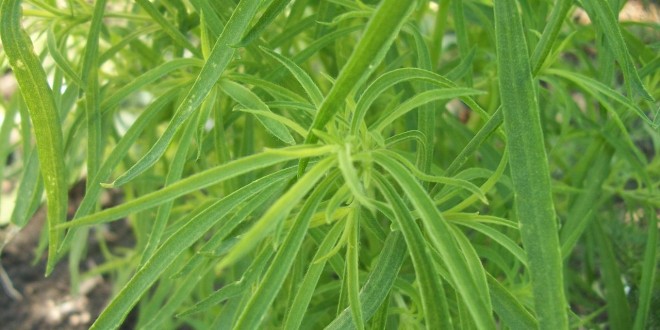 You probably don’t want to—it was not a success. But the plot serves as a helpful analogy: An unbelievable series of disasters overwhelms the planet—such phenomenal crises that a scientist declares that half the country is sure to meet an inevitable death. Through all the disasters, however, the hero (Dennis Quaid) and his family somehow find ways to survive. And the last scene of the movie shows that pockets of people all through the part of the nation declared beyond hope had managed to survive as well. Inevitable death wasn’t so inevitable for everybody.

The scientific description of this is the evolution of resistance. This is the second of two stories to look at how the development of resistance is affecting agricultural decision-making here in the Dakotas, and nationwide. See the first story here.

What happens when a trusty tool that you’ve relied on for years doesn’t work as well as it used to?

One response is to apply more force: If two whacks of a hammer won’t pound the nail, surely 10 will do the job better.

But another response is to consider if something significant has changed. Maybe it’s time to try a new tool—or even a new approach that avoids the job altogether.

Farmers across the country face this kind of a dilemma as they try to address weed pressure in their fields. For years, relatively benign herbicides have killed off the weeds that compete with crops for sun, rain and nutrients. Now, those herbicides are leaving more and more weeds in the fields.

“Herbicide resistance is a very serious problem not only in North Dakota (and South Dakota) but throughout the United States,” says Jeff Stachler, Northern Plains account manager for WillowoodUSA and recently a weed scientist at North Dakota State University and the University of Minnesota.

A recent survey of farmers in 31 states identified that half had weeds resistant to glyphosate, the active ingredient in the herbicide Roundup, in their fields. The survey found that new species of weeds are evolving glyphosate resistance, and resistant weeds are spreading and invading more farms.

Michael Christoffers, associate professor of plant sciences at North Dakota State University, said the problems he sees as a researcher are not yet of disastrous proportions in Dakota farm fields. “But I expect that the problem will certainly continue to increase,” he said.

The problem of resistance

Because for so many years herbicides have done such a phenomenal job of eliminating weeds, farmers have come to rely on them as the only tool for the job—and that reliance on one solution has created the new problem of herbicide resistance. And now, Stachler says, “the herbicide-only approach is beginning to fail.”

Herbicide resistance, like antibiotic resistance in bacteria, is an evolutionary process.

This happens because an herbicide, used year after year, kills thousands of weeds, but by chance, once in a great while, a lucky weed will happen to be genetically resistant to the herbicide and so will not die when sprayed. Because the herbicide has cleared the field of weeds except for the chance survivor, the resistant weeds will seed, spreading their resistant offspring to colonize the field.

Wagner envisions the mechanism of resistance as nature’s way of preserving the biota by discouraging the species of weed from becoming extinct.

How the herbicide works helps to determine how likely it is that resistance will develop: If it kills weeds by targeting only one mode of “action,” or necessary life process in the plant, weeds will be more likely to develop resistance, since fewer genes will need to be different to work around the damage the herbicide does. If an herbicide targets many modes of action, resistance is less likely. 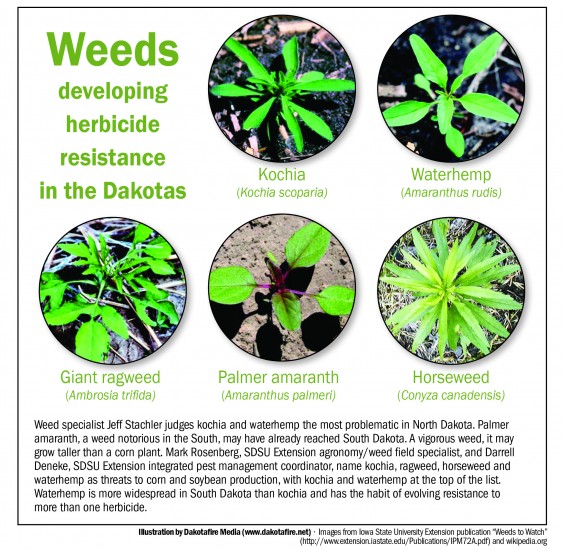 Larry Wagner worries about glyphosate, the active ingredient in the herbicide Roundup, which Monsanto developed and continues to sell. The evolution of weeds resistant to glyphosate is problematic because it is the most widely used herbicide in corn and soybean fields.

The herbicide Roundup works in conjunction with corn and soybeans that Monsanto genetically engineered to be resistant to glyphosate. All the farmer has to do is plant these Roundup Ready crops and spray their fields with Roundup. The glyphosate kills the weeds but does not harm corn and soybeans.

But, as Roundup has become more widely used, the unintended consequence has been the evolution of glyphosate-resistant weeds. The first glyphosate-resistant weed appeared in North Dakota in 1987 and in South Dakota in 1988, according to weedscience.com. Since then at least three and as many as 13 different categories of weeds have developed that resistance in the Dakotas (sources differ on the exact numbers).

Even with the threat of resistance, farmers may not be eager to transition to another strategy.

“Growers, like electricity, use the path of least resistance,” says Richard Zollinger, professor of plant sciences at North Dakota State University. “They use the easiest and cheapest method of weed control, glyphosate. They will use it exclusively until it breaks, and then they continue to use it with little change except to add another herbicide to control the escaped weed.”

But even switching to other herbicides may not help matters, according to Greta Gramig, assistant professor of weed science at North Dakota State University.

Chemical and agricultural companies are keenly aware of the growing problem with their products and are working to develop a new generation of herbicide-resistant crops. Monsanto and Dow are in the forefront of this work, writes Tom Philpott in “Dow and Monsanto Team Up on the Mother of All Herbicide Marketing Plans.” According to Philpott, a journalist and co-founder of a center for sustainable food education in Valle Crucis, N.C., Dow has engineered a new variety of corn that is resistant to 2,4-D, an old but potent herbicide. As with glyphosate the farmer need only plant this new variety of corn and spray the field with 2,4-D to minimize weeds. Dow is eager for USDA approvals, which may come in 2013.

Many of the farmers surveyed about glyphosate resistance in their fields expressed hope that companies like Monsanto would engineer a new generation of corn and soybeans resistant to a wider class of herbicides.

A new way of thinking

Some researchers, however, are saying that the “bigger hammer” approach of using increasingly potent herbicides for weed control won’t work in the long run.

“Farmers have sought to control weeds through herbicides alone, but the attempt is failing,” Stachler said. “Herbicides are the easy button, but weeds aren’t easy to control but rather very complex.”

For historian Mark Hersey, the critique of herbicides goes deeper.

“In the estimation of many, herbicide resistance is indicative of a larger problem … it’s rooted in an instrumentalist worldview that has a great deal of faith, perhaps more faith than it ought to, in technological solutions,” said Hersey, an associate professor at Mississippi State University.

“I’m less sanguine, for instance, about the possibility of tricking nature forever than your average extension agent…in part, I suspect, because I’m a historian and can trace the ways in which one technological solution often breeds a new problem even as it solves an old one. You don’t have to be a Luddite or radical environmentalist to be suspicious of the way in which agriculture is generally practiced. I work at a land-grant university, and I could point you to several scientists who have serious reservations about the way in which scientific research is carried out in the name of agriculture.”

If an escalating arms race against weeds isn’t the best option, what else is there?

Not everyone is ready to jettison herbicides altogether. Wagner recommends the use of more than one herbicide to manage weeds on the grounds that different classes of herbicides kill weeds in different ways.

Cultivating fields more often to reduce weeds is another option, but Wagner admits this has downsides: This approach is difficult to implement on large farms and may cause additional soil erosion and loss of moisture.

Wagner encourages farmers to rotate crops to minimize weeds. He knows that Dakota farmers already rotate corn and soybeans, but he would like to see a third crop added to the mix. Growing only corn and soybeans raises the problem of glyphosate-resistant corn, grown the previous year, germinating in fields of soybeans, where it is an herbicide-resistant weed.

Wagner recommends alfalfa as a third crop, though he knows that it is a tough sell because it doesn’t fetch the same income as soybeans or corn.

Stachler urges farmers to weed by hand (admittedly a big job on a large farm); to scout fields for weeds; and to be sure to eliminate all weeds by tillage or mowing along the edges of fields, where weeds tend to congregate.

“We need a toolbox approach to manage weeds,” Stachler said. “A wrench will not work in every situation. Sometimes you need a hammer.”

Sharon Clay, professor of weed science at South Dakota State University, notes that “if resistant weeds are present, it is very important to know what the weed is and what herbicide it is resistant to. Best Management practices and integrated management techniques should be followed, which include crop rotation, rotation of herbicide sites (or modes) of action, rotation of types of weed control in the rotation (another crop or cover crop, crops with different heights or timing of weed management), and education of the grower to new weeds.”

Clay thinks that scientists might breed crops that tolerate the presence of weeds without losing yield.

Philpott hopes that the problem of herbicide resistance might lead the nation toward a new way of looking at how to farm, in which farmers seek management solutions instead of chemical or technological ones.

“At the risk of sounding overly dramatic, the (2,4-D-resistant corn) seems to me to bring mainstream U.S. agriculture to a crossroads,” Philpott writes. “If Dow’s new corn makes it past the USDA and into farm fields, it will mark the beginning of at least another decade of ramped-up chemical-intensive farming of a few chosen crops (corn, soybeans, cotton), beholden to a handful of large agricultural firms, working in cahoots to sell ever larger quantities of poisons, environment be damned.

“If these and other new herbicide-tolerant crops can somehow be stopped, farming in the U.S. heartland may be pushed toward a model based on biodiversity over monocropping, farmer skill in place of brute chemicals, and healthy food instead of industrial commodities.”

Not everyone agrees that this is the right path forward. But for those growers that do, the challenge will be resisting the urge to push the herbicide “easy button” to try a different path.

What do you think? How should farmers deal with herbicide resistance? Share your ideas at www.dakotafirecafe.com/beyond-the-story-herbicide-resistance