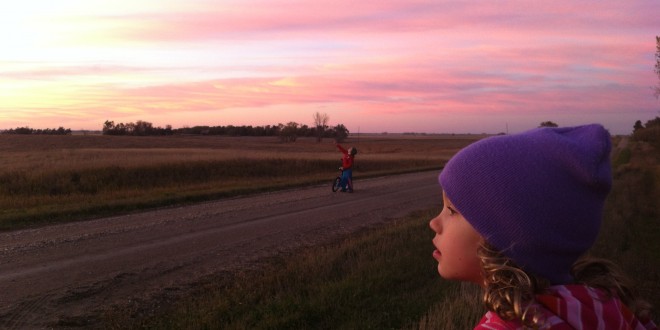 Erik Losure, 5, and Sofia Losure, 7, stop during a bike ride to enjoy the colors of a beautiful Dakota sunset. In less than 10 years, a transmission line is slated to be built in that sunset view. Photo by Heidi Marttila-Losure

FiredUp: My view of the transmission line

I was walking along a gravel road near my home recently, thinking about a phone call I had received the evening before. A representative for a power company had asked if my sister and I had thought more about the proposal he had showed us. I didn’t really know what to tell him.

The Big Stone South to Ellendale transmission line is slated to go across farmland that my sister and I own, near where I was walking. We call that land the river quarter, because the Maple River runs through it, but more because that is what my uncle called it. He and my dad moved their cattle there in the summer, herding them down the same gravel road on which I was now walking. It was his land until he passed away in 2006. The land has been rented by a neighbor since my uncle and my dad, who farmed in partnership, retired some years earlier.

The transmission line will also cross the land of many of our neighbors. I don’t think any of us are really happy about the prospect, though our responses have varied in degree of ire. One neighbor shrugs and says, “You can’t fight progress.” Another gave the power company representative a piece of his mind. No one, however, has come close to the kind of anger that led to protests, destruction of property, and arrests in Minnesota in the late 1970s when a power line was planned. Perhaps everyone learned—those farmers lost anyway.

People around here speak a practical language. They say they don’t want the line because it is difficult to farm around, because stray voltage could be a problem, or because of some other work-related difficulty. But I have heard something else in the pauses between their words. The impractical reasons for not wanting it are there as well. But these guys don’t speak that language, so those reasons aren’t heard.

Many voices I respect on other matters are arguing that this line is progress—a link to our nation’s clean energy future. We need a better transmission grid so the power from renewable energy like the wind turbines on the Forbes Hills can power cities like Minneapolis and Chicago, these voices say.

I don’t know if I completely agree. One way to a clean energy future is through huge wind turbines—but another way (for example) is through the solar panels that people all over the country, including in South Dakota, have installed on their roofs, or the small wind turbines that a number of farmers in the Dakotas have put up. One way requires the resources of one place to serve another; the other way uses the resources available in a place to serve the needs of that place. The shorter the link between a resource and its end user, the fewer the number of things that can go wrong in transit.

Developers starting essentially from scratch in countries where there is little infrastructure now have recognized the benefits of distributed generation and are building systems that do not rely on massive transmission lines. That conversation is happening in the U.S. as well, though it’s a tougher sell here, where our existing system makes considering alternatives harder.

Smaller systems also allow for more local ownership, and in a smaller system, the benefits and the downsides of the system are more likely to be borne by the same people, which can make the downsides easier to bear.

This is clearly not a small system. The benefits of this transmission line are not any more likely to be seen by those landowners who have to deal with them on their land than the average landowner in South Dakota (though not any less likely, either, I suppose). A “more reliable grid” theoretically benefits everyone who uses it, but the downsides of it fall more on some than on others—especially, we’ve learned, on those neighbors who will live near it but don’t own the land where the towers will be, who will have to look at them but will receive no compensation.

The impractical reasons are harder to argue with.

I walk on that gravel road almost daily when the weather is nice, and often even when it isn’t. There are lots of corn and soybean fields along the road, but also CRP land and pasture land where critters of various types roam. I pass several sloughs where great blue herons and ducks of all kinds frequent, with seasonal flocks of geese and pelicans stopping by as well. Four old farmsteads are also on my walking path, and I often consider the lives that were lived on them.

I consider this walk my muse, as I often puzzle out stories as I walk. I take pictures along the way of particularly beautiful moments of evening light.

And as I walk, I look west, right at where that transmission line will be.

Maybe eventually I would get used to it, and my thoughts would not be jarred by the sight of it (though my sunset photos would always be just a little uglier).  But what if I don’t? What’s the going rate for a muse these days? How much should I be compensated for its loss?

My sister and her husband now live 30 miles away, but they had always, in the back of their minds, held on to the idea that if they wanted to move back out to the country, they could build a home out on the river quarter. If or when the transmission line is built, it would loom over the front yard of the house they had dreamed about. How much should they be compensated for the loss of a dream?

Think along the hundreds of miles of the line’s route: How many other dreams, plans and general beauty are going to be affected by the line, and how much are they worth?

That kind of impractical language is not likely to be found in any power company proposal.

In the end, we’ll probably sign it, when there looks to be no other option.

But we’re always going to feel a little bit cheated.