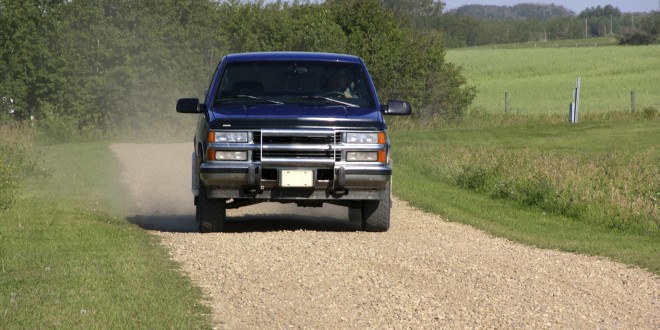 Elizabeth Zappa, a writer and recent college graduate from Northern State University, has this reflection on that common South Dakota driving gesture. No, not that one! That’s far more common on the coasts. No, she writes about the subtle wave from one Dakota driver to another that basically means, “I see you, fellow human.”

People from rural towns always have the impression that people from the big cities are “unfriendly” because we rarely (if ever) wave to strangers as we drive down the highway.

And it’s true. Waving to strangers that you pass on the highway is ridiculous in the cities; you drive past thousands of people a day—you’ll give yourself carpel tunnel waving at all of them. Plus, half of the drivers will think you’re crazy.

For the longest time I couldn’t understand why complete strangers would smile and wave at me as I was cruising down the road. Did I know them? Did they know me? Was it a case of mistaken identity?

Going off to college in a predominantly rural state meant I passed a lot of people who waved at me as I stared back. It never really bothered me to ask anyone why they did this until my junior year of college.

My boyfriend is from the whopping-huge town of Akaska, S.D. (population 42, but ten times that during fishing season). He has his various opinions about us unfriendly city folk, and one of them is how rude we are because we don’t wave. The first time he made this comment I was riding along with him in his pickup truck.

“Maybe they don’t wave because they aren’t use to it,” I suggested. “Not everyone was raised to do that.”

“Well it’s not like it’s that hard,” he said, mocking me as he waved both his hands in the air, only stopping when the unmanned steering wheel started moving us into oncoming traffic.

“I’m not saying it’s hard, I’m just saying that some people might not know what you’re doing. They’re probably wondering who the big ugly stranger is that’s waving at them.”

I got a dirty look for this comment, but was unrelenting. “I never knew why strangers were waving at me.”

“Well now you know,” he said, making his point by waving to someone passing us by. “They ain’t mistaking you for anyone; they’re just trying to be friendly. And you are being rude by not being friendly back.”

Feeling a little bad for slighting all of these strangers for so many years, I resolved to learn the art of waving, South Dakota-style.

Rule one: Never take your full hand off the steering wheel—you look too eager.

Rule two: Make a choice early on and stick with it—are you waving with all five fingers? One finger (preferably not the middle one)? Two fingers?

Rule three: Try to smile, or at least look kind of friendly. The effect should be something that looks completely natural.

I’ve been working on this for half a year now, and I never look natural. When I’m in Aberdeen, I never wave—too many people. Once on the open road, I get so caught up in my music or day dreaming that I don’t notice a car is coming until they’re right beside me. Too late then. It’s even worse when they pass you, waving their friendly wave, and you notice only a split second beforehand; far too short a time to react “causally.”

Once, for a whole two hours coming home from my boyfriend’s place, I never removed my hand from the top of the steering wheel. I waved at every single person that passed me. I don’t think many even saw me in my low-riding Ford Thunderbird. Some looked but did nothing. There were a few, though, that waved back.

And every time I successfully waved South Dakota-style (even though I still looked pretty awkward) I smiled and felt like I had achieved something.

Elizabeth Zappa can be reached at elizabethzappa@yahoo.com.