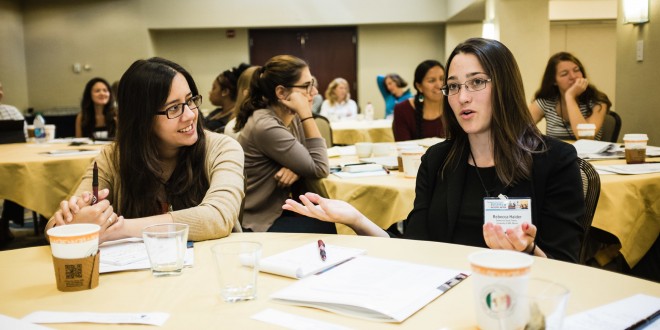 Approximately 25 young leaders, including Sarina Otaibi, ‎Director of Communications and Engagement at Clean Up the River Environment in Granite Falls, Minn. (left), and Rebecca Haider, Data Services and Outreach Coordinator at the Center for Small Towns in Morris, Minn. (right), gathered Sept. 8 in Washington, D.C., to learn about framing rural issues in a way that grabs the attention of policymakers and grant gatekeepers. The event was a precursor to the National Rural Assembly. (photo by Shawn Poynter, The Daily Yonder)

A table of six young leaders from across America hashed out the definition of the word “rural” during Young Leader’s Day at the National Rural Assembly in Washington, D.C. 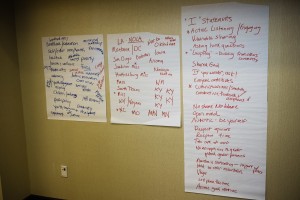 In a framing exercise, we discussed what we most want policymakers to know about the places that, to us, epitomize the institution of “rural,” as well as the biggest roadblocks we face in shedding light on the issues that need attention.

We talked about populations—Hattiesburg is home to 45,000 of Mississippi’s 3 million residents, and Ethan, as home to 350 of South Dakota’s 850,000. Isolation from necessary amenities, such as healthcare and fresh foods on the nation’s reservations. Distances from modern conveniences, like Target stores. Visions of poverty and dilapidation in some parts, and picturesque “Mayberrys” in others.

We found that, like many things, the perception of rural is contextual.

Really, “rural” is a relationship between communities of varying sizes and resources within one geographical region—often, a state.

Amid a blurry array of definitions of the concept of “rural,” one thing was abundantly clear. 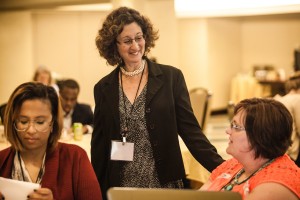 Jane Feinberg, Founder and Principal of Full Frame Communications, facilitated a conversation on “How to Frame Rural Policy Issues” during Young Leader’s Day, a precursor to the National Rural Assembly in Washington, D.C., on Sept. 8. (photo by Shawn Poynter, The Daily Yonder)

Jane Feinberg, Founder and Principal of Full Frame Communications, encouraged the 30 young leaders at a Young Leader’s Day for the National Rural Assembly focused on “building an inclusive nation” to re-examine how they present ideas for change in their communities, from the local level all the way up to working with state and national policymakers. She pointed out that how we frame “rural” to the world deeply impacts the perception the world has of “rural,” and can impede the ability of rural leaders to affect the policies and systems that so greatly impact our lives, both personally and professionally.

Typically, people—both rural insiders and urban outsiders—have a vision of one of two brands of rural, according to Feinberg. They imagine rural places as ones of either utopia or dystopia. Essentially, this is the difference between societal perceptions of The Waltons, versus HeeHaw.

At one extreme, rural poverty is seen as a natural state, of which rural people are proud, because they’re sacrificing money and opportunity and posterity to live in a place, with people who make them happy.

On the other hand, rural people are seen as dysfunctional, backward, unsophisticated, uneducated people, who are disinterested in working for a living.

Neither of these perceptions, Feinstein pointed out, is true, and neither helps rural America, because neither is much of a catalyst for policymakers to spur change in rural areas.

“It represents the real America, so leave it alone, and let it be a ‘museum,’” often becomes the thought process, she said. “The people chose it, so deal with it!”

Citing ideas from George Lakoff’s Don’t Think of An Elephant!, Feinstein said the key in sparking policymaker interest in rural issues lies in avoiding placing the focus on the differences between rural and other areas and stating the problems first. Instead, she recommended conversations start with an appeal to a common ground through pointing out what “we all” desire in our communities, providing a metaphorical situation of reference, and then proposing a solution, followed by factual data to back up the need for the solution.

“You know something needs to be fixed, or we wouldn’t be trying to make changes,” she said of a conversation with grant gatekeepers about the order of questions on grant applications. “Why not start with solutions?”

This story is a first-hand account of Dakotafire Managing Editor Wendy Royston’s experience at Young Leader’s Day of the National Rural Assembly in Washington, D.C.