Print This Post
CO-OPETITION is a new way of thinking about business. Some people see business entirely as competition.

“CO-OPETITION is a new way of thinking about business. Some people see business entirely as competition. They think doing business is waging war and assume they can’t win unless somebody else loses. But business is both co-operation and competition. It’s CO-OPETITION, a word coined by Ray Noorda, founder of the networking software company Novell: ‘You have to compete and cooperate at the same time.’” – Adam Brandenburger and Barry Nalebuff

Co-opetition is based upon the mathematics concept of Game Theory. It was pioneered in the Fifties as a way to calculate global economic trends and Soviet strategy in thermonuclear war. The widespread adaptability of Game Theory was quickly built upon and now-a-days you can see elements of Game Theory in law practice, computer science, evolutionary biology, consumer marketing, military strategy and especially politics. The Median Voter Theorem is why nearly every presidential candidate for all parties are middle-aged white guys in navy blue suits with solid color ties and why they all campaign on irrelevant platforms and why we fall for it every time.

Co-opetition was born of the Prisoner’s Dilemma game theorem which goes something like this: A pair of accomplices are arrested for a murder and put in separate rooms. The DA offers each the same deal – turn the other guy in and get a lighter sentence or go to jail for life. Spoiler alert, the best possible outcome is that neither offers the DA any information, cooperating with each other, thus going free even though they both appear to be competing for the same reduced sentence.

“The key is looking at business as a ‘game.’ Once you do, you can much more easily spot both the competitive and cooperative aspects of what’s going on,” assert Brandenburger and Nalebuff.

To better understand co-opetition strategy in business you first have to draw it out. “After you have a more complete picture of what’s going on, there are some simple concepts that allow you to change the game so you’ll do better.” The Value Net demonstrates the horizontal integration of competitors and complimentors and the vertical integration of suppliers and customers. 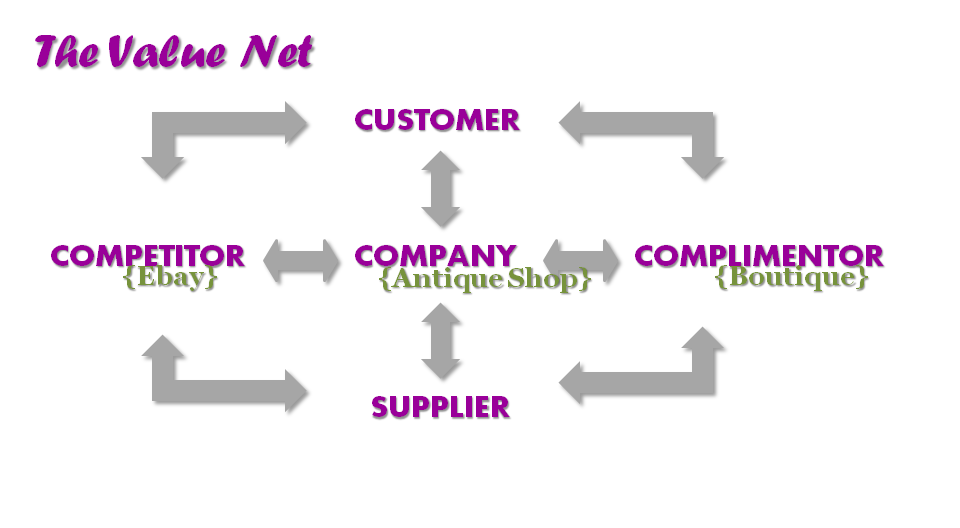 The Players are identified through Value Net mapping. The important thing to internalize is that you are a player and upon entering the game – you change it.

The “Fog” of Tactics is interpreting the perception and intention of the other Players in your Value Net. You will not always have perfect information but Tactics is about “actions that players take to shape the perceptions of other players.”

“No game is an island.” Scope is about understanding the links amongst all the players as well as the linkage between your Value Net and other players’.

Be Ready for Change

“Once you start considering what you’re currently doing from the perspective of game theory, you’ll stop taking many features of your business for granted. You’ll realize you don’t have to accept the game you find yourself in. This realization is itself extremely liberating.”

Chances are you’ve instituted some of the elements of co-opetition already but a systematic analysis of your Value Net may allow you to think outside the box and reap some added rewards from your efforts.

To further explore Barry Nalebuff and Adam Brandenburger’s CO-OPETITION you can purchase a copy on amazon.com or visit their website at http://mayet.som.yale.edu/coopetition/ .