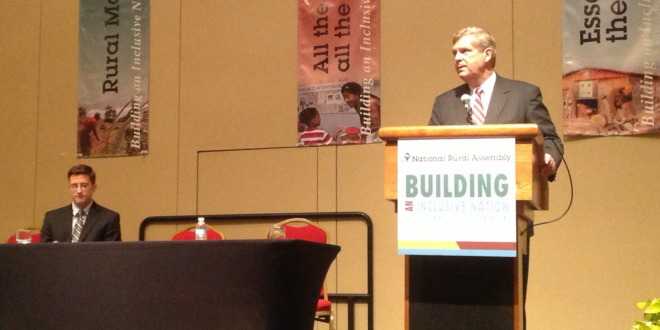 After raising the issue of the relevancy of rural places to the national political conversation last December, U.S. Agriculture Secretary Tom Vilsack took a step beyond that Tuesday as he addressed the National Rural Assembly: Why aren’t rural advocates outraged when rural places are dismissed as irrelevant?

Vilsack was speaking specifically about the failure of the U.S. House to pass the farm bill last week. He listed aspects of the farm bill that were important the whole nation as well as rural America, such as opportunities to improve trade, conservation for better water quality, specialty crop and local food programs—all of which were voted down when the farm bill failed to pass.

“What did we see from rural advocates?” Vilsack said to the audience, many of whom were rural advocates. “Utter disappointment. Are you kidding me? There ought to be outrage. For what’s at stake—the livelihoods of 50 million people, 16 percent of America’s population—and all we get is extreme disappointment?”

Vilsack said he loved the theme of the assembly, Building an Inclusive Nation, but that those who care about rural places are going to have to fight for that vision.

He argued that the U.S. Senate did more to reflect small-town American values by finding more than the 60 votes needed to pass the bill, despite an ideological divide just as deep as that in the House.

In small towns, people gather in coffee shops, church basements and school lunchrooms to hash out solutions, Vilsack said. “They realize they are in it together. They can’t afford the luxury of division.”

Vilsack had started off his speech with a response to the issue of the relevancy of rural places to national politics. He listed key ways in which rural America is not only relevant but essential to the nation as a whole, starting with the fact that the U.S. has the capability to produce all the food the nation needs; we import food as a luxury, not as a necessity. Natural resources for the nation’s energy needs and a significant portion of the nation’s jobs are also rooted in rural areas, he said.

“We don’t market the extraordinary opportunities that exist in rural America,” Vilsack said, “and we make it more difficult for young people, bright young people, to see their future there. Many who are raised there leave and don’t come back.”

And fewer people means it is politically more difficult to get policies passed that benefit rural America.

Without policies that encourage revitalized rural places, the population trend will continue, Vilsack said. “And we will have fewer and fewer and fewer members of Congress that have any understanding of rural America, much less care about it.”

One of the arguments for the importance of rural America is its values system rooted in the idea of service and giving back, Vilsack said: People who grow up making a living from the land know that the can’t keep taking from it.

“If we don’t repopulate these rural places, that values system will continue to shrink,” he said.

He finished with a call to action.

“We have a very important mission,” Vilsack said, “to demand an understanding and an appreciation for those who live, work and raise their families in rural America and the contributions they make.”