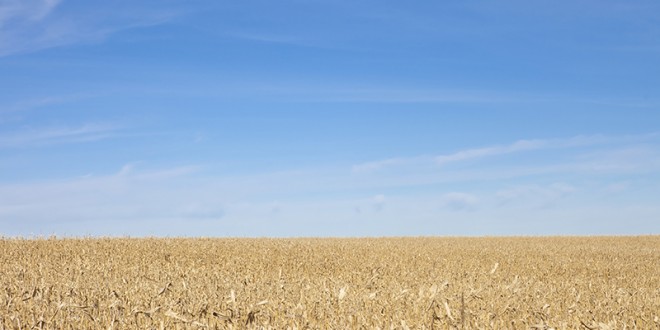 Drought didn’t affect farmers in the northern James River Valley this year as much as was feared. In fact, many farmers have had a harvest that could be called good in any year, even without a drought weighing down expectations.

Subsoil moisture from several wet years gets much of the credit for a successful harvest, but improvements in seed varieties to tolerate stress are also a significant factor—such improvements have increased yields nationwide by 1 percent a year over recent decades, according to a 2010 Iowa State University study.

Now, seed companies are releasing corn varieties that are specifically developed to tolerate drought. The varieties won’t be available in a general commercial release in the Dakotas until next spring, but trials have been conducted here and elsewhere in the country.

This year’s drought gave the new varieties a chance to show what they could do. Final reports have not been released yet, but early harvest reports show better yields among all of the drought-tolerant varieties grown in low-water conditions, ranging from 5 percent to 15 percent more.

The new varieties cost more (planting Syngenta Artesian, for example, costs about $10 more per acre), so farmers are busy doing the math before they make next spring’s seed purchases.

“It’s a good idea,” farmer David Heinrich of Raymond said about the new drought-tolerant varieties. “But a guy needs to weigh the cost versus the return increase you’ll get out of it. Everyone has to evaluate that. If the cost isn’t too high, I’ll try it next year.”

Whether that yield increase is worth the extra cost comes down a bet with Mother Nature: Will the drought continue next year? And if so, how bad will it be?

Climatologists are hedging their bets on the upcoming season. The fact that the El Nino weather pattern has not formed as it typically would after the La Nina pattern faded means neither one is affecting weather systems, so precipitation is hard to predict. In an Iowa Farmer Today story, Iowa climatologist Harry Hillaker said the widespread nature of the drought combined with low humidity levels makes it hard to get out of a drought. South Dakota climatologist Dennis Todey, speaking during an Oct. 18 conference call, said spring planting will likely be affected. “I see no way for us to resolve this drought before next spring. I don’t see any way for it to happen,” he said, as quoted in a Yankton Daily Press & Dakotan story. “The soil is so dry, I don’t think we can put enough moisture into it before it freezes up.”

The new drought-tolerant varieties tend to do best in a moderate drought. When rainfall is adequate, they do modestly better than other hybrids, but probably not enough better to be worth the premium seed price. And the seeds aren’t like magic beans—in the midst of an extreme drought, not even these varieties will grow.

Gustafson pointed out that other factors can be just as important as seed variety in determining whether a crop will withstand drought conditions.

“One of the big factors that comes into play is proper fertility,” Gustafson said. “Roots will use up water looking for food, so you can help yourself with a good fertility program.”

A report issued this summer also suggested that farmers wanting to do better in drought conditions should also consider changes in farming practices. Increasing organic matter in the soil can help it retain moisture, so reducing tillage, diversifying crop rotations, or using cover crops can be important drought mitigation tools, according to the report.

Called “High and Dry: Why Genetic Engineering Is Not Solving Agriculture’s Drought Problem in a Thirsty World,” the report by the Union of Concerned Scientists also critiqued Monsanto’s DroughtGard variety (developed through genetic engineering) as not producing as much improvement in drought tolerance as varieties developed using traditional crop breeding methods, despite the higher cost of developing GE traits. Monsanto has not yet released the cost of its DroughtGard varieties for farmers.

Farmers will weigh many factors and the best information about what the next year will bring as they make plans in coming months.

“The fact that the weather will be different this coming year than the year before is the one guarantee farmers have,” Gustafson said. “But we have a lot of good farmers out there that have their plan and will stick to it, doing things to help minimize the risk as much as they can.” 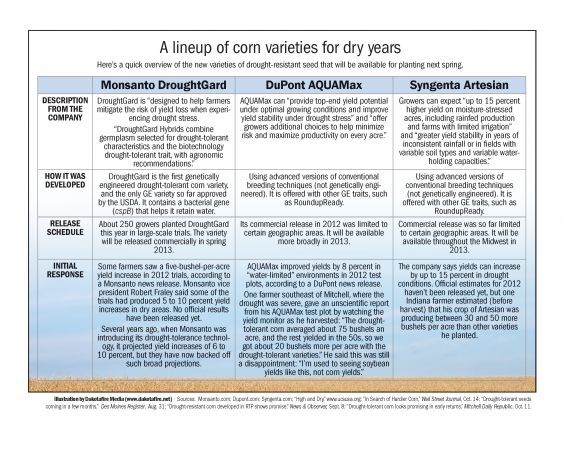