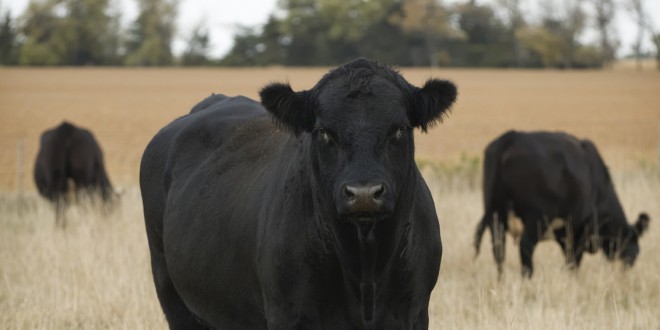 A Black Angus bull standing in the pasture while others feed in the background.

Livestock producers feel the squeeze from drought and high feed prices, but no big selloffs locally

Unlike their West River counterparts, most Day County and northeast South Dakota livestock producers aren’t culling their herds due to drought and/or the specter of high feed prices.

A check with several state farm agencies and sale barns found that cattle sales the past few months are on par with previous years, indicating producers are in no rush to dump cattle because of a feed shortage.

Warren Rusche, an SDSU Extension Service cow/calf field specialist in Watertown, said he has seen little culling in his regional travels up to this point. He says that’s because conditions here are better than in the western part of the state where big numbers of cattle have been showing up at sale barns due to the drought.

Mark Hanson, a Day County cattle feeder and livestock hauler, thinks local cattle producers haven’t had to sell off their herds yet, but warns if drought goes into next year that will change.“I would say it has (sell-offs) been pretty uneventful, but the jury is still out on how high feed costs will go,” he said.

“Seven-dollar corn doesn’t help us,” he continued. “Ethanol byproducts (feed) are getting too high. Most of us have enough feed for a year, but if it’s dry next year we will just have to see. When feed costs get high you either find ways to cut cost or you sell off.”

“There’s been a lot of cattle coming off the range this summer,” he said, “but now it’s getting tough to find any loads to haul anywhere. I’ve had maybe three local loads this summer, and they came from customers who weren’t culling, they were just doing regular business.”

Like Hanson, Pesall wonders about feed supplies for next year should the drought continue. “We have six cows and a few horses, and we don’t have any hay ground,” he related. “Our regular supplier came around and asked us if we wanted more hay now because there might be a shortage next year, and then only certain people will get it.”

Andover area dairy farmer Andy Paulson is one of the victims of the high price of feed/drought. He recently took his herd of 30 milkers to another dairy farm that has enough feed to carry them through the winter and has taken a full-time job in Aberdeen. Paulson controls about 360 acres and raises 200 acres of corn, most of which is in contracts to the ethanol plant or grain elevator.

“We don’t have a lot of pasture or hay land, and the high cost of corn really hurts,” he said. “Last year we used 300 round bales and this year we got 45. It’s been a rough summer, but you have to take what Mother Nature gives you.”

“Everyone (dairy farmers) is in a survival mode right now,” said Paulson who took over his herd in 2003. “I love doing this, and I’ll get right back into it once I know I can get enough feed.”

Rusche says one of the cow/calf producers’ big concerns, how to get more feed, may have been lessened now that USDA opened up CRP acres to grazing or haying.

He notes the farther south one goes the less rain there’s been. Consequently, parched cornfields starting around the Hwy. 14 area are starting to be chopped versus combined.

The cow/calf specialist thinks there could be plenty of feed available in the coming months, but how producers carry herds over until then is the immediate question. Rusche also predicts that if feed prices skyrocket some producers may opt to cull the bottom 20 percent of their herds for better efficiency.

When feed costs go up, the value of calves gets pressured, which means producers have to watch both income and expense factors.

Blaine Hellwig of Sisseton Livestock hasn’t seen a rush to the sale barn. He says crops in his trade area look good, and as a result, there’s been little or no selloff of beef or dairy cows.

Acting Day County FSA director Stacy Mount echoed his comments, saying, “We’ve been in sort of a bubble here. We’ve been lucky with all the rain we got. We have heard some talk about weaning calves early with the intent of selling them early, but not a lot about herd reductions.”

A spokesman from South Dakota Livestock Auction in Watertown said there has been a trickle of sell-offs. He said one farmer brought in 20 head of cattle last week because of a feed shortage. He also noted some producers are also talking about weaning earlier with the idea of selling earlier this year.

“We’re still considered the garden spot around here,” he concluded. “Things get worse when you go west, starting around Doland. Seven-dollar corn isn’t helping much either.”