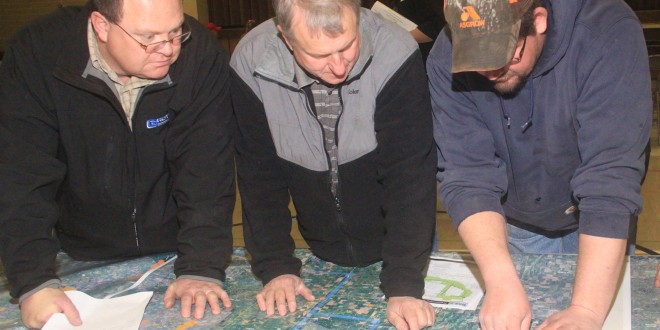 Some wind projects now stymied by lack of lines

A new electrical transmission line may be coming to the horizon near you.

The proposed line will run 150 to 175 miles between a new substation in Ellendale, N.D., and a substation near Big Stone City, S.D., and the companies behind the project have narrowed the possible routes to three main options.

Public meetings were held in communities near the proposed routes during the last week in February to get input on those route choices. One of those meetings was held in the Groton High School gym, where representatives from Otter Tail Electric and Montana Dakota Utilities, the owners of the project, were on hand to visit with landowners.

Mark Hanson, a project spokesman, and Dean Pawlowski, project manager, were the facilitators of the presentation.

This is one of 17 projects in the works in the Upper Midwest. The reason the new line is planned is because the current transmission system is getting full. This new line will increase capacity. It will off load the smaller transmission lines so new wind generation facilities can be hooked up through the smaller lines.

One impetus for the companies to look into a new transmission line a few years ago was the energy generated by new large-scale wind projects in North Dakota, which would mean that electricity would flow southeast from the wind farms along the new transmission line to larger population centers.

Since then, the oil boom in the Bakken region of North Dakota has affected the situation, and at some point the flow of electricity may need to go northwest to serve the Bakken’s increasing electrical needs, according to Pawlowski.

The design process should take until 2016, but Pawlowski said that the final route application should be submitted to the South Dakota Public Utilities Commission by late spring or early summer.

“Be patient as we work through the process,” Pawlowski said. “We think we can work with the landowners. We rarely use eminent domain.”

The lines require 150 to 180 feet of right of way, depending on the type of pole used. Landowners would receive payments for the use of the land. Farmers could still farm under the lines.

One meeting attendee questioned why the line would not be dug underground, given current technology. It was pointed out that due to the size of the line, cooling stations would have to be added every quarter to one half mile, and that would make the project eight times more costly.

Other meetings were held in Ellendale, Webster, Britton and Milbank. 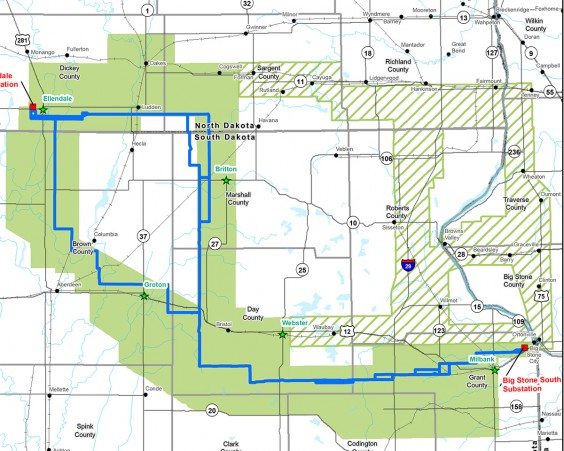 The blue line shows the proposed route options for the new transmission line. The green areas show those still under consideration, while the green hashed areas show routes no longer being considered for the line. Image from www.bssetransmissionline.com