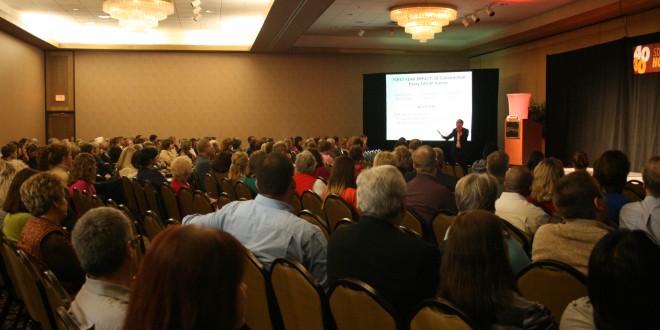 Five Quotes to Note From the S.D. Housing Conference

The 2013 conference of the South Dakota Housing Development Authority, held in Pierre in November 2013, celebrated the 40th anniversary of the organization. Here are some words from just a few of the speakers at the conference that might interest Dakotafire readers. 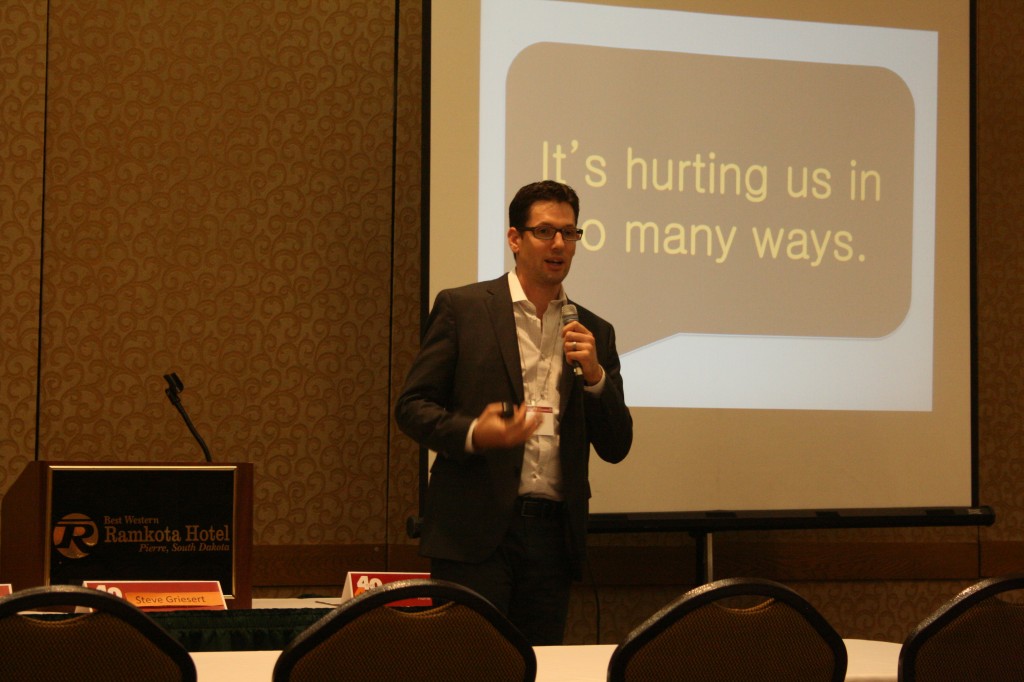 “About seven, eight years ago we started to hear this a lot from communities. Even though populations were shrinking, even though economic development was tough, we kept hearing, ‘Hey, we have a housing problem.’ …“And then, a couple years ago we started to hear the same thing but a little differently: Hey! We need to solve this housing problem!’ … Our communities suddenly found themselves in crisis mode around housing. …“It doesn’t matter the size of the community. The same is true in Sioux Falls, and Rapid City, and Aberdeen, where we’ve been hearing it. We’ve also been hearing it in and Martin and Faulkton and Miller and Wagner and Gettysburg and in communities like that. And everything in between.”

Bartmann explained that while these communities recognize they have a housing problem, they often have no idea what to do next. Many agencies had resources to help with projects—but many communities had no idea what projects should be done, or how to go about getting them done.

The Home Address program was designed to slow the process down: Instead of jumping into a building project, Home Address communities start with a housing study and a gathering of the community to discuss the findings. They also look at the whole picture of housing, including maintenance and demolition instead of just looking at new construction. Coaches guide the process.

Four communities were selected to take part in the program through an application process. Community coach Mike Knutson says they are seeking funding to continue the project with two to four more communities next year.

“In our community, our housing issues are a tangled web of interacting things. It’s very complicated. More so than we realized when we started the project. …We needed to dive deeper than we would have without (Home Address coach Joe Bartmann’s) help.

“In most rural communities, when it gets down to doing things, the people that make it happen are ag-related people like myself. We’re action people: Here’s a problem, let’s get to the solution. … Having done that, we’ve made some mistakes. We wouldn’t understand the problems nearly as well had we not gone through this process.”

—Roger Dieter, farmer from Faulkton and participant in the Home Address program

“It’s kind of a perverse reality that our rural communities have to be smarter and sharper than the big guys. Sioux Falls has tons of resources. They can work in silos … do all kinds of things. But the resources are so big that it masks (errors). In our rural communities, we have a little, tiny margin of error.”

Beddow was speaking about the Home Address program’s mission, “building community capacity for strategic housing development, now and in the future.” Beddow said the “in the future” part was absolutely vital. 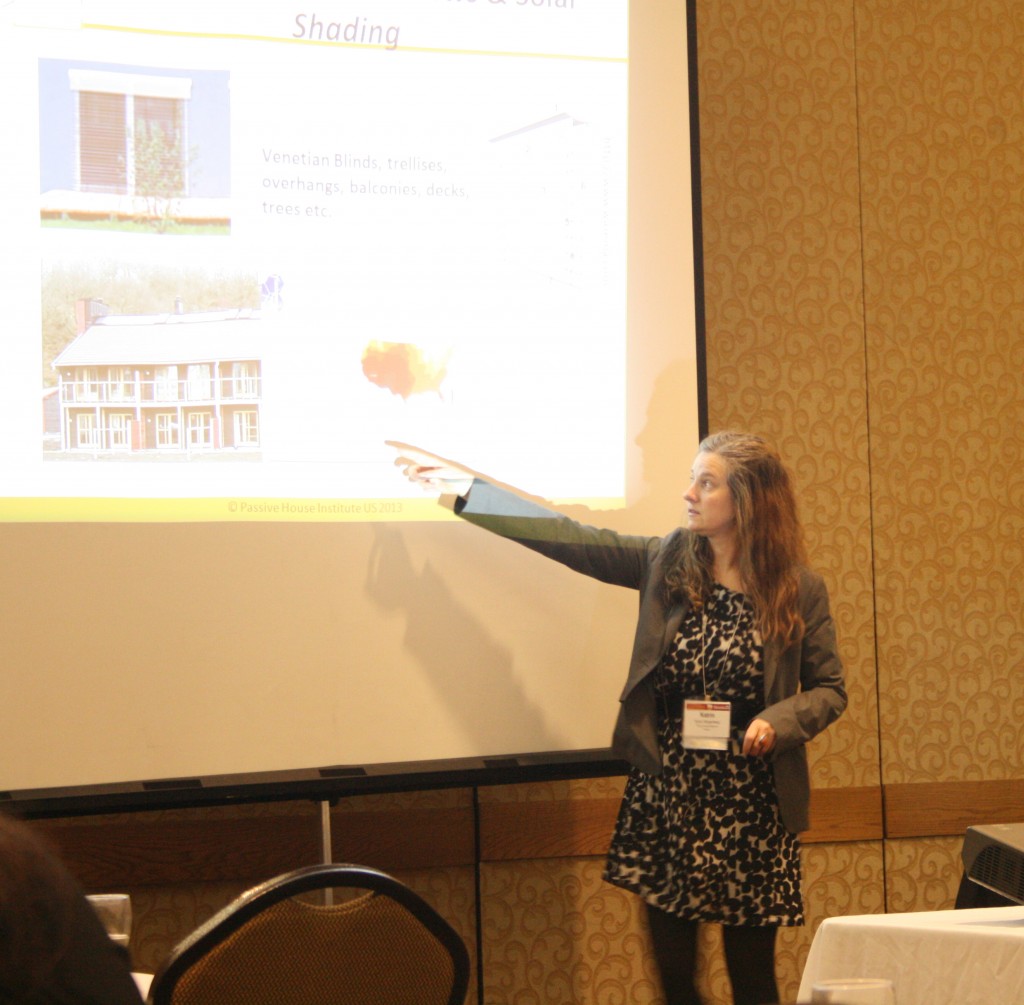 Katrin Klingenberg explains some of the technical details of a passive house. Photo by Heidi Marttila-Losure

“That is the great promise (of a passive house): To get a house that is in balance, that is resilient to various disasters, temperature swings. When the energy goes out, the house never drops below freezing because it is super insulated and you still get some solar heat. And we can get to zero energy.”

—Katrin Klingenberg, executive director of the Passive House Institute US. 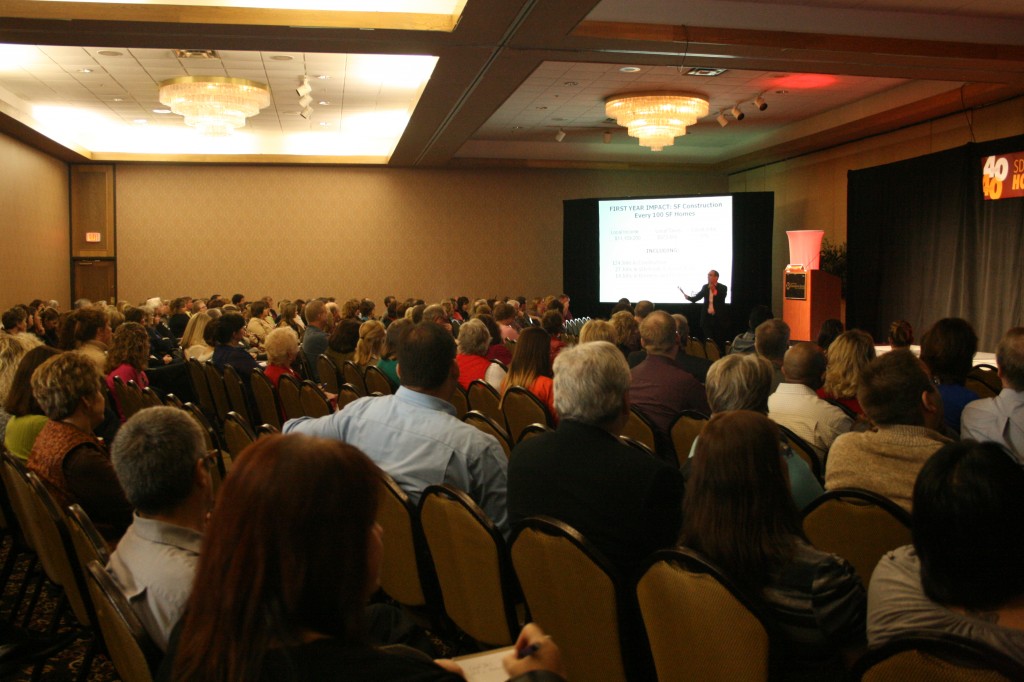 “When you build a house, you get this huge short-term effect, and then this very sizable, very long-term impact. So there are real long-tern benefits to having someone move to your community and making sure they have a place to live. If you don’t build homes, they are not going to come. That’s for sure.”

Eisenberg did an analysis of the Sioux Falls, S.D., metro area and found that for every 100 single-family homes built, the area benefits phenomenally. In the first year, the region gains with about $12.2 million from direct construction spending and taxes, plus 179 jobs. There’s also a “ripple effect” that first year (for example, those construction workers buying lunch or getting a haircut) of about $6 million and 93 jobs.

That means in the first 10 years, according to Eisenberg’s analysis, building 100 single-family homes adds to the economy $43.8 million in local income, $7.3 million in local taxes, 272 temporary jobs and 53 permanent jobs. About 44 percent of those jobs are in construction—but more than half are elsewhere in the economy, Eisenberg said.

“This is tremendously stimulating for the economy,” he said. “Housing is truly a wonderful thing.”