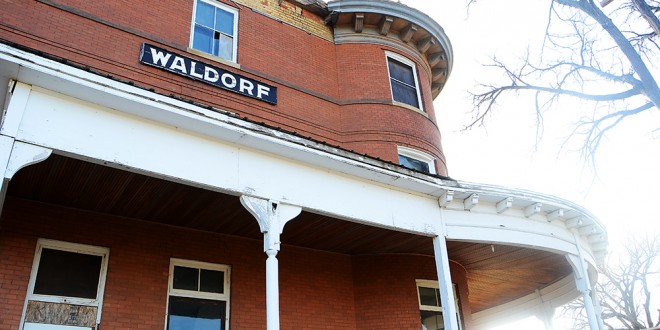 The Waldorf Hotel in Andover, S.D., was once an elegant destination on the prairie. Photo by Troy McQuillen

By Webster Reporter and Farmer January 9, 2013 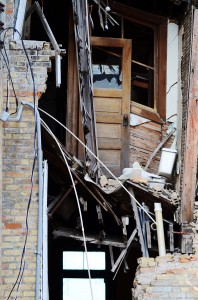 Door to nowhere on Waldorf Hotel in Andover, S.D. Photo by Troy McQuillen

Once known for elegance unmatched anywhere in the country, the Waldorf Hotel on Main Street in Andover attracted hundreds of people for world-class dining, dancing and comfort.

In 1903, the Waldorf was a glamorous retreat from a region that was just being settled. It was modeled after the Waldorf Astoria in New York City and featured an elegant reception room, large dining room, barbershop and pool hall.

Today the building has reached a point where it may collapse on its own. Part of the south wall has come down and is putting pressure on the north wall.

It’s not an unusual situation in the rural Dakotas. Many grand buildings were put up in the early years of settlement, when new residents had visions of remaking cities of the East on the Great Plains. Most had brief glory years before depopulation in their communities’ limited resources, including funds needed for maintenance. And with fewer people in the area, the residents who were left sometimes wondered why they should preserve a building few would use or appreciate.

In the case of the Waldorf, the situation is made more complicated because the building does not have a local owner, explained Jennifer Brosz, historic preservation specialist with the South Dakota State Historic Preservation office. Even if the community wanted to preserve the building, they can’t take action.

“If there was a local owner there who was interested in preserving it, we would be able to come and meet on site with them and make recommendations as far as what repairs could be made,” she said, adding that there are some preservation incentives for buildings on the National Register of Historic Places that could be utilized. But without a local owner, there’s not much they can do.

The building’s last guests were in the early 1970s. Warren Bingen bought the hotel in 1996 and set up a tax-exempt corporation to preserve the local landmark, which was put on the National Historic Registry in 1979. That group made some repairs to the roof of the building and replaced the glass in some of its windows.

Ten years later the preservation society sold the property to Robert L. Coleman of Granite Bay, Calif. Coleman died last January, leaving the property in an estate. At the time of the purchase Coleman indicated that his intentions were to restore the building as a hotel or for apartments or condos. That never happened.

Coleman’s heirs were supposed to view the property this summer and come to some type of conclusion on the site’s future, but so far town officials say there has been no contact. The town board says that until the property becomes delinquent they have little jurisdiction, although the board has written letters to the estate to express concerns over the safety aspects of the now deteriorating building, but again they’ve heard nothing.

The Day County Assessor’s Office reports the hotel property isn’t on the delinquent tax list. Nor are any of the other properties held by Coleman’s estate within the city limits. The town has no zoning ordinances in place to deal with these kinds of issues.

“It all comes down to money,” said Ilene Helmer, town board member and one-time preservation society member. “Andover doesn’t have the $30,000 we were told it would cost to take the building down, and most likely neither will any future buyer. It’s a challenge, a Catch 22.” 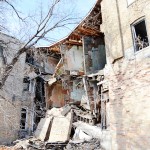 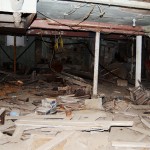 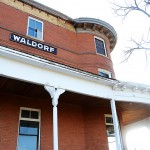 The Waldorf Hotel in Andover, S.D., was once an elegant destination on the prairie. Photo by Troy McQuillen 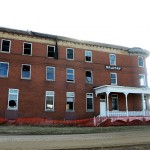 A fence keeps people back from the crumbling Waldorf Hotel in Andover, S.D. Photo by Troy McQuillen 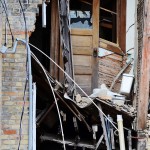 Door to nowhere on Waldorf Hotel in Andover, S.D. Photo by Troy McQuillen

Where do you start with a building you want to preserve?

“Preservation is an incremental process,” Jennifer Brosz of the State Historic Preservation Office explains—it doesn’t happen all at once. The first thing to do is make a preservation plan: What would be most effective in preserving the building?

The highest priority generally is making sure the building envelope is tight, because water infiltration is the worst thing that can happen to a building.

Assessing the building regularly is the best way to preserve a building, because it can help you stay ahead of the curve on maintenance—problems can be addressed before they get prohibitively expensive.

Brosz said preservation can be time-consuming and expensive, but preserving a building can have definite benefits for the community.

“Historic resources help define our communities and what makes us unique,” Brosz said. “A lot of things now are new and cookie-cutter, and … the way we treat our past shows the appreciation we have for our roots and our community.”

Once these buildings are functional again, community gatherings are often held in them; they can also be attractions for heritage tourism, which can have an economic benefit for the community.

But even without the monetary benefit, Brosz said, “they add to the flavor of the local community and the quality of life.”

Jennifer Brosz is available to serve as a resource for preservation issues in northeast South Dakota. She can be reached at 605-773-2906.