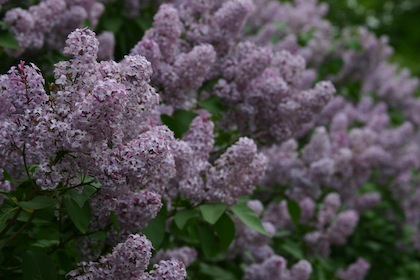 Lilacs are looking good this spring

Lilacs are one of those plants whose lovely flower clusters and sweet fragrance are anticipated by gardeners in many parts of the world, but especially in the colder regions of the United States, Europe and Asia, according to David Graper, Extension Horticulture Specialist and Director of McCrory Gardens.

“While lilacs are not native to North America, they were brought here by the earliest settlers because they were so highly prized in the Old World,” Graper said. “Interestingly, lilacs were one of the first flowering plants to be forced into bloom in a greenhouse by the Dutch back in the 1600’s. There are about 22 different species of Syringa, with nine of these well adapted and commonly available for planting in our Northern Plains climate.”

Graper explains that lilacs are members of the genus Syringa which is derived from the Greek word syrinx, meaning hollow stem.

“In fact, some of the first English common names for Lilac were “pipe tree” and “blow stem” coming from the early use of lilac stems in the manufacture of smoking pipes and even crude needles used in medicine. Our common name of Lilac is derived from a variety of similar words meaning bluish,” he said.

Graper says the primary interest in lilacs comes from the lovely, fragrant clusters of flowers which are freely borne in the spring. He says they do particularly well in our climate.

“Lilacs require several weeks of temperatures below or near freezing to develop the characteristic plump, paired flower buds on the ends of the twigs which prevent most lilacs from being grown in warmer climates in the southern U.S. In fact, lilacs are extremely hardy with most growing well where winter temperatures dip to -30F and can even survive to -40F,” he said.

Lilacs grow best in a site that receives full sun exposure, but they will also do well in part shade. They grow best in a soil with a near-neutral pH as long as it is not too wet. They will perform best if grown in a mulched bed, free from the competition of lawn grass. Supplemental irrigation during drought will also help them to grow and bloom more prolifically. Most plants will grow from 6 to 10-feet in height with a similar spread, thanks to the suckers which develop around the base of the plant on most species except the Chinese lilac.

Older plants will often benefit from regular (renewal) pruning, generally cutting down the tallest shoots to within a few inches of the ground right after they are done flowering. This will encourage new shoots to develop from the base that will generally begin flowering in 3-4 years. If this renewal pruning is practiced regularly, a lilac plant can be managed at a smaller size and also have flowers lower on the plant to enjoy and use for cutting.

Graper says old, overgrown plants can be given a rejuvenation pruning where all the shoots are cut down to within a few inches of the ground.

“This is a great way to reinvigorate an old ugly plant that has gotten too tall and may have lots of dead wood in it. It will take 3-4 years for the plant to begin blooming again,” he said.

Topping of the taller shoots several feet above the ground is not recommended. Often those topped shoots will die back or produce an overabundance of shoots several feet from the ground, while the base of the plant is nearly bare. The Japanese Tree lilac is an exception since it is often trained to grow as a small tree, so it should not be given renewal or rejuvenation pruning.

Lilac flowers range in color from pure white to pink, blue, violet, magenta, purple and even yellow. They may have single or double flowers and range in fragrance from almost none to quite strong. Most are considered to have a pleasing fragrance, except perhaps the tree lilacs which some may find mildly objectionable. Most species and cultivars of modern lilacs have plain green leaves with little fall color, but some have variegated foliage and display interesting fall color, especially the Manchurian and Hyacinth Lilacs.

The best adapted and most commonly available lilacs for the Northern Great Plains include the following, listed with typical height: