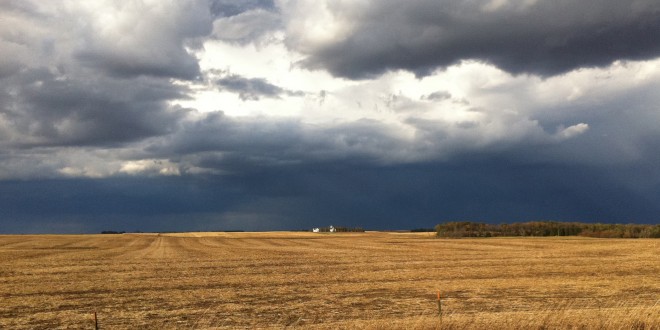 Rural churches, built for a different era, look for ways to stay relevant

Church leaders give suggestions that could revitalize both churches and communities

When many churches were established in the rural Dakotas, about every township had a church, according to Alvin Luedke, professor of rural ministry at Luther Seminary in St. Paul, Minn.

Transportation was more difficult then, so traveling more than six miles to church would have been difficult to do regularly. In addition to serving the spiritual needs of those in the township, those churches also served as centers of community life. 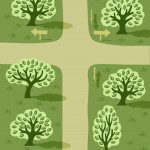 This is the third in a three-part Dakotafire series about the challenges facing our rural churches. See the first two stories in the series:

Today, the picture has changed significantly. “Now there’s a 30-mile church,” Luedke explained. “With improved roads, and folks getting used to commuting, now all of a sudden people drive past several churches to get to the one that they attend.”

This means the church is not necessarily in the center of the place where people live. People also connect in many other ways, besides chatting on the church steps after services.

These and the many other changes mean that the churches that were established for a different time and to serve different needs are often struggling to survive.

“That survival mentality, it’s understandable,” said the Rev. Keith Zeh, Director for Evangelical Mission in Eastern N.D. and Northwestern Minn. Synods in the Evangelical Lutheran Church of America (ELCA). “But surviving for what purpose? Why survive? Get after that. Get a renewed sense of calling—no matter how small the community is, they could and can make a difference.”

Zeh said in his work he often sees that churches have a low self-image that can be damaging to their work. “They are a lot more than they give themselves credit for being,” Zeh said. “When they can rediscover their identity, and that they have a role in God’s vision … and appreciate their own history and all of the ways that God has been at work in their lives over the generations … it starts to changes their frame of reference and their heart and attitude.”

“There is still ministry to be done,” he said.

What role can rural churches play in their communities as they are today? That’s not always obvious.

A recent article in The Lutheran magazine described many of the challenges facing mainline churches and suggested that congregations take some time to discern what their purpose might be. The challenges are “pushing Lutherans to search for new ways to stay relevant and reach the people who most need the light of Christ and are least likely to come to church to find it: the unchurched, the fallen-away and the young.”

The article includes a study guide that congregations can use while exploring their options, including such questions as, “Why does your congregation exist? What are its vital reasons for being?” and “If your church were to close its doors today, would it affect your community? How? Or why not?”

Zeh suggests that congregations look at the needs in their communities—as there may be more need there than they think. 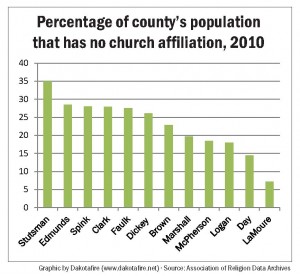 The percentage of people who don’t have a connection to any church is significant in rural areas: The numbers for Dakotafire counties range from 7 percent in LaMoure County to 35 percent in Stutsman County, with the average for all 12 counties at about 23 percent, according to 2010 figures from the Association of Religion Data Archives.

Sometimes people in a church will think they are aware of all the people and their possible needs in their community, but when they go looking for needs, they most often find them, he said. “Low and behold there are people in their town or their township that they didn’t really know, or didn’t know about.” 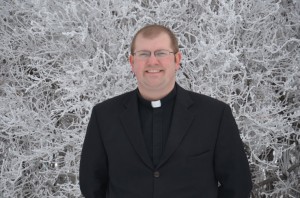 The Rev. Tim Koch of Concordia Lutheran in Cresbard, S.D., and Immanuel Lutheran in Wecota, S.D., said if he asked members of his church (part of the Lutheran Church of the Missouri Synod), “What is the purpose of the church?” they would have a ready answer. They have heard it since Sunday School: “To deliver God’s grace. And how does God accomplish his purpose through church? By the proclamation of his word, and the proper administration of his sacraments.”

That’s a pretty specific answer, and one that might seem to keep the job of the church boxed in by the church walls. But Koch said he doesn’t limit that purpose to church services on Sunday morning.

“Christ saves us, redeems us, so that we might we serve him,” Koch said. “What does that look like? Love they neighbor as thyself. It becomes a relationship with others. We have our God-given vocations, which for me is not just pastor, but husband, and father and neighbor. God has given us the vocation to be placed in this location, at this time, and in the midst of these people.”

The church’s purpose may also include talking about things that aren’t popular or easy to talk about with farm audiences, like the aggressive nature of farming today, or questions about the use of genetically modified organisms or pesticides.

An essay titled “Revitalizing Rural Communities: How Churches Can Help”, by Dr. Fred Kirschenmann, who is professor of religion and philosophy at Iowa State University as well as being a longtime leader in sustainable agriculture and a farmer near Jamestown, N.D., argues that churches are in a unique position to help rural communities create a brighter future for themselves. (The essay is now included in Kirschenmann’s book, “Cultivating an Ecological Conscience: Essays from a Farmer Philosopher.”)

Rural places, Kirschenmann writes, are steeped in a history in which in many ways, “matter alone mattered”: For much of the nation’s history, rural places have not been valued in themselves, but only by the raw materials they are able to produce.

“If we truly want to revitalize our communities, we must come to terms with the fact that more than matter, matters—that there is a spiritual dimension to community health,” Kirschenmann writes. And churches can help spread a message of developing that missing spirituality, he suggests.

Another reason churches are a good fit for helping in their communities is that they are used to talking about having hope even when the situation gives no reason to be hopeful, Kirschenmann writes:

“Vaclav Havel, Paulo Freire, Wendell Berry, and Martin Luther King all have reminded us that hope is not confidence that things will turn out alright, but a commitment to justice even when there appears to be little to be gained by making that commitment. Wendell Berry refers to this virtue as ‘difficult hope.’ … Hope is not a belief that things will go well, (Vaclav Havel) said, but a willingness to work for something because it is right.”

Kirschenmann ends the essay with a call to action:

“With imagination and prayerfulness we can … allow god* to speak to us in new ways that bring new life and meaning to our rural communities.

“And even if we aren’t optimistic about the future, our faith calls upon us to do the right thing—to love god through our neighbors, wherever two or three are gathered together, to service and care for his creation, and to boldly go forward in confidence by faith, with imagination and prayerfulness—to be voices crying in the wilderness where others see no hope.”

Do you think churches have a role to play in revitalizing our communities? What do you think your church (or other churches) could do in your community? Share your ideas at www.dakotafirecafe.com.

*Kirschenmann chooses to lowercase the word “god” in writing “to try and communicate a non-ideological presence of the divine in our midst.”