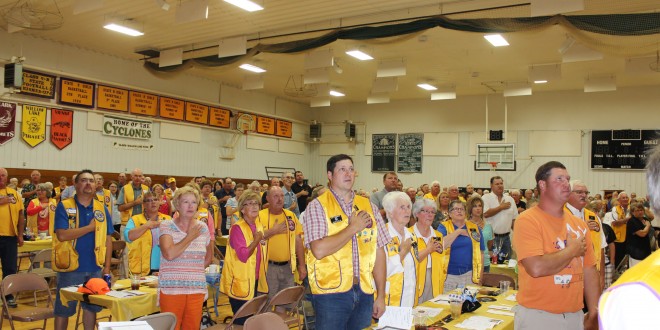 The 50th anniversary celebration of the Willow Lake Lions Club on Aug. 20 started with the Pledge of Allegiance. Photo by Kristin Brekke Vandersnick

At a time when many rural volunteer-driven groups are struggling to maintain their missions and memberships, the 50-year-old Willow Lake Lions Club is just reaching its stride.

In 1965, 25 men signed their names as charter members of the club. Last month, nearly 250 people gathered in the Willow Lake auditorium to honor those founders and celebrate the local Lions Club’s half-century milestone. The crowd included Lions members, friends and family, community members, and visiting clubs—a busload from Clark, plus Lions from Huron, Brookings, Watertown, Ipswich and Miller.

The sea of yellow Lions vests, yellow tablecloths, vinyl record centerpieces and a soundtrack of 60s-era music gave the room a festive feel. Patriotism was also front and center, with the audience joining together on the Pledge of Allegiance, the national anthem and four verses of “America.”

“Fifty years of service is a huge milestone to celebrate,” said Julayne Thoreson, Willow Lake Lions Club president, in her opening remarks. Del Bratland, mayor of Willow Lake and Lions member, added his congratulations and thanks for the myriad ways the Lions Club leads community service in Willow Lake: supporting the swimming pool, creating the new town square, providing college scholarships, and many more. “Thank you, Lions, for helping our community,” Bratland said.

Jerry Voss, the Lions District Governor, traveled from Beresford for event. Voss said he was impressed by the size of the Willow Lake Lions Club—a roster of 37 members is remarkable in a town with a population around 275.

“I think we all owe something to our fellow man,” Voss said, speaking to the community-service aspect of all Lions Clubs. Though it is important to support efforts of Lions Clubs International such as vision screenings and Lions Eye Banks, Voss said, “your community is always first.”

This kind of community involvement by a local service group was once the norm in rural communities, but it isn’t any longer.

“Today, how people are involved has changed significantly,” according to Ben Winchester, a researcher for the University of Minnesota Extension who presented a webinar in 2014 on the topic of rural leadership demands.

“Groups are having trouble in getting people involved in things like chamber groups, but bicycle groups are flourishing,” Winchester said.

Except in Willow Lake, where something different is going on.

One reason the Willow Lake Lions Club is doing so well is its unique funding source for carrying out its community-service mission—a Lions Club “Farm Project,” started back in 1971. 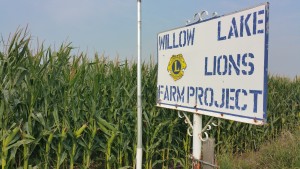 One unique aspect of the Willow Lake Lions Club is its funding source: Members pool their labor and resources to farm 30 acres, and the profits fund the club’s community work.
Photo by Kristin Brekke Vandersnick

It doesn’t look much different than the other fields along Highway 28, and one might even drive by without noticing the small sign that marks its larger purpose. Although the actual location of the farm project has changed over the years, today this particular 30-acre tract located about six miles west of Willow Lake is its home.

The short version of the story is that Willow Lake Lions members donate all of the labor and equipment to plant and harvest the crop, so all of the farming profits can be reinvested back in worthwhile community projects. The longer version of the story looks back to how the farm project began and how some generous sponsorships have given it a new magnitude.

In the late 1960s, some women in Willow Lake had the idea of constructing a swimming pool for the community. The Lions Club got on board with this project, and in 1971 the club’s farm project was launched as a fundraiser for the pool effort. “In 1975 the pool opened, which was quite an accomplishment for this community,” said Dick Reints, current chairman of the farm project and Lions member for the past 39 years. The pool continues to operate today, enjoyed greatly by area youth and families.

The Lions farm project is in its 44th crop year. Originally, the club paid all the expenses relating to the farming, but today it’s getting some help. Wheat Growers, the grain elevator and agronomy co-op in Willow Lake, has become a generous sponsor of the Lions farm project, donating much of the seed, fertilizer, and spraying needed for the field. Sponsorship of these crop inputs from Wheat Growers and other local ag businesses, plus the general uptick in the ag economy, have vastly increased the profit potential of those 30 acres.

With this funding source, the Willow Lake Lions Club might just be the most generous club for its size you’ll find anywhere. The farm project money is generally still directed to the Willow Lake swimming pool, and the club has made donations as large as $25,000 in one year.

The Lions have been generous in their support of other projects as well, including the new “Lions Memorial Park” town square on Main Street, the Erik Schmidt Memorial Fund for college scholarships, and the new wood floor in the gymnasium—just to name a few.

Diversity, hospitality among the secrets for success

At the Willow Lake Lions 50th anniversary event, the great variety of ages present surprised some of the out-of-town visitors. Every decade of ages was represented, from people in their 90s to those in their 20s. The roster is divided almost evenly between men and women, many of the women choosing to join Lions after the local Lioness Club disbanded.

How has the Willow Lake Lions Club managed to get new people—even young people—involved?

“The reason we joined is because someone asked us,” said Marshall Edleman, who with his wife, Carolyn, became Lions members a few years ago and are now actively involved. “We got a letter in the mail with a personal note on it, asking us to become Lions members. If you want to grow your membership, you have to ask.”

That “ask” is a simple, yet vital, piece of the puzzle. Willow Lake Lions Club leaders and members have personally approached people to ask them to join, and the result has been a steadily growing membership roster. The club has grown by 15 members in the last decade or so, and many of the new members are in their 20s, 30s or 40s. 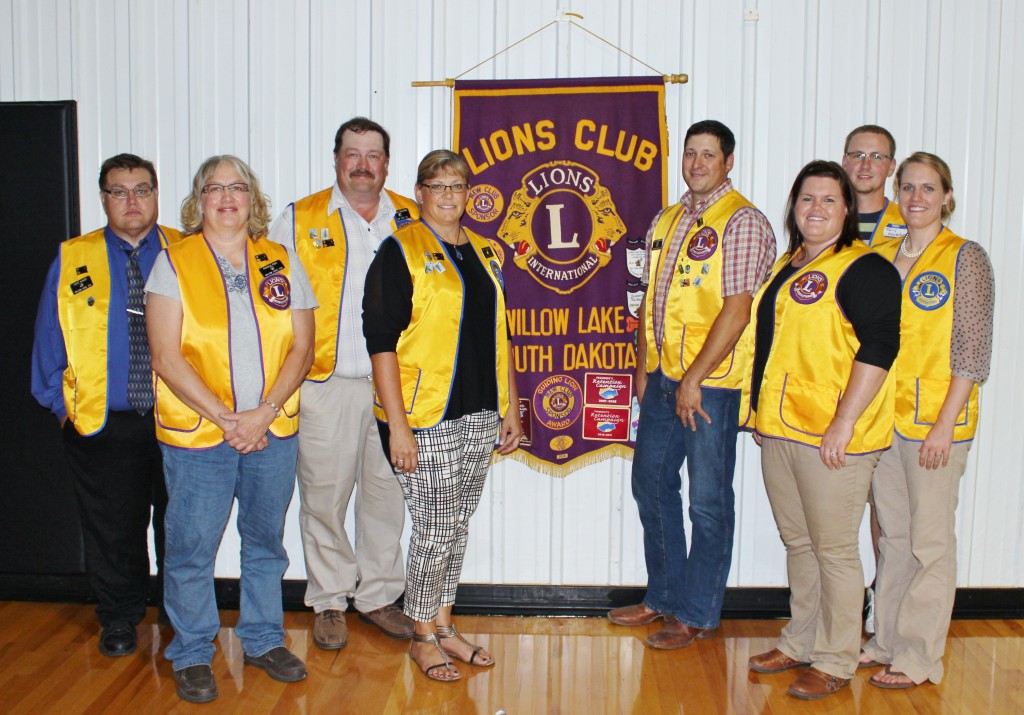 New members and young members are not exempt from leadership roles. The club president position is held by a different member each year, the order determined by a series of three vice presidents who move up the chain each year. At any given time on this leadership roster, you’ll find a variety of ages and number of years in the club. It seems to be a successful leadership strategy, with the right mix of new ideas and institutional knowledge.

The young Lions members polled said they appreciate the meetings being kept fun and fairly short, the older members’ understanding when the younger ones have to miss an occasional meeting due to family commitments, and being notified by email or text message of news and upcoming events.

Regardless of their age, these Lions members have a reputation for generosity, dedication to community service, and being a friendly, welcoming group.

“Over 50 years we’ve had some very, very good Lions members, and that’s what it takes,” commented Don Pommer, past president and long-time member.

“There’s certainly a rich history here, and we’re proud and humbled at the same time to be a part of it,” Edleman added.

Lions Clubs International, founded in 1917, has more than 46,000 local clubs with more than 1.4 million members in 200 countries around the world. The Willow Lake Lions Club meets on the second and fourth Wednesday evenings of the month at The Rusty Nail steakhouse on the town’s refurbished Main Street.