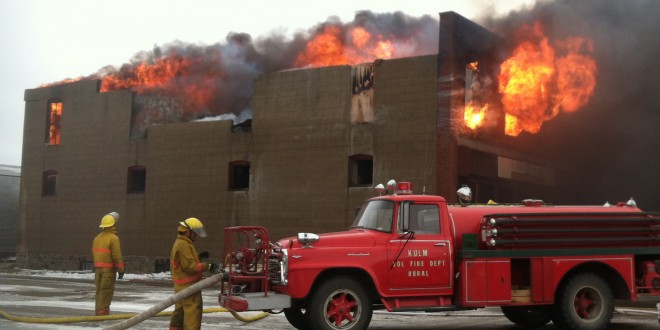 The Gackle Bros. building on Center Street in Kulm, which had played a role in 100 years of local history, burned to the ground Jan. 19.

The fire was called in just before 9 a.m., and firefighters fought the flames for close to four hours. As of Monday night, the building was still smoldering, sending up a thin line of smoke.

The fire began with an electrical short in one of the cars in the repair shop. Duane Batsch is the owner of D & D Repair, which had operated out of the building for about nine years. He and his son, Dustin, attended to the fire immediately with fire extinguishers. When Wes Gackle, the building’s owner, arrived just before 9, the building was so full of smoke, he could barely enter.

“I grabbed a few things right at the front door—a generator, a planter monitor and a tractor monitor—but I couldn’t get in any further,” said Gackle.

The fire department arrived shortly after Gackle, at which time they put out the vehicle fire and gained access to the building. They put exhaust fans in to drive out the smoke and increase visibility. That’s when they noticed flames in the ceiling.

While some tried to knock out the ceiling to send water up, Steve VanGorkom and Nathan Klusmann, both members of the Kulm Volunteer Fire Department, went upstairs to fight the fire from the second floor. Klusmann’s oxygen tank ran empty just as the fire seemed to be out, so the pair left their hose and went down to get Klusmann’s second tank with intentions of immediately returning to soak the rest of the second floor. Unfortunately, once they got back to the truck, they turned to see the second story in flames again.

“We saw then that the fire was in the floor joists, and we couldn’t stop it,” said VanGorkom. “All the dried-out old wood just fed the flames.” During the brief lull in the fire, Gackle entered the building again to retrieve some of the valuable documents he had stored in the building vault. “I filled one box, put it in my truck, and when I turned around to go back there was smoke coming out everywhere.”

VanGorkom entered the building once more with a mask and tank to empty out the vault, but had a hard time finding it. “I couldn’t see six inches in front of my face,” he said.

He was able to recover more documents, but Gackle says he is still missing a lot.

The second floor contained countless items from the different phases the shop went through: mercantile store, roller skating rink, repair shop, car dealership and more. Gackle said he lost many antiques such as a pair of old glass globes from Standard Oil gas pumps, old Chrysler/Plymouth car parts, tools, and his father’s collection of limited edition toy tractors from the 1940s and ’50s.

Batsch lost all his tools and equipment for his business, as well as a 1968 Dodge Coronet that he had been holding onto for more than 20 years, hoping to restore. Diane Batsch, Duane’s wife, said the family feels devastated not only for their own loss but also for the loss of the Gackle family.

It is impossible to put a value on history. Kulm lost a building that witnessed over 100 years of life and served our town in many capacities. Places like that become an anchor in a community and a way to trace history—it is where your grandmother went roller skating as a child, where your uncle worked during his school days, where your father passed the time with friends, and where you used to hide out and look long at the mementos of years past. Individuals hold onto sentimental things for the same reason, but there are few such monuments a town can share collectively.

The smoke will eventually stop, and what’s left will be cleared away. For many years, seeing the Gackle Bros. building reminded us of a vibrant and meaningful past that we all share. It is now our job as a community to jog each other’s memories. Good memories are not only the best medicine for loss; they also help us look with confidence to the future.