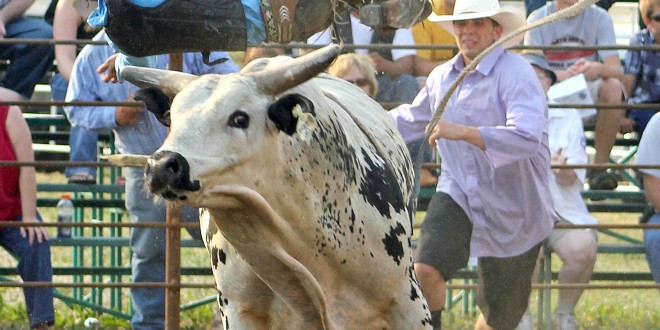 For small towns in the Dakotas, a summer celebration can double the population, creating traffic jams in places with no stoplights and a hum of excitement to some generally work-a-day places.

Here are some great images of some of the festivals held in the Dakotas recently. Click on each to see a bigger version. Summaries of the events follow below. 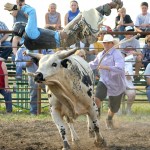 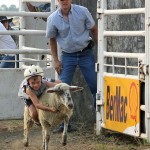 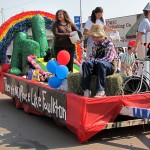 Dorothy and Toto from the Wizard of Oz would have been right at home on the McCloud Family Float “There’s No Place Like Faulkton.” The float captured first in the Best Reunion/Family category. Photo by Faulk County Record 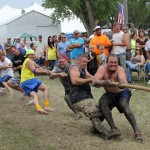 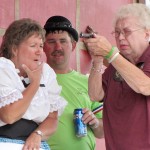 Trial by marksmanship for Dead-Eye Millie Hansen resulted in a “surprise” guilty verdict. Keeping an eye on where she pointed the gun are Susan and Kirk Schaefers. The drama was part of the Orient, S.D., 125th Celebration July 6-8. Photo by Faulk County Record 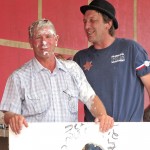 Terry Huss did just to good a job on his 125th celebration duties to suit the kangaroo court officials and received a pie in the face for his efforts. The drama was part of the Orient, S.D., 125th Celebration, held July 6-8. Photo by Faulk County Record 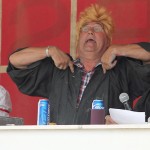 All was not in order at the Judge Craig Huss, center, courtroom. He is flanked by bailiff Jeff Schulte, left and right magistrate Rex Young. Officers of the court were John Hagen and Dirk Schaefers. The drama was part of the Orient, S.D., 125th Celebration, held July 6-8. Photo by Faulk County Record 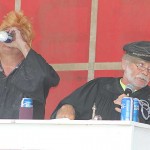 No silly sobriety rules in the court of the less than honorable Judge Craig Huss and Magistrate Rex Young. The drama was part of the Orient, S.D., 125th celebration July 6-8. Photo by Faulk County Record 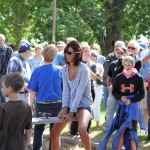 Amanda Kallas and her partner, Wyatt Sumption (not shown), were the winners in the wife-carrying contest, which entitled them to the “wife’s” weight in beer. This was determined by putting Amanda on one side of a teeter-totter and the beer on the other. Photo courtesy fredericksd.com 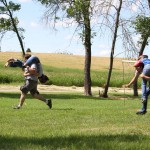 Two of the contestants during the wife-carrying contest round a corner during Finn Fest in Frederick. Photo courtesy fredericksd.com 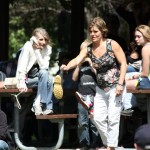 Kim Carlson shows her skills during the boot toss at Finn Fest in Frederick on June 16. Photo courtesy fredericksd.com 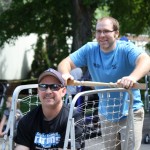 Wayne Haas and Will Weber competed in the bed racing contest during Finn Fest in Frederick. Photo courtesy fredericksd.com 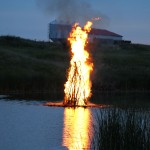 The juhannuskokko, or midsummer bonfire, burned brightly on the Maple River in Frederick. The bonfire is a midsummer tradition in Finland and now in Frederick. Photo courtesy fredericksd.com 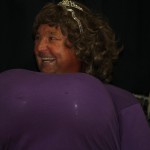 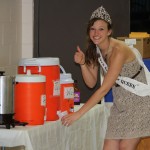 Fourth of July events in Faulkton had a great start with 105 entries participating along a packed downtown parade route. Parade chair Diane Hushka was happy with the final entry number and thanked everyone who helped organize and judge the entries.

Orient knows how to have a celebration!

It’s all over but the cleanup as Orient shows again that they know how to have a celebration.

This 125th Orient Celebration was a great example of community spirit and hard work. The weather also cooperated, with cooler temperatures than the area has seen in the past few weeks.

“It was a very fun, very busy weekend with lots going on,” said Kelly Aesoph, in charge of publicity for the events. “Things ran really smoothly, mostly because we had exceptional help and volunteers putting it together. Terry and Bev Huss did a lot of side planning too and added some special touches. A huge thanks to everyone who helped out!”

“Everybody was having fun, and there was little trouble or drama! The weather was beautiful! Thank you to everyone who came to enjoy and participate in the activities!” Aesoph said.

Other raffle and miscellaneous winners at the 125th:

The Tug of War competition was divided into two groups—a 800-pound division for 14 and under, and an adult division of 1500 pounds. Both were double elimination.