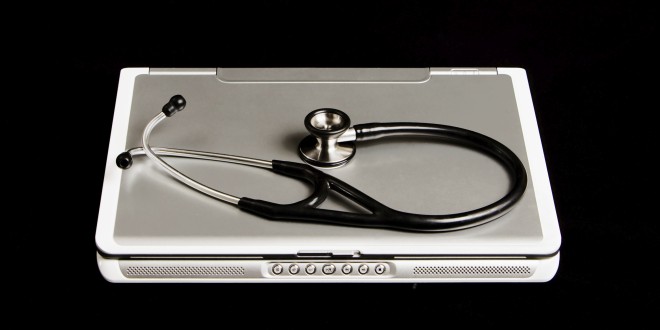 For decades, your medical story was recorded something like this:

You fill out a form—or several—which go in a manila file. Your doctor sees you and makes notes, which also go in the manila file. At the end of the visit, the manila file is carefully put on a shelf in a room full of other manila files. The file grows with each doctor visit, but it likely only tells one chapter of your story—other chapters are tucked away in other file-filled rooms in other doctors’ offices, perhaps in another town where a specialist is located or even in a distant state where you used to live.

One lesser-known aspect of the 2009 stimulus bill, to which details were added in the Patient Protection and Affordable Care Act (or PPACA, also known as Obamacare), is a plan to change how medical stories (including yours) are recorded: No more manila files. Instead, the goal is a system in which all of a person’s medical records are securely stored online, accessible to doctors anywhere with just a few key strokes.

“About 25,000 people are in the process of adopting electronic health records, which ultimately reduces paperwork, eliminates a lot of medical errors, and allows for the first time patients to have good access to their own records,” said U.S. Health and Human Services Secretary Kathleen Sebelius at a speech at the National Rural Assembly June 25. “(With the implementation of electronic health records,) you own your own health data, which is a huge step forward.”

Huge steps sometimes result in stumbles and pain, however. Area hospitals transitioning to electronic health records (EHRs) are making progress, and their administrators say they are confident that they are providing or will eventually provide better care with EHRs, but the process hasn’t been without significant headaches—and there’s still a ways to go before EHRs reach the comfort level of those corner-worn manila files.

The Marshall County Healthcare Center went live with electronic records Oct. 15, 2012. The center hasn’t been reimbursed with its government incentive payment yet, but a check is expected eventually, according to Nick Fosness, the center’s administrator.

“We chased the carrot (federal incentive money) to avoid the stick (a penalty if electronic records not in place),” Fosness said. “We’re glad we did it. It was a big shoe for a small foot, but a necessary one to take a step in the right direction.”

The cost of the new system was about $200,000—a significant investment for a small hospital. The center averages 3.5 patients a day, with 60 percent of those receiving out-patient care. Two nurses are on duty at all times; 92 people are employed by the center in total.

But that’s still part of the “carrot.” The “stick” comes later: If a provider doesn’t meet EHR use goals by 2015, he or she can forfeit a percent of Medicare reimbursement a year, up to a 3 percent penalty by 2018. The penalty could be as much as 5 percent for stragglers, once 75 percent of eligible health professionals are on board.

The goals for the healthcare providers are divided into three stages, all centering on achieving “meaningful use” of the new technology. The first stage, of implementing the new technology and starting to use it, is well under way. As of June, more than 80 percent of hospitals have implemented EHRs, and more than half of the nation’s clinics have done so, according to the Centers for Medicare and Medicaid Services.

Sen. John Thune, along with five other Republican senators, voiced concern this spring about the EHR incentive program, suggesting that the government might be moving too quickly through the stages without determining whether they are working as they should be.

Sanford Clinic in Webster is one of the facilities that has updated its electronic medical records system, adding e-messaging and e-prescriptions as part of that process. “Having the capability to work online will be crucial” to their implementation of the PPACA, said Evelyn Christensen, business manager at the clinic.

Electronic health records are intended to help healthcare providers transition to a new kind of care: Instead of the current model, in which doctors and hospitals are paid for how many procedures and tests they do, healthcare providers will receive government reimbursements based on patients’ health outcomes. The intended change is from quantity to quality.

Making this change, however, requires that healthcare providers have access to lots of data quickly so they can assess what is working and what is not in a patient’s care.

EHRs can provide that data in a way that paper records cannot—especially if that data originated from more than one source.

“The Faulkton Area Medical Center was the first hospital in South Dakota to declare this status—way ahead of either Sanford or Avera,” said Jay Jahnig, FAMC administrator.

Erin Stark, RN/EMR coordinator at the center, said the center is already seeing benefits in information that is available in any location in the building quickly—and remotely if needed.

“If, for example, a doctor needs to be called at home for a consultation, he or she can securely log in to our system with (a) home computer to look at the patient’s records,” Stark said. “With our clinic and hospital systems entirely integrated, it allows for an increased continuity and quality of care.”

Stark explained that eventually the goal is to have the records available to any healthcare provider, which could be very useful to patients if they need care away from home.

“Say one of our regular patients is vacationing and has to make an emergency room trip to another hospital,” Stark said. “This system will allow those doctors and nurses, who would have otherwise had no information in this patient’s medical history, to know what they need to know to treat them effectively. We are working on putting our data on the health information exchange, and we will be one of the first facilities to go live with that in South Dakota.”

Fosness from the Marshall County center said their records are now integrated with all of Avera’s system, and eventually those records will be available more broadly.

“Eventually” might be a fair ways down the road, however.

The government incentives do not mandate which brand of technology to purchase, and as with much emerging technology, the first versions aren’t always glitch-free. Whether all of the systems will work with one another is still in question, for example.

“Some of the software seems to need to be further developed as we go along to make it more accessible for everyone,” said Tammy Miller, CEO of Madison Community Hospital. “I don’t believe that’s a problem at just our clinic, either—everyone I talk to agrees.”

“The biggest hurdle was getting our people, especially our medical providers, to use the computer system,” Stark said. “More than anything, this was because our doctors wanted to give their patient the most personal attention possible, and they felt that the tradition of writing up medical records by hand was the best way to do that. It was a matter of shifting that concern and focus to the patient care they were already doing.”

Fosness said the staff in Britton knew change would be difficult, but they did a good job of accepting the changes.

And do these healthcare administrators believe all the implementation challenges are worth it?

“I believe at the end of the day electronic records helps us provide a better healthcare product for our customers,” Fosness said.

Stark agrees: “We have seen many benefits to the electronic medical record and we know that there are more good things to come.”

The process in Madison may not be as far along. When asked whether the records had improved patient care, Miller answered, “Maybe not yet.”

“But I think it will,” she said. “In the meantime we’ll just have to deal with the frustration.”