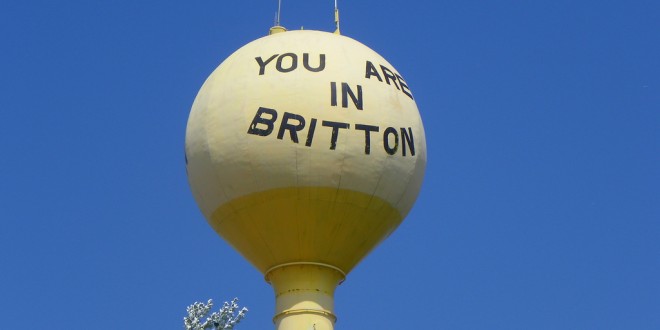 Britton hosted South Dakota Governor Dennis Daugaard, First Lady Linda Daugaard, and other state officials when the city was designated as the state’s Capital for a Day October 3.

A full day of activities began when the governor met with city residents at the school for about 75 minutes, reading a proclamation declaring Britton as Capital for a Day and holding a question and answer session that ranged from the possibility of the state benefitting from the oil boom in North Dakota to education. 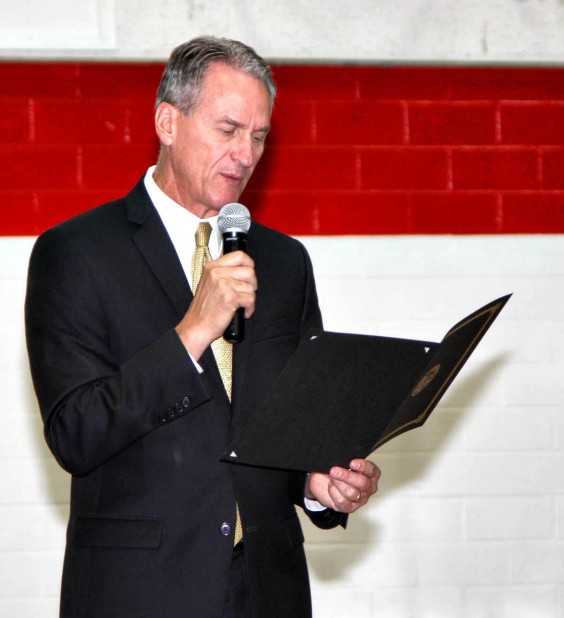 Governor Dennis Daugaard read a proclamation designating Britton as South Dakota's Capital for a Day during a gathering at Amacher Auditorium Oct. 3. Photo by The Britton Journal

The governor responded to a question on teacher evaluations and merit pay for educators and said he doesn’t agree with the current system.

“It doesn’t reflect the quality of the teacher when everyone is treated the same,” he said.  “And I would disagree with the notion that different pay hurts collaboration among teachers.”

Responding to a question from Britton-Hecla Superintendent Kevin Coles on school funding, Daugaard said “everything is on hold until we see where the vote on the sales tax goes.”

Voters will decide in November if they will approve an additional one-cent sales tax in the state with revenues to be split between K-12 education and Medicare.  The additional tax would generate an estimated $180 million.

The governor also stressed his belief in the importance of remaining fiscally conservative.

“We fell into a trap four years in a row with predictions that were recklessly optimistic,” said Daugaard.  “My job is to operate our state government responsibly, and we will continue to estimate our revenue conservatively and then define our budget.”

Daugaard also expressed his frustration with the federal government.  He said that about half of the state’s $4 billion budget is made up of federal funds.

“We’ve gone three years without a federal budget.  We just have to take care of ourselves and not really count on the federal government.”

Britton native and former governor Frank Farrar had praise for Daugaard and Britton.

“Britton is the best and strongest city under 1500 people in South Dakota,” said Farrar.  “Everybody gets along here, and I can’t say enough nice things about this city.  And South Dakota has been voted the best run state in the nation.”

Following the school session the governor and community leaders toured Main Street.  The group viewed a video presentation at the Strand Theatre of the condition of the city’s sewer system and visited several businesses including The Painted Past, Dizzy Blondz, Quarve Drug, the Bloom~N~Bistro, and the Marshall County Prayer Rock Museum.

First Lady Linda Daugaard was also busy.  She was the featured reader at the Britton Public Library for the preschool story hour and also read to students at  Britton-Hecla Elementary.

At noon a roundtable with community leaders was held at the North Marshall Fire Hall and attendees received an update on the state railroad situation from Bruce Lindholm, program manager for the state Department of Transportation.  There have been plans for several years to construct a 110-car grain loading facility in Britton, and indications are that is still a possibility.

Lindholm said that railroad negotiations are complicated but that the line going through Britton is a strategic one in that it allows a shorter route for state rail lines to connect with the Canadian Pacific railroad and ship grain to Vancouver, Canada, for shipment to Asian markets.

He said there are two things presently slowing any plans for the Britton line.  The Vancouver terminal is currently not physically able to handle the volume of grain that would be necessary, and despite putting $10 million of improvements into the line additional work is needed.

But Lindholm said the line holds a lot of potential.

“Once regular traffic is established Britton would be on a major Canadian Pacific route instead of being the end of a short line.  It comes down to what CP is willing to support in service volumes and rates.

“But the railroad bureaucracy is just really slow,” added Lindholm.  “Also, at some point in time, it may be that CP is not the solution and Burlington Northern would be a possibility, but it’s my personal feeling that we’re having more serious discussions with CP than we’ve ever had.  It’s difficult, but we’re not going to quit.”

The construction of a loading facility would definitely benefit area producers.

“As shuttle facilities get built we are seeing 15-20 cents more per bushel for producers,” noted Daugaard.

A roundtable discussion was also held at William Amacher Auditorium Wednesday afternoon and focused on the city’s upcoming sewer project.  Dave Templeton of the state Department of Environment and Natural Resources told attendees that expectations are that the city would be able to obtain an $800,000 grant, along with a $3.6 million low-interest loan from the state to help pay for the project that has been estimated to cost over $5 million.  To qualify for those funds, however, the city will be required to raise sewer rates to about $45 per month.

Plans are to hold an informational meeting for city residents on the sewer project, but Britton Mayor David Kleinberg said the project is not an option.

“We don’t really have any choice and have to get it done right,” said Kleinberg.  “We can do it in phases but eventually will have to do the whole thing.  We’re going to have to bite the bullet.”

About 60 percent of the city’s sewer system needs replacement, which includes 75-80 city blocks. The results of a video analysis of the pipes shows significant deterioration in much of them, so a method of repair called cast in place pipe, which would allow repair without tearing up roads, isn’t possible everywhere.

“There are a lot of horrible messes out there,” said Jay Koch of Helms & Associates, which did the video analysis, at a September city council meeting. “When we looked at the videos, there is a lot of pipe that is basically just a hole in the ground.”

“Employers like Horton are the envy of communities across the state,” said Sutton.  “Horton is a great company, but also a great citizen of Britton, South Dakota, and the region.”

Sutton also presented Britton Area Foundation board members with a $5,000 matching funds check from the Farrar Family Trust for reaching the second-year goal in their fundraising efforts.