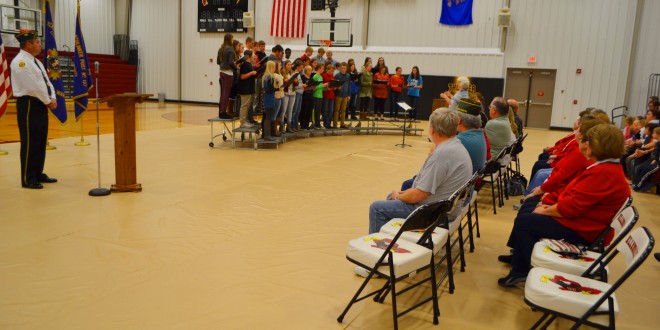 Ellendale, N.D., residents gathered Monday at the school gym for a Veterans Day program. Across America, the service and sacrifice of veterans is celebrated officially on Nov. 11 each year.

By Kristin Vandersnick, for Dakotafire
with additional reporting by Sheila Ring, Onida Watchman

Veterans Day is about honoring those who have volunteered to serve their country, committed to giving even their lives, if asked. Many Dakota communities also take the day to honor Old Glory, the nation’s outward symbol of the freedoms veterans yearn to protect.

“I look at it this way: if the veteran was good enough to raise his right hand and give his life for his country, we should honor that flag,” said South Dakota American Legion State Commander Terry Hanson of Arlington, S.D.

Honoring the flag includes what happens to it when it is no longer in good enough condition to be flown.

“The flag is part of our heritage,” he said. “(Flags) shouldn’t be stuck in a closet or hidden away or thrown in a dumpster.”

The American Legion first outlined a ceremony for disposing of worn-out flags at its 1937 national convention. It prescribes a series of steps in which old flags are presented to Legion commanders for inspection, and then the flags are burned individually over a low, hot fire. A prayer is said as the smoke rises, and at the end of the ceremony, Taps, a song traditionally played during the funeral of a veteran, is played in respect for the retired flag’s “life.” Later, the ashes are collected and buried in a place of honor—usually a cemetery, but some communities bury them in other places, such as the veterans’ memorial in Arlington.

At its 1944 national convention, the Legion reiterated its support for the flag disposal ceremony, deeming it “an effective instrument for promoting enhanced respect for the U.S. flag.” Because of the solemn and dignified way the flags are handled, Hanson encourages communities to involve local students when possible—perhaps even holding the ceremony right on school grounds.

“In Arlington, we usually try to get one of the school classes to come,” he said. “Someone from the Legion gets up and talks to the young people and explains what we’re doing. It’s great to show them how we take care of the flags.”

“Veterans Day is a good time to have the ceremony,” he said. “There’s a lot going on Memorial Day. Flag Day would be another good time to do it.”

This year, the community of White Lake, S.D., is hosting a ceremony on Veterans Day for the proper disposal of worn American flags; they’ve collected more than 75 flags for the event. In Onida, Porter says people have the chance any time during the year to drop off old flags at the city office, where they are collected and then forwarded to him at the Legion.

Porter admits that it takes some work to collect the flags, organize the ceremony and properly carry it out, but to him there is no alternative. If local communities and their veterans organizations didn’t make this service available, the unfortunate truth is that some flags would end up in the garbage—or worse.

“I like to see the flags disposed of in such a way that they don’t get used for grease rags or get used to patch clothes,” he said.

Hanson said it’s up to the individual to determine when his or her American flag should be retired. A tattered, faded or discolored flag, or one with other signs of wear and tear should be retired and replaced. As state Legion commander, he carries new American flags with him when he travels, in case he happens upon an opportunity to politely help someone retire a worn flag and replace it with a fresh one.

Why is this ceremony and the time invested in it so important? Hanson said it’s not only about the flags and the country they represent, but also the veterans who stepped up to serve.

“A flag may be a flimsy bit of printed gauze, or a beautiful banner of the finest silk. Its intrinsic value may be trifling or great; but its real value is beyond price, for it is a precious symbol of all that we and our comrades have worked for and lived for, and died for a free Nation of free men, true to the faith of the past, devoted to the ideas and practice of Justice, Freedom and Democracy.”
~From The American Legion’s Ceremony for Disposal of Unserviceable Flags, http://www.legion.org/flag/ceremony
American Legion flag burning slider Veterans Day 2015-11-11
Kristin Brekke Vandersnick
Share !
Previous: Join the conversation on youth engagement in Doland Nov. 17
Next: Some S.D. schools have given up on filling teacher vacancies
Scroll To Top